A Different Kind of Daughter by Maria Toorpakai / CountryWives

A Different Kind of Daughter by Maria Toorpakai and co-writer Katharine Holstein.

This is an amazing story of Hardship, Love, Struggle and Success. 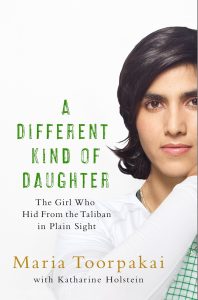 Maria was brought up as a boy, not as a typical Tribal daughter. Her remarkable Father Shamsul Qayyum Wazir made all this possible.

Just before her fifth birthday Maria went on a ‘quiet rampage through the house’, gathered up all her dresses and took them to the cooking pit and burnt them. This was witnessed by her Father who quietly accepted it.

A few days earlier Maria had complained about being suffocated by the dresses and confinement. So her father bought her a yellow T-shirt and shorts. Maria then ‘experienced a great rush of freedom’ as she left the home wearing her new outfit and her new identity. Her Father named her Genghis Khan.

As Genghis, she ran wild in the streets got into fights with other boys and won! She was free to run, fly kites, and kick a soccer ball. Things a girl could not possibly do.

Her Father decided to move homes and travelled long distances so his wife and daughters’ could live in relative freedom. He was a remarkable man as by doing this he put himself in real danger from his family and elders back in the Tribal Lands.

By the time Maria was 10 they had moved 4 or 5 times. Maria wouldn’t go to school so she was in danger of becoming out of control and getting into trouble all the time.

She was saved from this by the close relationship she had with her parents especially her Father. He recognized she would not benefit from a normal upbringing and took her to the local squash club run by the Airforce. It was here that the elite male squad discovered she was a girl and she had to battle against this. She did this by being a superb young squash player. The book tracks the up and down journey she went on to finally achieve her goal – Pakistan’s top ranked squash player.

In a world where lovers are stoned to death, where schools are bombed and doped up suicide bombers routinely blow themselves and others up the Toorpakai family found their own path.

Maria was confined to the home and needed body guards to and from competitions. The Taliban were always watching and waiting to make an example of her as by now she was competing as a woman.

In the end after her sister had sent out thousands of emails all over the world to find a coach abroad, Jonathan Powell, a Briton, living in Canada took her on and she went and lived with him and his family. She now resides on her own in Toronto. Maria still plays squash and has set up a Foundation to help educate and encourage girls back in Pakistan to play sport.