The route from Unapool to Lochinver meant driving due west towards Clashmore and Stoer. This was probably the bleakest part for me of this entire trip – not just because it’s a very remote part of north-west Scotland but because I was feeling lonely and sorry for myself. It’s a shame because it’s stunning countryside and, if I hadn’t been feeling so down, I think I would have loved it. But it was raining, and I wasn’t in a positive frame of mind; I needed to see a friendly face and was getting the horsefly bite saga totally out of proportion.

The road was so narrow and undulating (very steep in places) I felt that if I had to reverse for any reason I would be in trouble, and I had only just headed west (it was the A869) when I came across a shiny Audi with a German number-plate towing a large caravan. The driver looked ashen (he’d probably spent ages winding around the A869) while his passenger slept soundly (probably dreaming about a nice straight autobahn) but fortunately we met by a passing place. Baa breathed in and the Audi slithered past.

Not for the first time I asked myself what I was trying to prove by sticking as close to the coast as I could at all times, because this trip was certainly not meant to be an endurance test and, just at the moment, it felt like one. But there was no turning back and I had to concentrate; the land to my right dropped hair-raisingly into dense vegetation, with occasional glimpses of a sea loch far below dotted with fish pens.

A mist shrouded the furthest point of the peninsular where the road turned back, south and east. Eventually I came to Lochinver, and set about finding a doctor willing to examine my foot. Poor woman, it was 7pm on a Saturday night – my foot was cold and wet (rain, canvas shoes) and none too clean. But… not infected. I should have trusted my instinct, which told me it wasn’t infected and that I was simply feeling homesick. As soon as I left the doctor I felt instantly better and set off on the road towards Ullapool.

It wanted to call in at Achiltibuie because I’d been told of a man with a small boat who takes people out to the Summer Isles, and the only other way to get there is on a big boat from Ullapool. I preferred the sound of the man from Achiltibuie and also wanted to visit the hydroponicum just outside the village. I turned off the main road down a B-road (‘narrow with passing places’) which trailed on and on for miles past small lochs; a few deserted vehicles with bike racks were parked by the side of the road with tents pitched alongside – a road which comes to a halt soon after Achiltibuie. 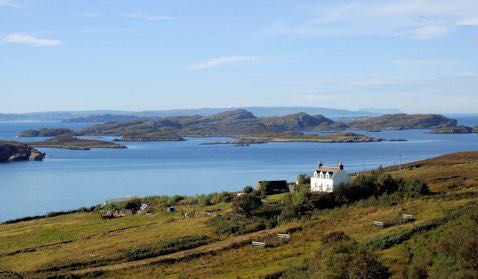 It was dusk by the time I got to the village and I felt absolutely exhausted and pulled in to a gravel square, with a row of cottages down one side and the sea beyond. There was not a soul about and it was still raining, so I decided to stay the night just there – surely no one would mind? I put the radio on and drank a can of Stella while I cooked my supper. When I sat down to eat and looked out the rain had stopped and I realised I was in the Free Church of Scotland carpark… The Wee Frees! They wouldn’t have liked me drinking beer outside their church, but I was too tired to care.

In the morning a smart VW van with blacked out windows drew up and an official looking man got out and looked suspiciously at Baa, but didn’t come over. He opened the gate to the church and went inside for a few minutes and when he came out a small herd of sheep came through the gate with him, having obviously spent the night in the churchyard. I had coffee in the café and learned from a lady there that the man with the boat doesn’t go out on a Sunday, and nor does the boat from Ullapool, and the hydroponicum closed a year ago! So I retraced my steps of yesterday evening – the sun was shining now – and got back on the Ullapool road.