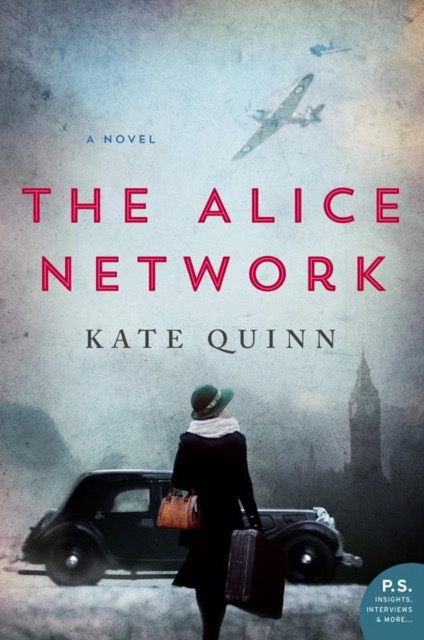 I listened to this book, The Alice Network by Kate Quinn, on Audible and I was completely gripped. I would arrive home and continue to sit in the car listening to it. The narrator Saskia Maarleveld brought the book to life with her accents and interpretation of the characters. This is a book with a really absorbing and fast-paced story. If you love historical fiction and spy thrillers then you will love this.

From the backcover: 1947. In the chaotic aftermath of World War II, American college girl Charlie St. Clair is pregnant, unmarried, and on the verge of being thrown out of her very proper family. She’s also nursing a desperate hope that her beloved cousin Rose, who disappeared in Nazi-occupied France during the war, might still be alive. So when Charlie’s parents banish her to Europe to have her “little problem” taken care of, Charlie breaks free and heads to London, determined to find out what happened to the cousin she loves like a sister.

1915. A year into the Great War, Eve Gardiner burns to join the fight against the Germans and unexpectedly gets her chance when she’s recruited to work as a spy. Sent into enemy-occupied France, she’s trained by the mesmerizing Lili, code name Alice, the “queen of spies,” who manages a vast network of secret agents right under the enemy’s nose.

Thirty years later, haunted by the betrayal that ultimately tore apart the Alice Network, Eve spends her days drunk and secluded in her crumbling London house. That is until a young American barges in uttering a name Eve hasn’t heard in decades, and launches them both on a mission to find the truth . . . no matter where it leads.

The author, Kate Quinn, moves the story so seamlessly between post WWII and occupied France in WWI. The two main women, Eve and Charlie, are strong. Eve is very hardened and effected by her experiences of the war whilst Charlie is more naive and gentle, however she is, in many ways, the young Eve back in 1915 before she embarked on her job as a spy in occupied France. It takes very little time for Charlie to be overwhelmed by all that she discovers as she re-traces her cousin’s life during the war.

This is one of those books that you become totally involved in and you do not want it to end. I read it over the period that included Armistice day which was very poignant as whilst this novel is a fictional story it is one that so easily could have been true. There were many ‘Eve’s’ that were so brave and gave so much during both wars. We will be eternally grateful to them.

Finally it was Reese Witherspoon’s Book Club recommendation so hopefully it may get made into a film.