An unusual way to celebrate a 60th/ CountryWives

In April last year I set off around the coast of Britain in my campervan, Baa. The idea had been cooking in my mind for some time since watching Coast on television with my Mother, who lived with us for the last three years of her life. A feature came up about The Wash and I mentioned that I had never seen it, or knowingly been to Lincolnshire. You must go, she said, as she had such happy memories of Christmases spent with her Uncle Sidney who farmed in the Fens.

Some time later, when Mum had died and our lives had begun to adjust to her not being around, I met a friend, Sylvia, to walk at the Devil’s Punchbowl at Hindhead. I talked about my plan to travel the coast – it would be a celebration of my 60th birthday – and about Uncle Sidney and his potatoes, and that I thought I would like to do it in a campervan. 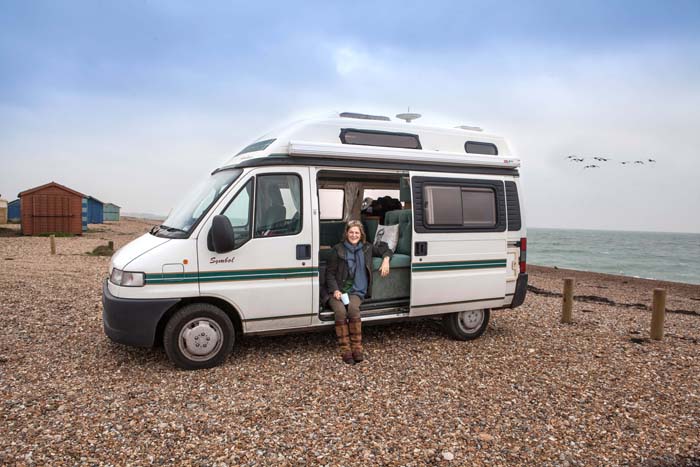 I wanted to buy one and make it lovely and I would write about it so that my grandchildren (when I have any) would know a bit about me and what this country was like in 2014. Sylvia is mad about anything to do with camping, so I was pushing against an open door. As we walked back through the NT car park a small Fiat camper drew in, with a man of retirement age smiling behind the wheel. “That would do,” I said as we went in for a cup of coffee and to talk about campervans.

When we came out the smiling man had his side door open and had a brew on – he was repairing his grand-daughter’s bike. He showed us his van which was rather more workshop than Toast catalogue, more oily rag than patchwork quilt; he had all his tools out and an elderly terrier was stretched out on the bed. He and his wife went on some little trips but mostly he visited his family to do odd jobs. He was on his way home from helping his son-in-law put up a conservatory.

Campervans (or motorhomes, they’re the same thing) are expensive because you are buying a car as well as a home. My search was difficult because of my budget (£15k) and my list of essential requirements (a side-opening door, room to stand without having to push the roof up, sleeping that could be twin or double, a loo). Berty, a friend and a mechanic, helped enormously (where to look for rust, feeling the gears/clutch, when was the cam belt replaced?). He was keen on a bright red Ford “It’s got low mileage, is in excellent condition, has the sliding door and it’s a good price…. (I said nothing).. “You don’t like the colour of the seats do you?” (lightning strikes in orange and red) “Or the walls,” I said (black and grey stripes). It was a non-starter.

I eventually found Baa, a 13 year-old AutoSleeper Symbol, on the internet, for sale with the Somerset Motorhome Centre. My children were staying with my sister nearby and they all hurried to Taunton to see her. My son, Will, drove her and said that considering her age, and the fact that he was driving a small house, he thought she was just the job. 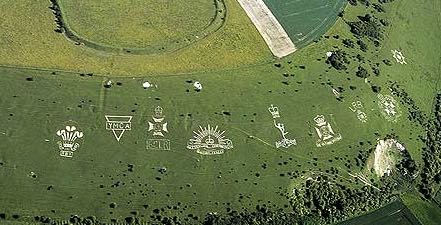 Three weeks later I swung out of the forecourt of Somerset Motorhomes, white-knuckled among the juggernauts on the A303, with a suitcase of reading matter beside me: about filling tanks and draining tanks, and charging batteries and how to operate the loo. On the A30, now driving a little more confidently, I was transfixed by the majesty of the Fovant Badges, carved into the chalk downs above the village to commemorate all the regiments who marched through there on their way to WWI. I nearly took out a hedge. Note to self – sitting so high up can be distracting – keep looking forwards.

Two weeks later I set off for Kent. My journey would begin at Dungeness.

annabelandgracecw
•
Follow
Grace working with her trusted @officialfilofax Read why she loves it in her latest Lifestyle Essentials post which also includes many other products eg @viviscal.uk for thinning hair and a bobble remover for knitwear. It’s all in our latest edition of the Annabel & Grace online magazine for #womenover50 . #annabelandgrace #annabelandgracemagazine #timeofourlives #womenintheir60s #womenover60 #womenover70 #lifestyleessentials
View on Instagram |
1/9

annabelandgracecw
•
Follow
Who would you rather not be without apart from family and friends? For Grace it’s Janice who has been keeping her house spotless for over a decade and she’s a dab hand at sewing too. “Thank you J - you truly are my treasure!” . #housekeeper #houseproud #lifesaver #couldntdowithout #personaltreasure #bestkeptsecret #annabelandgrace #annabelandgracemagazine #womensupportingwomen
View on Instagram |
3/9

annabelandgracecw
•
Follow
I found these pics of Grace which were taken a few years ago by a wonderful photojournalist and friend Clive Limpkin, who sadly moved on in 2020 to that great photo studio in the sky. He worked for the @dailymail for 20 years. He was award-winning for his iconic images of Derry (the Battle of Bogside) in the late 1960s and early 1970s and they came to define the NI Troubles. I love these photos of Grace as Clive has managed to capture her fun-loving spirit and ‘joie de vivre’. Nothing beats a smile and even better laughter! We miss Clive but he is never forgotten. . @alexlimpkin . #grace #annabelandgrace #womenintheir60s #womenover60 #photoimage #laughter #greatsmile #timeofourlives #naturalbeauty
View on Instagram |
4/9

annabelandgracecw
•
Follow
There is a house in Henley-on-Thames that is for sale. It is called Bird Place - grade 2 listed with wonderful river frontage. One of the current owners is an artist and she regularly paints the hoarding that is roadside reflecting the seasons. This one was last winter’s mural but it seems perfect for the cold spell🥶 that we are all experiencing so I thought I would share the pics. Such a great way to cheer up what would have been a dull wooden fence. . #henleyonthames #birdplace #mural #coldspell #winterweather #annabelandgrace #annabelandgracemagazine #lovewherewelive #riverthames #riverside #riversideliving #wrapupwarm #frost #snowscene #wallart
View on Instagram |
5/9

annabelandgracecw
•
Follow
Last night I had a supper party - it was a hangover from Christmas ie friends who we had had to postpone for one reason or another. We celebrated Chinese New Year - the year of the rabbit. So we all dressed up a bit (sparkly boots and a few seasons ago skirt from @hopefashion) Dressing up a little made it all feel a bit more special. What to cook? No not Chinese as I am not very good at that! But no problem as Grace had just done a fabulous post - ‘Tastebud Pleasers: Grace’s favourite recipes of 2022’ and so I made Roasted Chicken Orzotto Milanese-Style (@janelovettcookery ) followed by a Plum and Apple Galette (@riverford ) We started the evening with a @pinkstergin G&T! . #supperparty #saturdayevening #supperwithfriends #dressingup #sparkle #recipes #tastebudpleaser #cookinginspiration #annabelandgracemagazine #annabelandgrace #womenover50 #womenover60
View on Instagram |
6/9

annabelandgracecw
•
Follow
End of another week and the next edition of A&G complete. Newsletter gone out to our subscribers. Time for a coffee and even though it is really cold there is nothing better than a quick bout of fresh air. We have both been trying to keep up our daily walk and exercise even just a quick 10 minute stretch in the morning is better than nothing. I have started doing some breath exercises too as I suffer from sinusitis so I think it may help. Grace is kept busy looking after her nonagenarian mother and stepfather. I spoke to her during the week and she was pushing her mother in a wheelchair around Waitrose. I think she can count that as exercise! Mobility is so important and so we need to keep fit and strong for as long as we can. Having said all of that both of us have had niggles with our hips recently. I am taking Strong Bones from @futureyoucambridge and doing lots of yoga with @yogawithmaddy.co Maddy has taught me some great stretches for my hips and my lower back which I try to do daily. Wasn’t it Mae West who said, “Getting old is not for the faint of heart.” Youth and adulthood are also not without their challenges but if you can keep a smile on your face and all body parts moving you are doing well!! Have a great weekend, A&G xx . #womenover50 #womenover60 #womenover70 #annabelandgracemagazine #annabelandgrace #onlinemagazineforwomen #weekend #coffeebreak #womenintheir60s #womenintheir50s #keepingmoving #keepingfit #smile
View on Instagram |
7/9

annabelandgracecw
•
Follow
Even on the coldest days it is good to get out and blow the cobwebs away. Standing on Henley bridge certainly does that as it can be like a wind tunnel! Anything is better than the rain! What’s the temperature where you are? It’s a healthy +2.5 here - a bit of ground frost but not enough to keep us inside all day. Personally I love the frost as the dogs don’t get so muddy on a dog walk. Have you read our latest post about ‘Dirty Dogs’ and some of the best products to keep them clean. . #lovewhereilive #frost #frosty #colddays #winter #betterthanrain #dirtydogs #cleaningdogs #doggroomingtips #henleyonthames #doodlesofinstagram #annabelandgrace #annabelandgracemagazine #womenover60 #womenover50 #womenover70
View on Instagram |
8/9

annabelandgracecw
•
Follow
Grace at Japan House, London. Amazing bento box for lunch after a morning of culture at the V&A. She went to see the Korean Wave which was a colourful and fascinating exhibition. She thoroughly recommends it. @vamuseum @japanhouseldn . #bentobox #japaneselunch #dayout #culture #exhibition #koreanexhibition
View on Instagram |
9/9
View on Instagram
Tweets by @Countrywives