It’s a long time since Grace and I have been surrounded by so many young Mums and their babies but this weekend at Britmums Live there were many things we did that we have not done for some time. 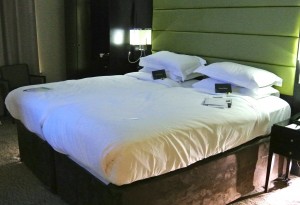 The first was sharing a double bed! We arrived on Friday at 2.30 pm at our very comfortable hotel room at The Montcalm to be given a knowing smile by the concierge who checked us into our room. Even though we had emailed and called they had still failed to give us twin beds as requested. However by the time we climbed into bed 9 hours later, we were so exhausted I think we could have slept anywhere.

It was not only the first time we had attended Britmums Live but also the first time that we had attended a blogging conference. To see 500+ bloggers, mostly young Mums, a smattering of men and a few older wrinkly Mums in one room at the opening speech by Susannah and Jen (our hostesses) was quite a site. So many well behaved babies, no screaming, there was even one aged just 3 weeks. I am not sure I was out of my pyjamas when any of my children were three weeks old let alone at a conference, listening to speakers, taking notes and winding a baby all at the same time – this takes multi-tasking to a whole new level.

The awards ceremony was a real ice-breaker as champagne flowed and everyone chatted to old and new friends alike. The only criticism I have is that the badges we all wore, clipped to our jacket lapels, bearing our name and website address were unreadable for Grace and I so please may I apologise now if you met with two slightly older women squinting at your boobs during the course of the weekend!

Countrywives had been shortlisted for an award in the Social Media category but lost out to MummyBarrow who was a very well-deserved winner as you will know if, like us, you follow her on Twitter! She is a blogger-pro and later in the weekend gave a talk with Mammasaurus (another award winner) about Social Media. I think we may have been in the wrong category probably because our readers, being of the older generation, had such a struggle finding the voting page (their lack of expertise at navigating the internet rather than any failure on the Britmums part) and since they do not understand what a blogger is, they probably had no idea what Social Media meant so they just ticked the box because the word social does apply to Grace, Ellie and I – we do love a party! Anyway we were happy just to be there and to be included in the occasion and happy to see Spencer, win the Writer award. I could go on and on but you can see all the brilliant winners on the Britmums website.

After a dinner a deux, we hadn’t yet made any good enough friends that we could ask them to join us, we collapsed into our shared bed!! The following morning, after Grace had insisted we find her a Starbucks to get her first caffeine hit, we then attended the speech by Katie Piper which no words can do any justice to. All those Mums and babies and you could have heard a pin drop, as we hung off her every word and felt a terrible sense of injustice at the amount of suffering this one girl and her family have gone through but nothing that is ever thrown at this lady, even acid, is ever going to knock out her spirit. If I had only heard Katy speak the weekend would have been worthwhile.

Next up Grace and I split up as there were so many talks to go to and so I did not have my comfort blanket there when I gave my talk on innovative blogging. I felt wholly inadequate as I think everyone in the room was a brilliant blogger in their own right but hopefully they can see that joining up means a problem shared is a problem halved and makes blogging slightly less lonely and on those days that you have writer’s block you have your friend to help you.

Some of the other brilliant speakers were Paul Armstrong of Digital Orange Consulting talking about Social Media was an absolute powerhouse of information so much so I think our brains went into overload. What Paul doesn’t know about this subject could be written on a postage stamp though I doubt he ever uses something as slow as Royal Mail to deliver any of his messages!

I don’t think I have tried to take in so much information over a short space of time since I crammed for my A levels and that was over 35 years ago!

There were many lighthearted moments, lunch with Katy Hill in the courtyard dodging the rain, and a chat with Lucy Cavendish before I am sure she went into the Men’s loo though she assured me that it was the Ladies because she had used it before!

People may not know what or who bloggers are but they are a powerful force of savvy, opinionated (in a good way), slightly wacky (in a fun way), lively ladies (and some men) who if you don’t know them now then you are missing out on a whole new world.