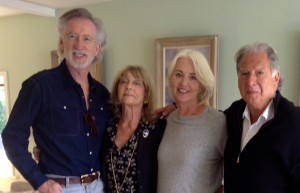 This blog is for you Grace as I know that you have long been a campaigner for the forgotten and often ignored group, women over 50. It was the inspiration for our blog and through it we have met and conversed with many wonderful women.

Some months ago there was a Channel 4 TV programme, THE FABULOUS FASHIONISTAS, which gripped all of us ‘slightly older’ ladies as it showed that life can still be fun and full of fashion even as the hair turns grey! One lady in particular inspired Grace as she had the flexibility of a 20 year old and a razor sharp mind to match and that was Dame Gillian Lynne, a British ballerina, dancer, choreographer, actress, and theatre/television director, noted for her popular theatre choreography associated with the musical Cats and the current longest running show in Broadway history, The Phantom of the Opera, who is aged 88 years young! So when my OH announced to me, many months ago, that he was producing a new Sherlock Holmes play which would be previewing in Henley-on-Thames at The Kenton Theatre I took little notice until last week he asked if I would mind having the lead actor Peter Land to stay for the run. So of course I took to Google and discovered that Peter has been the husband of Gillian Lynne for 34 years, he is 28 years her junior!! He arrived last Thursday and is absolutely divine, full of fun and charm and after no more than a few minutes we got on to talking about his wife.

Earlier this year she released an exercise dvd for ‘oldies’ whilst more recently she has been in the news as she is recreating a ballet that she herself performed to the troops during WWII aged 17 years. So when Peter announced that she would be popping in today for lunch I was more than a little excited to meet one of my heroines. As I have got older I have realised how difficult it is to ward off old age and all that it brings with it and so I have great respect for women who have managed and continue to manage to stay young. Gillian is a theatrical legend who exudes energy and with it a 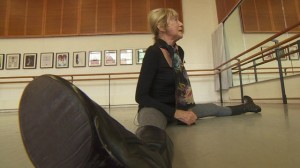 wicked sense of humour. Watch the BBC clip HERE which includes her tips on how to stay young and flexible and find out why we all have to keep our crutches open!! What I also admired in this charismatic lady is that she has kept her mind so young and sharp and continues to work and create. She had travelled down from Birmingham where she is rehearsing Shadows of War with the Birmingham Royal Ballet, a quick lunch with Peter, and then onto London to go into pre-production for the revival of the musical Cats! Was I impressed….Yes enormously.

She returns to Henley on Thames on Wednesday for Peter’s first night as Sherlock Holmes in To Kill a Canary. I have only seen snippets in rehearsal but Peter was born to play Sherlock and he is showing all his RSC training and gives a formidable performance. I cannot wait for opening night but better get practising those splits!