I crossed from Claonaig on the Mull of Kintyre, to Lochranza on the north side of Arran. Halfway across the small stretch of water, the heavens opened in a sudden and violent torrent. It was hard to see the road out of the harbour, with wipers going at top speed, and I only just noticed, and avoided, a small group of chinamen in very inadequate raincoats. They were holding up a sign to Brodick, where I was heading, mid-way down the east coast. To stop? Or not?

I didn’t. Practicality won over charity. How would I ever get the watermarks out of my jade velour upholstery? I couldn’t make them stand all the way around Goat Fell (spectacular, and at 870m the highest point on Arran) to Brodick, and the carpet would never recover (Baa’s carpet was fitted, not removable with vinyl underneath). So no, I drove on with hardly a backward glance and just hoped that some other, kinder person would take pity on them. 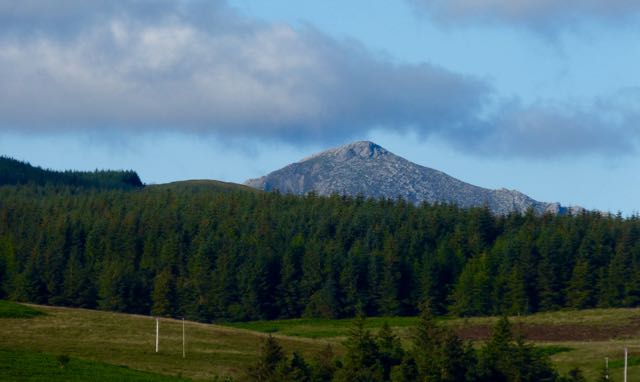 I pulled in to the Douglas Hotel in Brodick and waited 10 minutes for the rain to subside enough to dash in, under my trusty Canterbury Cathedral umbrella, to have a restorative drink and use the wifi. It was monsoon conditions. I had parked on the front, where the ferries come in. Despite thundering rain on the roof all night and a few ribald drunks sloshing past, I slept well. But by the time my friend Cathy, who lives near New Galloway and was coming to spend a couple of days with me, arrived on the ferry the next day the storm had passed.

We looked around Brodick Castle, once home to the Dukes of Hamilton but National Trust now and, that day, bathed in sunshine. Then Cathy recommended a visit to a good cheese shop below the castle, and Arran Aromatics next door where she did her Christmas shopping. Driving clockwise and aiming for a campsite at Blackwaterfoot on the west of the island we looked out to Holy Island, a sacred site in the Firth of Clyde and, further on, to Ailsa Craig, a volcanic island, neat as a bun, where blue hone granite was quarried for curling stones. 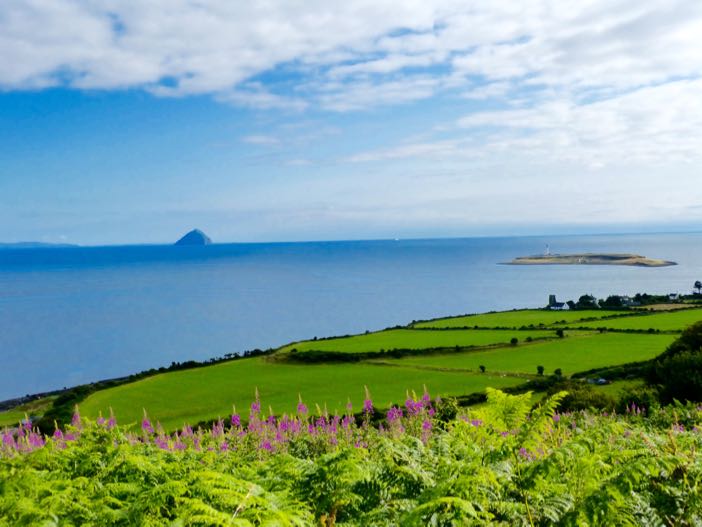 There are lovely, remote, sandy beaches on the west side of the island. A few people were gathering up their buckets and spades, but by the time we had walked around some of the standing stones on Machrie Moor it was getting late and we set off to find the campsite. It was small and charming with pitches leveled into a sloping field, and occupied by just a couple of caravans, one other camper and a few tents.

There was lots of drama when we took our plates to the washing-up shed in the morning. First, the people in one of the caravans had had the side ripped off their car by the local bus. They had to sort out insurance and get back to Suffolk. Secondly, one of the two lady cyclists in the other camper van had had an epileptic fit and been air-lifted to hospital on the mainland. Thirdly, the couple in another caravan were not speaking to each other because he had something wrong with his insides and he’d got stuck into the whisky and they’d had a terrible night.

We packed up and hurried away to catch our ferry to Ardrossen.