My Visit To Auschwitz-Birkenau Memorial was life changing

A visit to Auschwitz-Birkenau Memorial has been on my husband’s and my ‘to visit list’ for a long time. I don’t know what made us very suddenly book it but we did. My husband is Jewish so it is part of his identity. His family came from Poland so whilst he does not have any close relatives that perished in this death camp he knows that he must have lost relatives on his mother’s side. We have both been to other Nazi concentration camps, Dachau and Bergen-Belsen, plus we have been to Yad Vashem, the Holocaust memorial in Israel.

However it is Auschwitz that permeates modern culture and so to go there is to enter the belly of the beast. I think it is a must visit for everyone, if they can, as it is a constant reminder of what atrocities humans are capable of. We must never let it happen again.

“Those who do not remember the past are condemned to repeat it.” George Santayana 1863 Madrid 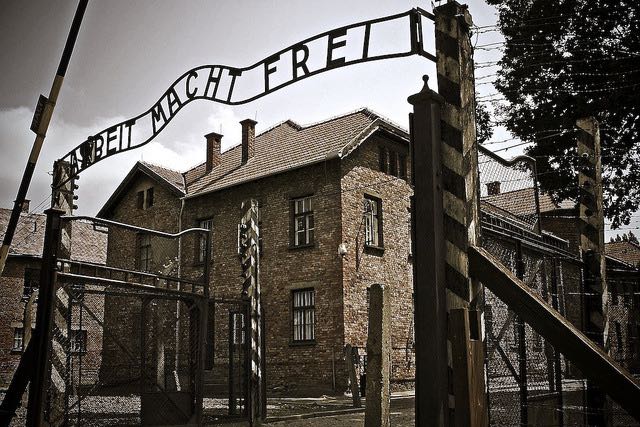 We arrived in Krakow late on Wednesday evening after a short two hour flight and checked into our hotel. It was set in a time warp and apart from the TV everything else looked like it had not been changed since the 1930’s. It was overwhelmingly brown!

I am sure that you all know so much about the Auschwitz-Birkenau Memorial so I am hopefully not going to repeat what you already know. I want to focus more on the effect the visit had on all of us as we were also travelling with two Jewish friends.

Before we left I was amazed at how many of my friends said they wanted to make this trip, it seems like it is a right of passage at a certain age. I think this may be due to the fact that as we get older we are more aware of our own mortality. We have also come to realise how wicked the world can be yet we still do not seem to learn from past mistakes.

In my case I felt such terrible remorse that the world had let down the 1.3 million who had been murdered in Auschwitz-Birkenau.

We got up very early on Thursday to catch the tour bus to the Auschwitz-Birkenau memorial and it was a grey, damp day which was probably a good thing as it reflected our mood.

As you approach Auschwitz-Birkenau you pass through the village of Oswiecism (the same name – but in Polish) which is a pretty place with pastel coloured houses, a church, all of which surround a village square. Apparently there is a Tesco there but I did not see it. Then you see the solid looking red-brick buildings surrounded by wire and this is Auschwitz 1.

Auschwitz 1, as the first compound is called, was originally a Polish army base which was adapted by the Nazis into a prison. It is now a museum managed and maintained by the Polish government. As you enter you pass beneath a replica of the sign reading Arbeit Macht Frei (Work makes you free – an ironic statement at the outset). You then pass the spot where the band played as the workers marched in and out. The rhythmic timing helped to keep them moving. 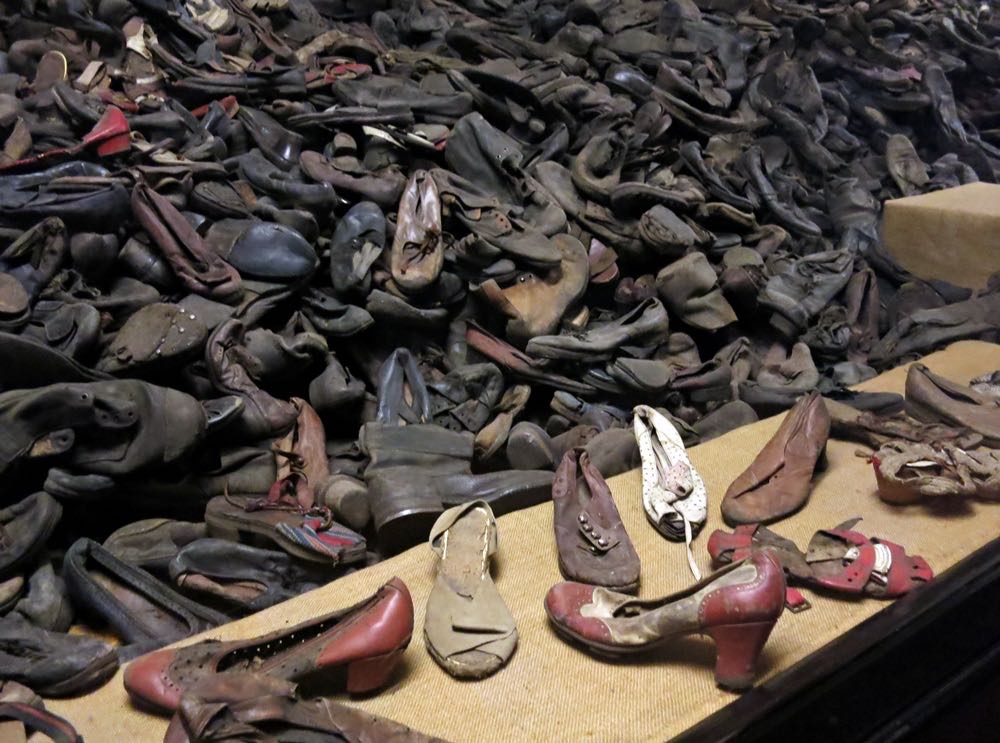 Everything is very clean so you have to imagine the stench, the lice, the rats, the effluent and the extreme cold. You see exhibits of old cans of Zyklon B, the crystals used in the gas chambers, an enormous pile of human hair, hairbrushes, pots and pans however it is the pile of shoes that humanised it for me. There were some fashionable heeled shoes, some open-toed, woven, wedged sandals, styles that could have been worn now but were certainly not suitable for entering a work camp. A pile of suitcases inscribed with names and birth dates made for pitiful viewing.

My feelings throughout this exhibition was how could any race come up with such a plan of ordered and controlled horror which inevitably resulted in death. Even after the Nazis had killed their victims they extracted any gold teeth and sent the gold back to Germany to be melted down to fund the Third Reich. The human hair had multiple uses including being made into rugs. Who would want to stand on a rug made out of the hair of people who were murdered? It was all completely beyond the comprehension of any decent human being.

However it was the co-operation of many of the other countries that hit me. They rounded up and sent their Jewish population to the camps, under the instruction of the Nazis. Bulgaria refused and so there is no evidence of any Bulgarian Jews being received at Auschwitz. I wondered if other countries had taken Bulgaria’s lead and behaved so stoically it could have turned out differently.

It made me understand much more of how Jewish people identify so strongly with their religion, more than their nationality. No-one wanted them, they were considered less than human by the Nazis, a scourge to their ultimate plan to dominate Europe with a pure Aryan race.

Seeing the thousands of prosthetic limbs in a display cabinet, possibly once belonging to Jewish Germans who had fought in WW1 for Germany but because they had lost a limb they were no longer fit for life. Handicapped people were also sent to these death camps as they too no longer had a right to live. It was the ultimate racial cleansing that the world has ever witnessed. The rest of Europe was focused on WWII whilst these people perished. I felt the loneliness of in the barracks, how the inmates must have wondered why no-one came to their aid. The systematic cleansing began in 1942 and continued for 3 years with no intervention from any European country even though the Governments were aware of what was going on i.e. it was more than their original belief that it was forced labour.

Our final view of Auschwitz 1 is seeing, from a distance, the house where the Camp Commandant lived, Rudolf Hoess, with his wife and 5 children. However within sight of this house was the place where he was eventually hung having been arrested and finally tried by the Polish authorities and found guilty of war crimes. I could not come to terms with the idea of this normal family life and then Rudolf’s short walk to Auschwitz 1 where he transformed from loving husband and father into a brutal, cold and callous murderer. 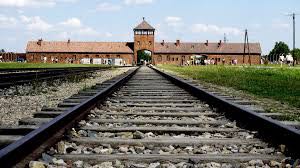 We then went on a short bus ride to Auschwitz-Birkenau. The entrance is that iconic image, that we all know, of the railway track going through the archway heavily guarded by the Nazis. As you enter my immediate feeling was a comprehension of the vast size of this camp, it was completely overwhelming. It is just an endless area of total bleakness. The buildings are neat and the design was very ordered and well-planned as our guide pointed out. However I could not help but wonder how a group of humans could sit down to discuss and design this camp with no feeling of guilt or morality. Who were these people? I obviously know the answer but still I could not believe they were once members of the human race?

As the new prisoners arrived by train they disembarked, lined up and one man decided their fate. If you were strong and able, or could offer a needed skill or trade, you were admitted into the camp and the rest of the passengers were shepherded unwittingly straight to the gas chambers. We asked how did they do this so willingly? The answer was that they had just experienced a hellish journey. They had been crammed into carriages with no sanitation, food or water and were filthy so when they were told by the Nazi guards to walk this way for a shower and clean clothes they believed them.

They were then gassed, cremated and their ashes were used later as fertiliser. 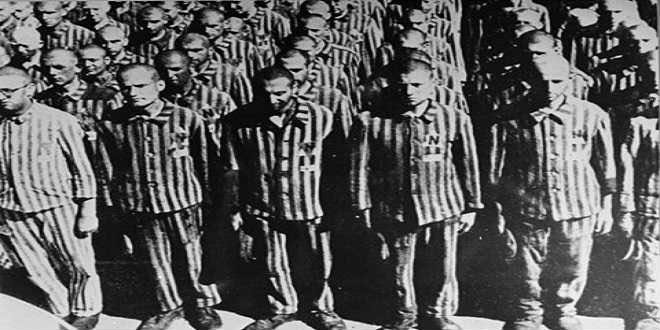 We followed the path of those who were chosen to live, for the moment. I thought of those hundreds of thousands of feet who had trod that path before us, with little hope left in their lives and what limited future they had was going to be full of intense degradation and pain. The realisation must have dawned on them very quickly as they would have seen the prisoners in their genderless striped uniforms, with shaved heads, emaciated bodies stripped bare of all humanity. One cannot begin to imagine the fear that must have overwhelmed them at that point.

We visited the children’s block, any child under 10 years was murdered on arrival however the older children were used as forced labour. They were separated on arrival from their mothers and they were then marshalled off to live together in one of the barracks with 6 to a bunk. It did not take much imagination to comprehend the filth, disease and fear that would have prevailed in that one barrack with only one adult to supervise them.

There were some paintings that have been preserved showing children playing and going to school. We understand that these were done by one of the workers who must have been a decorator with access to paints who wanted to make the children’s barracks more livable in.

It was then that the feeling of intense horror hit me. The truth had finally come home in all its reality, no longer cloaked in mist. We have read the books, viewed the films but from the comfort of our own homes. However here I was now holding the edge of a bunk bed that thousands of terrified, young, innocent children had held longing for the arms of their parents with no understanding of what they had done wrong. They had been born Jewish and in the eyes of the Nazis there was nothing worse and their lives were totally worthless.

Death was all that was left for them and ultimately, unlike the sign at the gate, it was only death not work that would set them free.

The truth of the Holocaust, unimaginable before, had in a few hours come home and will always haunt me and left me wondering once again where was the rest of the civilised world during this inexplicable time?