Agreeable Autumn Escapes For my husband, a change in seasons is as good as a holiday. I certainly agree that it’s nice to feel a cooler breeze in the evening and the crunch of leaves underfoot. But personally I’m looking for more of an actual holiday? Which is fine, because my idea for an autumn escape to somewhere pretty in the UK was met very favourably. I have a good idea of where I might like to go, but I definitely need help on where to stay. Hotel Guru has given me recommendations, so now it’s just a matter of agreeing on our favourite! 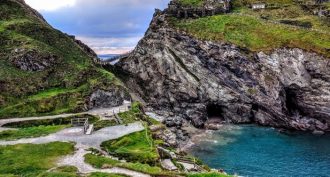 With its incredible coastlines, beautiful beaches, wild moorland, secret valleys, deep, high-sided lanes and bucket-and-spade seaside villages Cornwall is one of the most memorable English holiday destinations. And Autumn is a fantastic time to visit Cornwall, with all the school holiday crowds back for the new term, but plenty of warmth lingering. As the season progresses the average rainfall increases, but there’s still plenty to do, especially if you enjoy blustery beach walks. 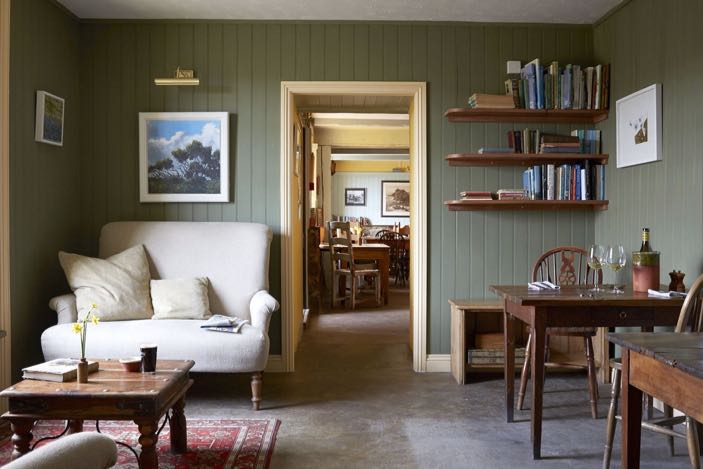 Where to Stay? The Gurnard’s Head Hotel is a charming inn surrounded by breathtaking Cornish countryside. Much loved by walkers, the Gurnard’s Head is just five minutes from the South West Coastal Footpath. But it has also just won an award for having the UK’s best pub wine list – and the food is excellent too. There are just seven rooms with simple en suites, comfortable beds and soft linens. Rooms start from £125 a night, and between the 28th of October and the end of March you can stay B&B and dine at the Gurnard’s Head for £160 per couple (midweek only).

Practical Details: If you’re flying then Newquay or Exeter are your closest airports, but the high speed train service between Paddington and Penzance will definitely be more convenient for some of us, and it’s a pretty good service. Supposedly it’s the sea around Cornwall that helps regulate the temperatures here, keeping them mild in both winter and summer. 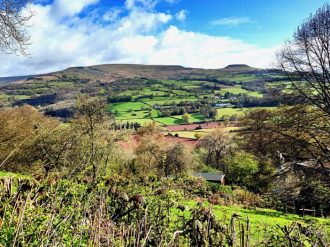 The Brecon Beacons National Park in Powys has scenery to swoon over. From the Beacons themselves, a group of plateau-topped hills covered in grasses and heather, to the glacier-scarred mountains to the north with their glacial lakes, to the dense forests – the kind of places you’ll have read about in fairy tales. And whilst September is one of the driest months in the usually moist Brecon Beacons, October and November offer a return to misty, mysterious form, which is quite magical. 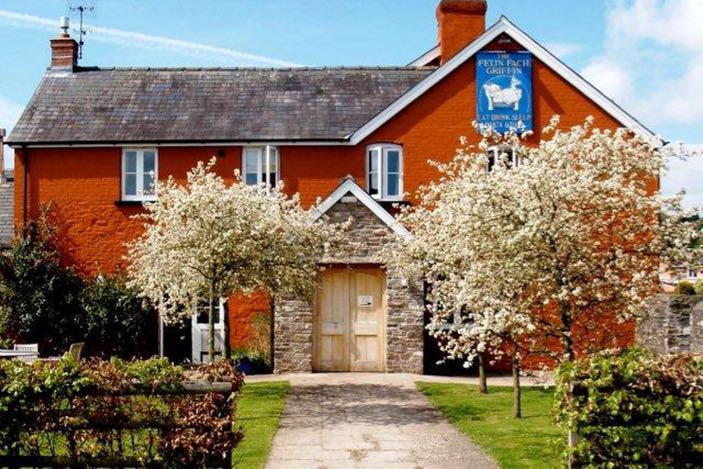 Where to Stay? The Felin Fach Griffin is the sister hotel to the Gurnard’s Head, another award-winning gastro-pub in an outstanding spot, this time close to the Brecon Beacons. Just like its sister, the Felin Fach has just seven rooms and is very popular with walkers. They also have similarly comfortable and welcoming rooms with comfortable beds, and a fantastic open fire in their barn-esque bar/dining room. Rooms start from around £135 per night, and they’re also doing a similar Dinner and B&B offer to the Gurnard’s Head for £170 per couple midweek. You’re also close to Hay-on-Wye, and the Black Mountains.

Practical Details: The Brecon Beacons are wonderfully remote feeling, but actually quite easy to get to. Cardiff is the nearest airport, but the train is probably the way to go, with hourly direct trains to Abergavenny on the Cardiff-Manchester line. You can also travel to Merthyr Tydfil from Cardiff, or Llandovery from Swansea or Shrewsbury. Autumn is one of the best times for the Felin Fach, if you’re off walking the Beacons in the day then there’s just nothing better than arriving back to a roaring fire and fantastic, locally sourced food.

When you’re out there, amidst the expansive, rolling views of hills and mountains, and sheep-studded fields bordered by ancient stone walls and scattered with stately homes and limestone villages, it’s easy to see why Derbyshire’s Peak District was selected as the UK’s first National Park. It’s less easy to see how the Peak District might have come by its name. It’s less ‘peaky’, more rolling moorland district: with hills and gentle valleys, gorges and lakes and gritstone escarpments. September is the driest autumn month, and in October and November the average rain ratio is about one in two days. But there’s still plenty of light and sunshine too, and it’s quite mild until the end of October – though it does get cool on the hilltops. 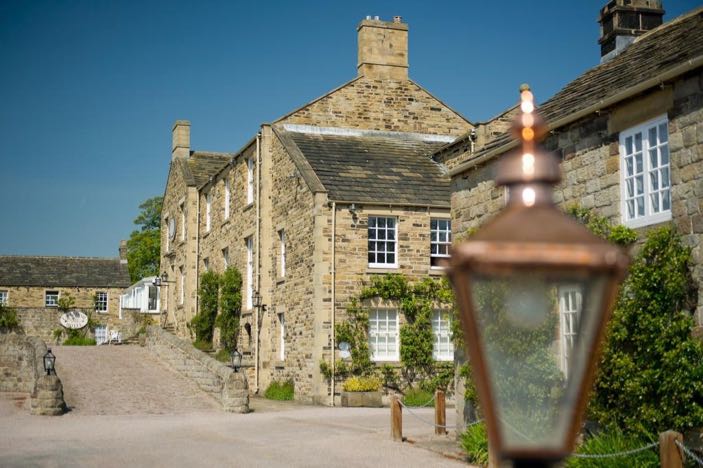 Where to Stay? The Cavendish Hotel is a beautiful country house hotel with stunning views of the Chatsworth estate and the surrounding Peak District. This is another brilliant place to stay for walkers – there are some fantastic trails which pass right by the entrance to the hotel. And for foodies – the restaurant has won several awards. Plus, the rural decor, with open fires, oak beams and antiques, adds to the feeling of being at a relaxed, but old fashioned house party. There are 24 rooms which start from around £215 per night.

Practical Details: Aside from driving, the easiest way to get to the Peak District is probably by train, with trains for Manchester, Derby and Sheffield. If you have to travel by air the closest airports are Manchester and East Midlands Airport.

A Mini-Break from London? 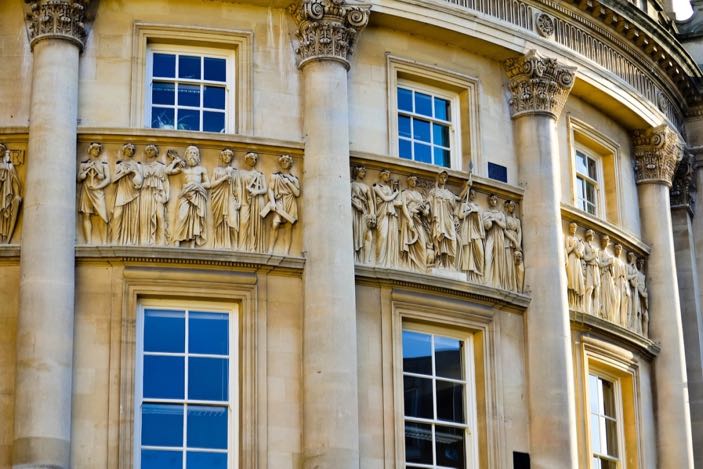 Bath is only 90 minutes from London by train. Which is a short jaunt considering the beauty and history of this ancient spa town. It’s got incredible architecture, the rather romantic legacy of Jane Austen, historic Roman Baths, and all that charming honey-coloured stone. And it’s much better outside of the Summer season when overseas visitors descend in their droves to soak it all in. If you want to see the trees in all their colourful glory Autumn is the time to visit. 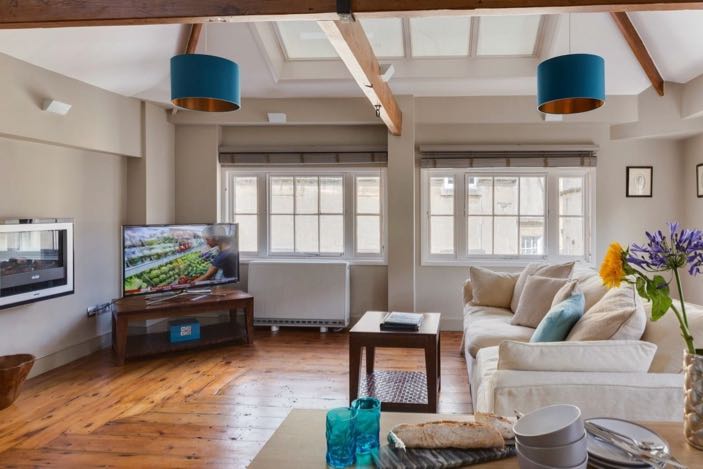 Where to Stay? Dreamstays are a selection of chic, comfortable apartments and houses right in the centre of Bath. There’s a property to suit every need, ranging from romantic boltholes to entire smart townhouses able to sleep up to ten people. All have all the creature comforts you might need, from properly equipped kitchens to rain showers. Properties start from around £125 per night.

Practical Details: Trains between London Paddington and Bath Spa take around 90 minutes, but if you’re not coming from that direction, Bath is also only 19miles from Bristol Airport.

Or you could escape to Dedham Vale in Essex, John Constable’s painting grounds, a countryside of meandering waterways, peaceful lanes, picturesque old cottages and plenty of greenery. You might not see jovial farmers atop horse-drawn carts these days, but not much else has changed around here. Autumn is especially lovely in the Dedham Vale, and there’s often an ‘Indian Summer’ feel, but it’s also spectacular once the leaves really start to turn. 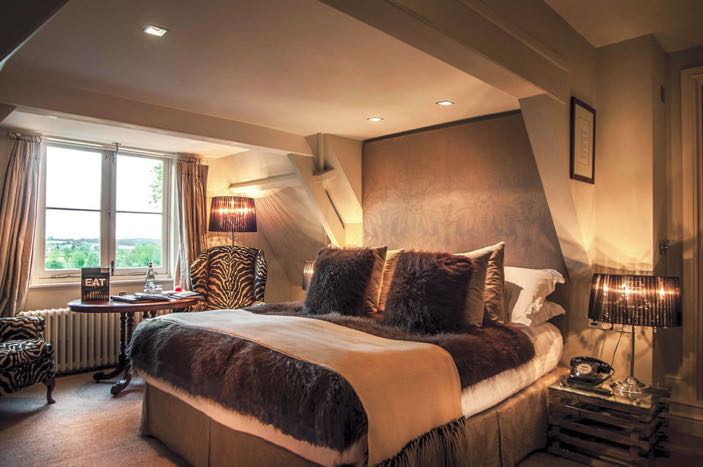 Where to Stay? Maison Talbooth is a rather quirky Victorian country house hotel in the heart of Essex’s Constable country. There are just 12 rooms so it’s popular with groups, and there’s a pool, spa and tennis courts. Three of the rooms have their own hot tubs, but they’re all individually designed so have a look at the photos before you make your choice. Rooms start from £220 per night – though they do have some good offers on over the autumn period, with room and a three course dinner starting from £165 per night Sunday through Thursday.

Practical Details: The nearest station to the Maison Talbooth is Manningtree, which is connected to Colchester. You can also catch a bus from Colchester.  And if you need to arrive by air, the closest airport is Stansted.

Still not sure where to holiday? Lots and lots more in-the-know ideas from Hotel Guru here