You know what you are getting with autumn. Unlike its predecessor, the mercurial season of summer, which promises much and so often disappoints, autumn is a reliable friend. At times, this season can dazzle us with its sunlit beauty, but we are also quite accepting of its drizzling rain and damp afternoons spent seeking conkers in the woods. Somehow our expectations are not so high. We understand that autumn is easing us gently out of summer, preparing the ground (quite literally) for the privations of winter. 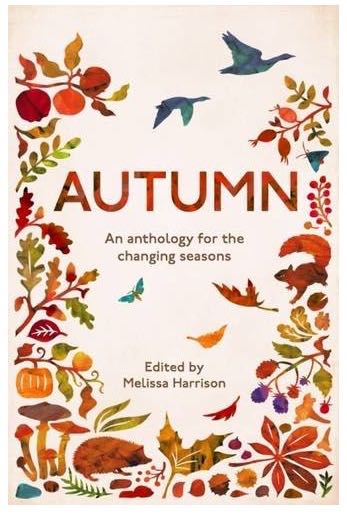 Autumn, An Anthology for the Changing Seasons, captures this blend of melancholy, moribund fauna and mournful beauty, so often associated with the season of fall. This is the third book of four titles in the series, published by the Wildlife Trusts to celebrate the British seasons. Like Spring and Summer before it, this anthology uses environmental writers, bloggers, poets and naturalists to document all aspects of wildlife. The book is attractively produced, with a thick dust jacket, and would make a lovely present for any one who is nature-inclined.

When I was at school, I had to learn that well-known Keats poem, Ode to Autumn, off by heart. Ever since, at this time of year, I always think of those opening lines: “Season of mists and mellow fruitfulness”. Oddly, this poem has been left out of the anthology although the editor and novelist Melissa Harrison refers to it in her engaging introduction (incidentally a passage as good as any other in the anthology). Later in the book, blogger Louise Baker gives echo to some of Keats’ sensuous display with her own modern take:

“Autumn is the heat of a roaring bonfire, the scold of the stray ash, and the smothering curtain of smoke that envelops you; it’s the fizz of sparklers clenched in cold fists; the warmth of your breath as it escapes your lips.”

As with the other anthologies, many of the passages I enjoyed most introduced a narrative thread into their descriptions of the season. In this book, we have dormice hiding out in the attic, returning again and again after they have been humanely trapped; nervous hawks at the fair; scavenging otters; and the departure of some friendly Friesian cows to mark the end of summer. My favourite, however, is an encounter between nature writer Daphne Pleace and a red stag with his “thick, russet-brown neck mane” outside her motorhome in the northwest of Scotland.

Another paean to the stag is Ted Hughes’ powerful poem which comes towards the end of the book: “And the stag doubled back weeping and looking for a home up a valley and down a valley…” With a sense of drama and pathos, Hughes captures that age-old confrontation between the hunter and the hunted, against nature’s backdrop.

This is a book to dip in and out of, preferably while relaxing by a roaring fire after an afternoon traipsing through some crackly woods. Much of the writing is evocative and will no doubt spark memories of childhood with sparring conkers and heaps of mouldering leaves to hide in. I can’t think of a better way to mourn the passing of summer and welcome in the next phase of nature’s inexorable cycle.

This book is available from Amazon

CW has also reviewed the anthologies entitled Spring and Summer, which are part of the same series.