Back Packing Granny can navigate the world but not the Earls Court Travel Show... - Annabel & Grace

OG (Other Granny) and I had a wonderful adventure last week. We went to the Travel Show at Earl’s Court.

Now I have made my way across Africa several times, both in a very ancient Hillman Imp, and on foot, and I have followed maps from all over the world for the last 50 years, but, I kid you not, the numbering system for the travel booths at Earls Court is beyond the wit of any human being. To whom it may concern please change the system next year!

The first thing that caught my eye was a wonderfully battered, huge wheeled coach called a Dragoman. It is an up market version of the Top Deck which in the 60’s and 70’s used to travel from China to Europe, filled with eager testosterone-filled Kiwis and Aussies.  I believe that dear Barry Humphries, a.k.a Dame Edna, came that way. The journey was hugely exciting, no-one had credit cards in those days, and everyone pitched in to get the bus out of the ditch, clean the mud and do the cooking! The travellers slept in bunks on the top deck, and the close proximity was the beginning of many a holiday romance, though I can tell you if you managed to stay with someone after that journey you could certainly manage for life! My mouth dropped open at all the exciting places that Dragoman visits, and I was just beginning to salivate when OG insisted I got off the bus immediately. She was being very bossy so thinking something really serious was up I followed like a lamb. Maybe she had seen a sleepy tarantula crawl out from underneath a seat… or even worse….

“What’s the matter,” I said, “I thought it all sounded rather good, shopping and cooking local fare, camping each night, a 300 gallon tank of water, first aid kit, only 22 people and being able to go to places where others fear to tread….. It sounds brill,” and with that she cut me off.

“Dont be ridiculous,” said OG, ” You can’t cook, you know you’re lost without an M & S around the corner, we will be keel hauled if YOU cook.” “And  anyway,” she added, “the average age is 45 years younger than us, they will all be shacking up and I will be left with You!”

Resolving to do something about my cooking, I looked around to see what else was on offer… It was really busy, but most of the visitors seemed like seasoned travellers, some even dressed in shorts, which seemed a little OTT especially as it was sleeting outside, and very few youngsters so it’s true what they say about the grey pound!

Tibetan salesmen clad in national dress stood outside their yurts looking hopeful. Serious walking holidays looked deeply challenging, barge trips in France with dappled trees and no-one in sight but, what about the locks I thought, I bet they squash you in and you probably have to bicycle for miles to get provisions.

Turkey looked inviting, nice beaches and charming looking houses and so did New Zealand …  well, yes it is beautiful and the wine scintillatingly good but it is sooooooooooooo far away, and anyway I’ve been there several times. 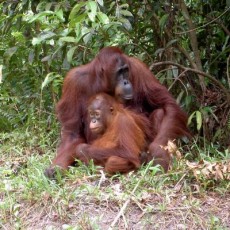 Where was Central America and the Amazon? I spun around and with that my eye alighted on the Borneo Booth and a winsomely pretty picture of an Orangutan and its  baby – Eureka!

I need to explain…In a moment of weakness and exuberance, I have promised to take my 11 year old granddaughter to see the Orangutans if she passes her entrance exams, and the little devil has passed into two schools with flying colours. She is just going through that, ‘I want a pony’, ‘I love animals’, ‘I want to be a vet’ when I grow up stage. I know that the next stage will be BOYS so I’m just trying to squeeze in a few Orangutans before nature takes its course!

I remember very well when my own daughters were getting to that stage. I purchased a pony. What a mistake! 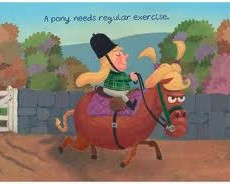 On the very day that I took possession of Toffee, I incurred vet’s fees (Who  ever  named that  pony Toffee was having a laugh.. she was anything but sweet.)

The B***** thing managed to put its foreleg through its hay net and lacerate its leg before I even got it home! The signature on the pet insurance wasn’t even dry. Toffee was a nightmare from beginning to end, she did eat the paddock and save me from mowing, but she also ate the rails, gate trellis and anything else that was within her reach. Soon Toffee had to have a companion, my daughters didn’t like taking turns riding so to stop the rows I got another pony. The new upstart had a habit of eating Toffee’s mane (Honestly I did feed them!)

On one famous occasion when Toffee was competing in the best-dressed pony class, on the day of the competition we realised that Toffee’s mane was threadbare…  Tears from daughter… this was the end of the world, no good me telling her there were people starving in Africa. Fortunately my acting skills came back to me and we managed to make a very passable toupee for Toffee, plaited out of hairs pulled from her tail – extensions for ponies you could say. The judges never knew.

I digress. Enough of horseflesh, there has been much too much of that in the news recently, so back to the Orangutans and my granddaughter.

The Earls Court Travel exhibition has come up trumps, it seems that I will be able to take my granddaughter to Borneo. I have explained to her that it will not be like down-town Beaconsfield.  We will be creeping through the rainforest for many hours and we will have to be very quiet. No iPods, mobile phones or game boys allowed. We will be under canvas a couple of nights, and she will only be able to hear the sounds of the jungle, apart from my snoring that is, and the rest of the time we will be in hotels!  My granddaughter is hugely good company, she has never been on safari or done anything like this so I am very much looking forward to it, and I hope it will be something she will remember for the rest of her life

Her younger sister asked me yesterday where I might be taking her when she is 11. “I don’t know darling,” I said, “where would you like to go?”

“Ancient Greece would be good,” she said, “we have been learning about that at school.”

Ancient Greece? Now that would be a challenge… I wonder if we could go back in time?