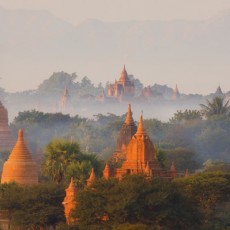 Any expedition in Bagan needs to start at the crack of dawn, before the sun gets too fierce. Stout shoes were needed for our ascent to the top of some of the temples as the steps were very narrow and extremely steep. Some had handrails but most not. OG and I went up slowly, crab like, unlike the kids who ran around the buildings like little cat burglars laughing and trying to hit coca cola bottles with stones and sling shots. The view, in the early morning as the sun was rising, was awesome, a favourite word of my kids but seems to sum up the view admirably. Right at the top, apart from needing oxygen, we had a bird’s eye view of thousands of stupas poking out of the ground for as far as the eye could see, every one seemingly different.

Our trusty coach had, up until this time, been the main form of travel but now we were to travel by horse drawn coach or cart! The driver sits at the 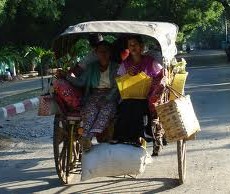 very front and one person sits beside him, then one, or two, if you are not large, sit on a mountain of pillows at the back. This is not the best place to be, as OG found out, as you sway and get bumped up and down; it is also impossible to get in and out elegantly. A further hazard is that the poor horse kicks up huge clouds of dust so you are also constantly coughing as the dust goes down your throat. The locals wear masks of handkerchiefs across their faces, which makes you feel as if you are in the Wild West. I got the giggles as I imagined we were all cowboys and Indians stampeding round the stupas!

Say ‘Bagan’, and temples and stupas come to mind. It was the capital during the first Burmese Empire. It is estimated that there are over four thousand temples in Bagan, though how anyone could count them I cannot imagine. It is unquestionably a major archeological site and mercifully outside aid will protect it.

The government, in the early 90’s, cleared the original settlement and people were asked to relocate to New Bagan. Locals physically cleared the huge moat, which surrounds some of the oldest buildings, with their own spades and sweat. New hotels were built for the wave of expected tourists. A vast government-built, new, archeological museum stands alone and is seldom visited. The educated tourists choose with their feet and it was with our feet that we saw the most intriguing scenes.

I have loved the beauty and lushness of Burma, the generosity of the ordinary people, the every day situations we have found ourselves in.  Orwell and Kipling were similarity inspired, they wrote of languid colonial life but it is not so now. We see a country making its first uncertain steps to catch up… I hope they don’t run too fast.

I urge you, if you are thinking of visiting, go now – you will see something very special. It is pure gold now but it will be alloyed before long. This is not the magic of tourism, it is real!

We walked and walked, we saw temple after temple, our guide seemed to know the history of every one. There were frescos and paintings inside, offerings, gold, gold and more gold… It is 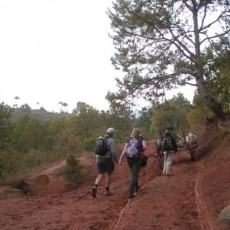 said Burma has more than the Federal Reserves! And we saw puppies, hundreds of them, living among the ruins, tiny ones, only hours old, and scabby pathetic larger ones looking for food. Poor, sad bitches dozens of them with empty teats scavenging to find a morsel to feed their offspring. All the puppies looked the same but where was the father? Siring more puppies no doubt who would all be destined to die! Assignable case for the snip, me thinks!

As we walked around the ruined temples, young girls would try and sell us beautiful lacquer boxes or scarves, “ten dollar or lipstick?”.  That meant if you give them a lipstick, whatever the brand, they would swap for an exquisitely woven shawl or finely painted lacquer box. You can buy some Chinese manufactured make up in Burma but it is very poor quality, and all the girls long for is Rimmel mascara or blood red lipstick.

Our guide tells us we must now be very vigilant and keep our eyes peeled for snakes; he adds that more people die in Burma from snakebites than Cancer or road accidents! Not only that, if you are bitten you will probably die on the way to hospital. I resolved there would be no more peeing in the bushes for me! OG agreed, but then she is lucky as she has a stronger bladder than I.

BPG Tip: do your pelvic exercises girls before you get old.  You will really thank me if ever you travel in Burma!

Back to our walking, the terrain is different, no more huge hills hooray. Half way through what had been the most wonderful of walks, we were miles off the beaten track and had just met an enchantingly pretty little girl who was called Snow White, it became fairly clear we were lost. We had walked all afternoon and had enjoyed and marvelled at the expertise of the farmers.  They seem to be able to grow every vegetable known to man and the farms were so neat.  We had dodged bad tempered oxen, they don’t like the smell of us (meaning westerners), and tend to kick, and we chatted and smiled and waved at every child we came across but I noticed our guide looked rather concerned.

” We are lost, ” said Ni Ni, with his customary huge smile.

We won’t starve I thought to myself, there are enough vegetables growing here to feed a nation.

“We can get back”, said Ni Ni , “but it means going over some bridges”.

“No worries”, we assured him with our usual bravado, “we are game for that”. 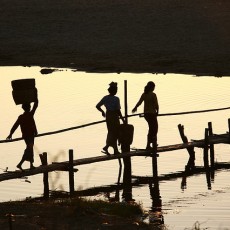 Bridges…… more like one bamboo pole or, if you were lucky, two. I watched Ni Ni leap across, he sort of ran at it with his feet facing outward like a ballet dancer, all, I might add, clad only in a long robe and flip flops.  We looked sceptical, after all he was a good 30 years younger than most of us, and 45 years younger than me!

“You can do it”, he encouraged, with that he leapt into the river up to his chest whilst still fully clothed. He held a walker’s stick up right so we had something to hang on as we wobbled our way across, no one fell in! We were just congratulating ourselves on how well we had done when lo and behold another bridge and so it went on… I think we did five in all.

Tightrope walking is not something I ever done before and that was not the end of it. On the final stretch we had to walk along the railway line…well there was sense in that as at least we would arrive somewhere. I kept looking behind to see if there was a train coming, Ni Ni noticed and laughed, “Don’t worry about the train, only one a week!!”

Then the final hurdle… A railway bridge… Not quite the size of the Gokteik viaduct but big enough. No chance of Ni Ni nipping into the water this time as the river was miles below and there was no handrail. They don’t expect people to walk over railway bridges, especially with very uneven slats with wide gaps.

As I have said before OG doesn’t like heights!

“Shall I walk on front of you, behind you or with you? ” I said to OG, and, as an afterthought, I added “and for God’s sake don’t look down!”

She roared with laughter and replied, “Don’t be daft if I don’t look down I’m sure to fall in”.

With that I stepped forward and she followed and, in Neil Armstrong’s immortal words, “One giant leap for mankind…”

We both attacked the Pinot noir that night.

Next stop HeHo and the beautiful Lake Inle.