Marbella, the land of pouting lips and permanent tans. Huge boobs can magically reduce and big boobs inflate! In fact it seems you can make almost any part of your anatomy either bigger by pushing something in to it or smaller by freezing it off. How things have changed since I lived in the Costa del Sol twenty years ago! 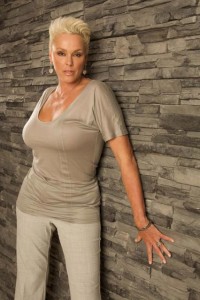 As I people-watched at a glitzy opening party of a bar in Puerto Banus last Tuesday , I have to say I have never seen so many over sixty year olds (you can tell by the hands) with goldfish mouths, perky tits and and Brigitte Nielsen hairdos. No offence to Miss Nielsen – her hair is fabulous and it suits her well but she is over six foot, very slim… and very pretty. However I saw many portly sixty year olds with lips so glossed you would slip off them and hairstyles so waxed they look as if they have just joined a boyband. The last accoutrement every woman seems to have – which proves that they are all barking mad – is a very small dog peeking out from a very large designer handbag!

Why am I back in Southern Spain? You might well ask. Especially as I’m off to India in another week. Actually Spain isn’t really my usual sort of destination, however, a very long time time ago when my children were in their teens, I had an apartment in Southern Spain. At that time the Costa del Sol was rather exciting and racy. And a teensy weeny bit – dare I say – seedy. Of course it had Sotogrande which is very grand indeed with the famous Valderrama Golf Course and, in the summer, it is the playground for the smart Madridellanos. There were certainly plenty of motor boats and good looking polo players, but there was the other bit – the not so fashionable bit. That was where I lived. Duquesa and Estapona were more affordable than San Pedro, Puerto Banus or Marbella.

In the eighties the Brits suddenly realised that they could play golf for half the price than the UK and that the sun shone all through the summer. Better than that, you could buy a villa for well under a hundred thousand. It all seemed a very good idea at the time. The building trade had never been more prolific. True, the food wasn’t very sophisticated but the booze was cheap and the whitewashed villas with bright pink bougainvillea were very enticing. Add to that some pretty colourful characters – train robbers, smugglers, counterfeiters and show biz types and you could be sure of an entertaining summer. My neighbour got detained by Her Majesty for five years and he was a lovely fella. The tall and fair Dutch and Swedes also caught on – and we all lived happily together.

My children loved coming back year after year. First they brought school friends and after that their university friends. We had a thunderous Sunseeker monster which ate petrol and with this boat came a tiny studio flat on the harbour. I shall never forget my son in his first year at university had eight friends staying in it; one of whom, his girlfriend (now wife and mother of their three children) decided that the fug was so awful she would sleep in the lift. She spent the whole night going up and down but it was infinitely more comfortable than the studio! All the kids, now captains of industry and law firm partners etc look back on our Costa days with great affection. It was there most of them lost their virginity, had their first fag and I hate to think what else. But all, I may add, within a good safety net because they didn’t have to drive anywhere. They could walk to all the bars and restaurants. They loved their independence, they cooked for each other and there were masses of swimming and tennis parties and rugby matches on the beach. One boy went on to play for England and now is a famous television presenter! For the first few years I cooked for them and I learned a hundred and one ways of doing mince, the cheapest meat in those days. They had so much of it I live in fear one of them will develop mad cow disease. I just loved watching them enjoy themselves. Romances blossomed and three of the original couples are now happily married and have their own children. 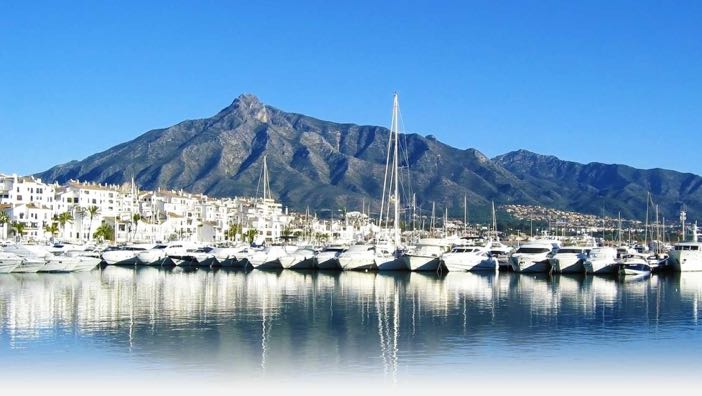 For me this trip is just a short one. I’m helping out an old school friend who lives here and she has just had her bunions done and hence can not drive her car. (There is a new and pretty well pain free operation you can have here). She is living in a very posh house in Marbella with huge garden and swimming pool. But she is a car drive away from everything. So I am here to ferry her around and am endeavouring not to kill her with my driving. I haven’t driven here for ten years. I had forgotton how macho the Spanish drivers are – they do not signal at roundabouts and they all seem to have pressing engagements. They are perfect gentlemen when on their feet I might add or on horseback but get them behind a wheel… Added to that I’m driving a gear shift and I have an automatic in the UK. We have had a few near misses so far.

There is something unique about Marbella. I’ve always loved it, probably cos I’m rather a blingy granny. I went shopping yesterday. Lots of gold on everything – not just clothes but buildings, door handles, lamps, hairdressers basins!  I thought all the gold had gone to China. 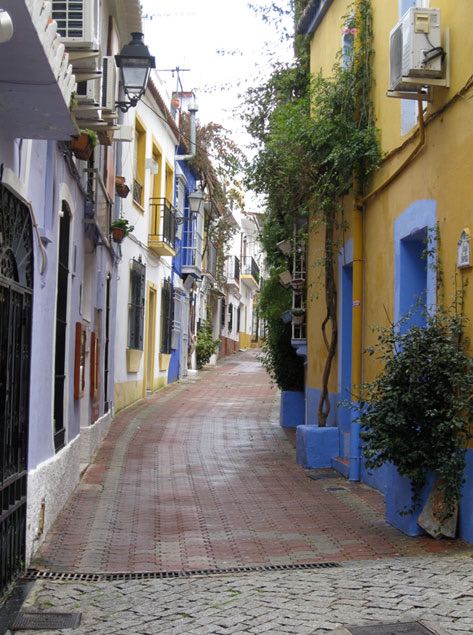 The winding little streets in the old town are charming and mostly pedestrianised. Flowers tumble from every window and the sweet sound of children at play can be heard as you pass the schools. There are numerous cafés and restaurants where you can while away a few hours people watching. It’s October and the climate is heavenly. The food is much much better – these days you can even get unusual herbs in the magnificent supermarkets – we used to bring our own ketchup with us in the old days.

If you are a granny you might be drawn into one of the ridiculously expensive children’s shops. The clothes are just exquisite – I even saw a leopard skin fur all in one for a six month child! Petit bling at its best.

These days Marbella is absolutely international. Much is said about the economy being down but I haven’t seen much evidence of it. The restaurants and nail bars are full. Twenty five euros for a nail paint! Russians, Jews, Arab, English, Swedes, Danes, Portuguese and Chinese all live together in harmony. That says something for the place – why can’t we do that elsewhere?

Gotta go… need to start making lists for my trip to India. I’m off to the eastern side of southern India – a little unusual but I wanted to go somewhere where it is less touristy. I shall be staying in a little hut on the beach for part of the time learning how to fish…