This book, Belles and Whistles was sent to me and, whilst I have not read it cover to cover, I think I can give an honest appraisal – anyway I believe it is 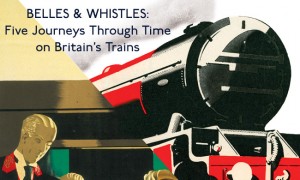 more of a dip in sort of book!

I think we all admit that travelling on a train nowadays is a means to an end, a need to get to somewhere as fast as possible, rather than the more romantic trip that it used to be when there were steam trains. However I do love train journeys when I can sit and read and watch the countryside hurtle past my window, and my favourite train journey was when my children were small and we often took the Cornish Riviera to Cornwall travelling within a stone’s throw of the water at the infamous Dawlish (remember the floods last December), crossing the River Tamar at Plymouth via the suspension bridge which all added up to our most enjoyable train ride.

The author, Andrew Martin, is the son of a railwayman and practically ‘grew up on a train’ and he takes us on five journeys, happily one of them is The Cornish Riviera Express, searching for the ‘named trains’ that symbolise the Golden Age. He sets off on each of their modern equivalents and tries to recreate the journeys of the past however the opulence and extravagance of railway travel has long past (sadly).

As I previously wrote I am a train user but not a train buff or even a train lover in the true sense of the phrase. So I was not sure what to make of this book but I soon became engrossed in the Great Britain of 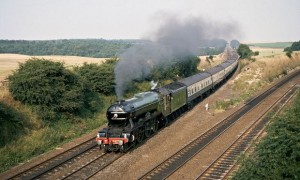 ages past – it is a nostalgic book, in a way, when trains had names, The Brighton Belle (for late risers as only ran after 11am), The Golden Arrow (London Victoria – Paris Nord via land and sea taking 6.5 hours), The Flying Scotsman (non-stop King’s Cross to Edinburgh), The Cornish Riviera Express (London Paddington to Penzance), and The Caledonian Sleeper (Euston to Glasgow via Watford, Rugby, Crewe, Preston and Carlisle).

I loved Andrew Martin’s humour particularly in the last chapter when he applies it to Richard Branson and his Virgin trains. There clearly is no love by the author of the gadgets and gizmos, the lack of space and the walls of plastic that he had to sit next to on occasion, in the modern equivalents. The coloured images reproduced in this book portray visually to a bygone past and it is obvious that Andrew Martin is passionate about his subject. However it is ore than just a book about the trains, it is also about the people who built them and those who have worked or travelled on them giving an insight into Britain’s social history through the railways.

If you have someone in your family interested in trains then this is a must-buy present however the book has a much wider appeal in that I think we all get to an age where we appreciate and miss much of the ways of the past so you don’t have to be a ‘train-spotter’ to enjoy and appreciate this book.