Blue is the warmest colour / CountryWives 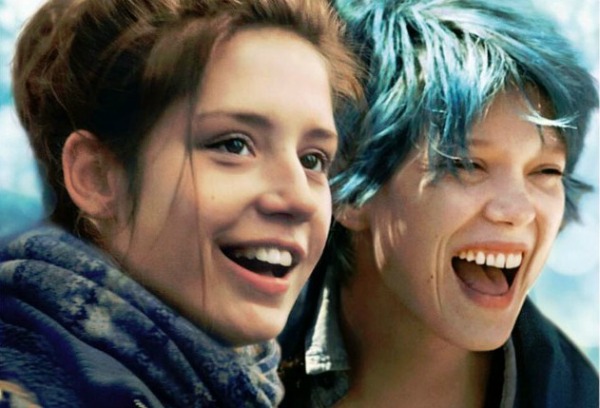 This is the story of Adèle and Emma, the differences in social class and the exploration of freedom and love. Director Abdellatif Kechiche and, for the first time ever, both leading actresses, won the 2013 Palm d’Or for this (almost three hour long) film.

Husband and I watched it on DVD on rainy Sunday afternoon. I had heard this film had had brilliant reviews and was keen to see it. It is a captivating film, charting Adele’s exploration of life but it had its drawbacks too.

The sex scenes were rather boring – if that’s lesbian sex I don’t think I’ll bother as it seems very prolonged and somewhat athletic. Of course, unlike moi, they both have perfect bodies and, rather spookily, they are almost clones apart from their faces. Apparently they used false genitalia, although not sure why they bothered as every other square inch of their bodies were on show in the overly long sex scenes. From what I read, the lesbian community wasn’t too impressed with the way the two straight actresses played out the lesbian lovemaking.

But hey, enough about the gratuitous sex. This is a dramatic love story which runs through the gamut of emotions from first glance to tearful, snot running out of nose farewell. If it was good enough for Steven Spielberg and the rest of his Cannes jury (which included such eminent film makers as Ang Lee, Nicole Kidman and Daniel Auteil, then it must be worth watching.