As was once famously said by Mark Twain, “Truth is stranger than fiction, but it is because fiction is obliged to stick to possibilities; truth isn’t.”  The Bolter by Frances Osborne is a good example of this quote as alcohol, cocaine, promiscuity, nympho­mania, wife swapping, divorce and profligate spending are rife in this book. It is the true story of Lady Idina Sackville born in 1893, an English aristocrat and member of the Happy Valley set. Her behaviour and lifestyle scandalised middle class society and that was 100 years ago, however even now some of it would be considered quite wild!

I have often described books as ‘page turners’ however in every case they have been works of fiction. This book written by Frances Osborne, Idina’s great granddaughter, is the first biography that I have ever read that I would classify as such. It was hard to put down and there were chapters where I was shocked by the behaviour of this seemingly upper class group that it made me feel like a real boring middle-class wife! She married and divorced 5 times and died when she was 62 years of age. She was called The Bolter however she was more of a Boltee (if there was such a word) since in most cases her husbands left her. She did not confine her liaisons to her husbands and there were a fair few lovers along the way. 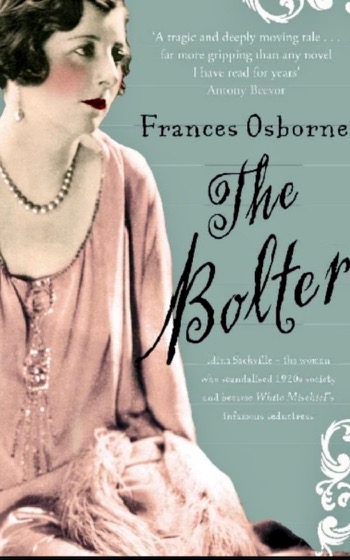 Sackville abandoned her rich, charming, handsome (and philandering, but everyone was) husband, Captain Euan Wallace, and her two sons, ages 4 and 3, to live on a farm in British East Africa. This era of her life was made into a film, White Mischief, dramatising the events surrounding the murder of Lady Idina’s third husband Josslyn Hay, 22nd Earl of Errol.

This was life after World War I, when husbands and entire families of sons were obliterated on French battlefields, Sackville’s set was desperate for fun, injecting morphine, attending “bottle parties” and downing vats of White Ladies, whiskey sours and Bronxes. By 1921, “nudity was all the rage.” Women were dancing on tables, wearing transparent dresses. One hostess greeted her guests “wearing nothing but a famous string of family pearls which reached her pubic hair.”

This is a very sad story of a legendary woman, and an unnerving portrait of upper-crust London and colonial Africa in the early 20th century. Prepare to be shocked but equally to be educated and entertained. An absolutely fabulous read.