My bosom buddy is back in the fold. BackPacking Granny is back and boy have I missed her! We spent Christmas together in Spain but then in early Jan she flew off again to reconnect with family in Oz, leaving the rest of us to endure cold dark damp greyness for months without her. I was so pleased to see her I ran into the local deli where we were to have brunch “like a whirling dervish” apparently (what IS a whirling dervish? And why do they whirl?). A lengthy brunch ensued with much hearty laughing, then a night at the theatre – well technically am-dram in a local village hall but it was huge fun. Followed by a long chatty dog walk and then cooked dinner for more of us to have a BPG catch up – but it still wasn’t long enough to hear about three months worth of news!

The first thing she seizes on is the fact I have had s*x! Yes, quite an event and despite her being on the other side of the world, she was the first person I told. I think she was so amazed she actually called me back to make sure she had correctly understood my not very cryptic message. There is a guy I met on a dating sight well over a year ago. He is really lovely and we get on incredibly well but he is still hung up on his ex girlfriend. He is having counselling and I have held him at distance but we have met fairly regularly for coffee, walks, drinks and dinner. Anyway he invited me to his home where he cooked me dinner – which was actually very good – then we did the cliched movie and bottle of wine thing. Before I knew it, we were getting a bit amorous on the sofa!

When we next met for lunch something was obviously playing on his mind. Turns out, in his macho manly opinion he didn’t feel he had given me his best performance! I screeched with laughter and told him “Darling I haven’t had sex in 3 years – you could have been bloody awful and I wouldn’t have cared!  I just enjoyed the chance to get naked and get jiggy!” Suffice to say he has asked for the opportunity to “redeem” himself – I am so looking forward to doing it all over again! 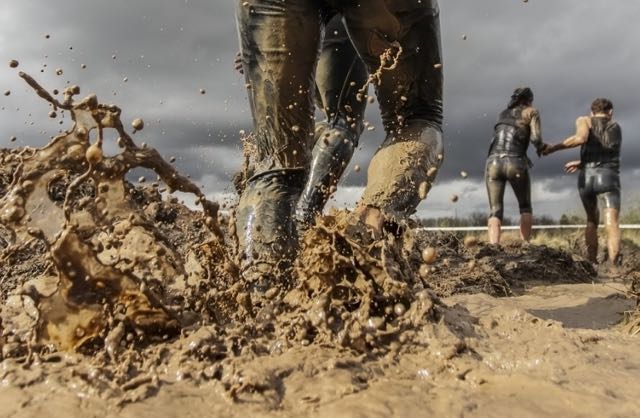 Obviously recounting all this to BPG gave rise to even more merriment. She was trying to work out if this made me and my delightful chum “Friends with benefits” which  sent us into another fit of the giggles. She then asked about the introduction agency, Farrow & Bane, that I recently joined. I told her she was thinking of Farrow and Ball and they may be great if I was looking to hook up with a decorator!(More mirth.) Seriously though, I have had two dates via the agency so far. The first went fairly pleasantly but he was quite arrogant which I wasn’t impressed by. The second date was fine – took us a while to get going, but once we had established common ground we chatted like we’d known each other years. We have both agreed we will meet again, but after I have embarked on a 6 week gruelling schedule to get me ready for Tough Mudder. I have been chatting on the phone with a third prospect who seems pleasant enough. However when I showed his details to BPG she thought he had a “mean mouth”! And another profile from the agency pinged into my inbox this very morning.  It’s looking promising all round in fact.  I certainly have a spring in my step and a twinkle in my eye!