The nights at the The Hill Station were challenging to say the least but you cannot travel and enjoy Burma with all it’s foibles without being flexible. The presence of sheets and towels spread over every piece of topiary bush or hedge in this grand looking hotel was most unusual since the hotel was certainly not blessed with any hot water which probably accounted for the Brand X colour tone of the laundry! We were ushered to our room with deep reverence, you might have thought we were going to the Presidential Suite at The George V; there was much showing of facilities of which there were none, no hot water, no fridge, no view, no safe BUT there WERE 3 single beds. The beds were damp and adorned with extraordinary purple, orange and black furry Chinese monster blankets and I had the most appalling nightmares every night I slept under them; OG said it was due to my vast consumption of the local Pinot Noir but I’m convinced it was the blankets. I also saw a mouse or was it a rat, but didn’t dare mention it to OG or she might have put it down, once again, to the Pinot (she drinks less than me!)!

OG and I decided NOT to use the laundry service, I didn’t really fancy my 36 DDD being displayed on the Agapanthus for all to see; we did however have an awfully good walk, yet again we hired a local guide and set off suitably attired for once! Our new best friends the “sophisticated walkers” had lent us sticks which was most generous and they helped enormously; we were told to take our torches too. Oh! Were they not expecting us back until nightfall?? Wow, this was going to be a long walk…….

We set off in strapping style, scrambling up the pine clad hills, we walked for about two hours and I was jolly pleased that I had packed in some Chiltern Hills walking practice as, dare I say it, some of the others were puffing but not OG of course, she takes everything in her stride and only complains if we keep stopping and starting as the metal in her hip doesn’t like it! 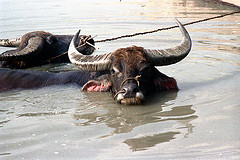 Finally, having climbed up and over a considerable hill, we came out onto open land; the most beautiful patchwork of colour lay before us, mostly hues of yellow and amber with touches of luscious pale green, this was one of those moments you never forget, a “Golden Moment”. Far in the distance we could just distinguish the water buffalos working and wallowing and women squatting in the fields as they weeded, slowly working their way across the fields like lines of locusts. As we got closer the patchwork became a reality, we were actually walking in the fields; the water buffalos smiled broadly at us, they have the sweetest faces and the softest velvety noses; what a lovely way to spend the afternoon I thought…

We stumbled on trying to keep our balance on the narrow mud walls surrounding each field; every so often someone would shout “Hole!” or ” Hazard!” and we would look down with even more vigilance, ooops, all of a sudden OG was flat on her back, she had dropped down into a carrot field, fortunately her well filled rucksack took most of the impact! OG is such a sport, she got up, climbed onto the wall again despite her metal knee and walked on, the carrots however looked deflated, dejected and well sat upon.

As luck would have it we came upon a collective of farmers threshing; they had been at it all morning and were about to have their lunch, we watched as they threw corn in the air and beat at it wildly letting the huscs fall to the ground. The stooks were gathered and then placed impossibly high on a bullock cart ready to be taken to the village. Children were playing, babies lay in baskets in the shade and the men and women shared the arduous work. Charmingly and with great generosity we were asked to partake of their meal which was especially kind as we were a party of 12 and hadn’t done any threshing at all!! We declined politely “Ta-Ta!” we called out to the friendly threshers, which means bye-bye in Burmese, perhaps a Burmese nanny said it to a British child in her care all those years ago and somehow it stuck and become part of our vocabulary?

Ni Ni, our guide, has advised us very well as far as eating is concerned, he has chosen for us at every juncture “It would not have been good to eat their food” he said to me conspiratorially and I agreed with him; no one has yet been ill under his guidance. I have in the past eaten such delicacies as sea slugs, dogs testicles and spider’s legs; I can’t say I enjoyed them very much but at the time I just had to swallow and think of England. Thank God for Ni Ni’s guidance!

I must explain that there are no proper roads here, we walk on well worn paths which the villagers have used for years, some are less worn than others and the farmers walk very long distances to their fields everyday…..and so did we! Our stamina was improving and we all adored our privileged time being welcomed into the “country folks” lives, that was until we got ourselves well and truly lost but I’ll tell you about that at another time!

We were much gladdened by the news that we would be staying in a “Beautiful new modern hotel ” on the banks of the Irrawaddy before we set off on our boat trip down this great water way……”Yippee!” we thought; our faithful coach met with us once again and miraculously got us back to Mandalay without overheating.

There is a very famous teak bridge “The U- bein-bridge” which is consistently featured in magazines and often photographed in silhouette with Bhuddist monks crossing it. The bridge is 3,900 feet long and supported by over a thousand posts, it has NO handrails and has gaps between the slats; the touristy thing to do is to walk over the bridge in the afternoon and get a boat back from the other side while watching the sun set. I am sad to say this was the only point in my entire trip that I felt we had become tourists; the boats jostled madly for the best position and I spent an uncomfortable time wishing I could get back to shore to get away from what seemed like the whole of Europe trying to take photographs.

The hotel was indeed on the the banks of this world famous waterway; we were told not to go out at night because there were “bad people” about, I’m not quite sure exactly what that meant but we followed our orders and had a wonderful meal at the open restaurant on the top of the building. The hundred and sixty five degree view of the Irrawaddy was utterly breathtaking.

My breath was also taken away when I reached my room after dinner to find, no, not more Chinese blankets, but a waterfall pouring straight from the air conditioning unit into my suitcase. I had laughingly said, when choosing clothes for my trip that I would only choose muddy colours so they wouldn’t show the dirt but I hadn’t planned on everything being soaked! The tickets, visas, passports had to be dried with an ancient hair dryer and needless to say my clothes stayed damp!

We were up and packed early the next morning, I watched in trepidation as our suitcases and rucksacks were literally hurled from the bankside on to the boat, soon we were off. We had an eight hour trip to Bagan ahead of us and I of course, with my love of puns, thought we should have started our trip there; I would have loved to have begun my blog with ” It all began in Bagan!”. There we were sitting on the top of the boat upon cane chairs with the most wonderful view; the river is pale blue and the banks of the river are lined with white beaches, during monsoon season the river is three times wider so it covers the trees and even the little encampments we saw as we sailed past. Villagers move from the fertile land of the riverside and rebuild their houses further back every year, imagine moving and building your house every nine months!

OG and I slathered on suntan oil and baked on top of the boat for seven hours straight; we consumed pints of water and ate our lunch from the little packed lunch boxes supplied by the hotel, sadly there were no hawkers on the boat as I would far rather have eaten my lunch from a palm leaf than polystyrene. We watched other boats sail up the river piled high with water pots and fishermen patiently waiting for that one fish for supper, what is it about men and fishing? We saw oxen released from their traces having a quick dip to cool off, whole herds of Brahmin cattle (they are the white ones with humps on their backs and lovely brown eye make up!) rehydrating themselves. Women were doing the washing and children were splashing around in the shallow waters. All the while there were the beautiful Stupas and golden Pagoda spires to admire, dominating the landscape proudly……..what a beautiful country this is, the pace is comfortable and I loved our languid cruise down this great waterway.

At last we arrived at our new hotel, The Thazin Garden Hotel, heaven! A huge pool glistening in nightlight, set in a magnificent garden filled with stupas and a trellis of deepest mauve and pink bougainvillea surrounding the pool. OG and I wallowed like water buffalos in the glorious pool water, sipping on our G and Ts…… cool at last! Our room was lovely, it had an outside stoop with two planter chairs and inside everything was made of cane.

There is nothing unusual about tissue boxes, laundry baskets and fruit bowls but I didn’t expect to find an entire bathroom cabinet made out of cane as well as the hangers, the slippers and the little handbag like water carriers. If I hadn’t been such an honest BPG I would have squeezed them all into my rucksack; the workmanship was so charming. We had dinner under the stars, sitting amongst the stupas and bougainvillea trees. All we could hear was the sound of crickets, frogs and the crunch of the screw top bottle of the very good local Pinot Noir which I had now grown so accustomed to. I have a theory that if you drink a modicum, or in my case a wee bit more than a modicum, of alcohol it will save you from getting tummy upsets; well that’s my theory and I’m sticking to it!

More about Bagan next time, the 41sq kilometres of stupas some dating back to the thirteenth century, the hundred and one puppies living and getting lost amongst the ruins, the tightrope walking, the travelling by horse drawn cart, meeting a beautiful little Burmese girl called Snow White and of course the incredible Kalaw railway!

PODCAST: You’re Never Too Old To Have Good Sex