I was surprised to find out that this summer wasn’t officially the hottest on record, and that it tied with 1976, 2003 and 2006. But the summer dust has literally not had time to settle in my house before I get a call asking for a recommendation for some “proper winter sun”. My suggestions of Southern Europe are brushed aside with: “This year it has to be the real thing – after the summer we’ve just had I think I’m ready for the Caribbean!” There are so many Caribbean holidays which look and sound so enticing that it was very difficult to put a short-list together, but Hotel Guru knows exactly where to visit…

St Kitts and Nevis are only separated by a narrow channel, but they’re quite different. St Kitts is large, laid back and mountainous, with a few bustling centres, and a very Caribbean feel, while tiny Nevis has a colonial air, with historic plantation houses and small, pretty towns. Both have beautiful beaches, even by Caribbean standards, and behind the bougainvillea, hibiscus and palm trees is lush, tropical jungle in which you might even spot a hummingbird.

Where to Stay? The Nisbet Plantation Inn is on a 36 acre coconut plantation, which hugs a stretch of beautiful, white sandy coastline on charming Nevis. There are 36 rooms and suites, all with private balconies and painted in muted pastels. There’s also a spa, tennis courts, a lively bar and a fabulous restaurant. Rooms start from $284 per night including breakfast.

Practical Details: To get to Nevis you need to fly into the Robert L. Bradshaw International Airport on St Kitts, then transfer to Nevis by sea. There are a limited number of direct flights from the UK – they run ex-Gatwick two days a week. The best time for visiting St Kitts and Nevis is between mid-December and April, or you can take advantage of the cheap deals on offer during the summer months, which are traditionally part of the hurricane season.

Jamaica in January looks every inch the perfect Caribbean paradise. It has, arguably, some of the world’s best beaches with fine, white sand, the interior boasts shades of verdant green, whilst the Caribbean sea surrounding the island is a bright aqua and the resorts are known for being luxurious. It’s also known for, producing some of the world’s best coffee. But culturally Jamaica is quite different from its neighbours; it’s still laid back, but it’s also intensely proud of its African heritage and history as the hub of the slave trade. Today it has become a real cultural melting pot, and home of Rastafarianism and reggae. The interior is ripe for exploring, if you can tear yourself away from the beach, and the jungles hide charming settlements, exotic creatures and idyllic waterfalls. 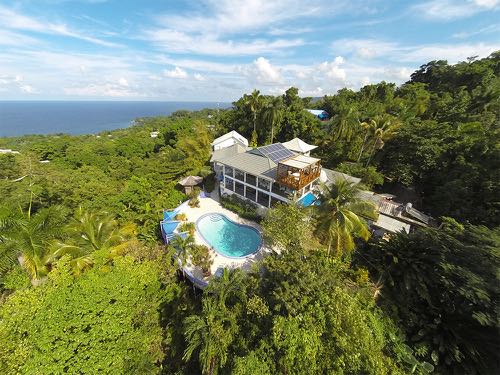 Where to Stay? Mockingbird Hill is an elegant, ten room, eco-friendly hideaway perched on a hill just outside Port Antonio, surrounded by seven acres of lush, tropical garden and the added benefit of one of the island’s best restaurant. Doubles start from $246 per night B&B.

Practical Details: Jamaica has two major international airports: Sangster at Montego Bay and Norman Manley in Kingston. At the moment most flights to both Montego Bay and Kingston leave from Gatwick. Or you could arrive by ship? The peak season is between January and March, though it’s also popular during spring break in the US. Hurricane season runs from June to November.

The string of islands making up Turks and Caicos includes forty individual islands and coral cays – a joining of two families of islands, as the name suggests, with Grand Turk and Providenciales the respective capitals. The beaches are beautiful, the scuba diving and deep sea fishing are excellent, and the best places to stay in the Turks and Caicos Islands tend to be the luxurious, private island retreats, or maybe one of Grand Turk’s charming colonial guesthouses. 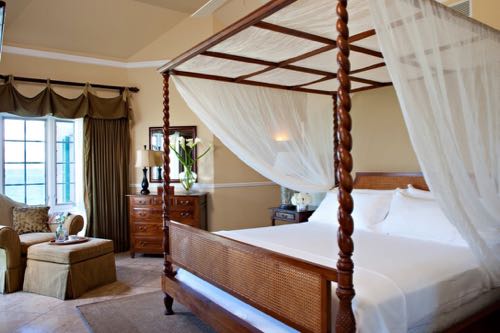 Where to Stay? Point Grace is a dreamy resort perfect for a romantic beach-side break. The 28 rooms and suites are stunning, and each has a private balcony. There’s also a Thalasso spa, two restaurants, huge pool, and direct beach access. Rooms start from around $630 per night B&B – it’s expensive but worth it!

Practical Details: BA flies to Providenciales (via Antigua), or you can fly to Miami and change there. From Providenciales you can transfer to seven other island airports. Hurricane season on the Turks and Caicos runs between July and September, aside from that the weather is a fairly static string of temperatures in the high 20s, so the best time of year to visit is probably between October and April.

It might surprise you, but the Dominican Republic is big. To give you an idea it’s about twice the size of Wales. And it covers around two thirds of the large island of Hispaniola, sharing with Haiti to the west. So if you’re looking for an opportunity to really explore a place then this is the Caribbean destination for you. Of course the beaches are gorgeous too….The Dominican Republic was one of the first places in the Caribbean to be settled by Europeans and has some of the oldest colonial buildings in the Americas. It has the feel of Latin America in the vibrant cities, the elegant colonial era towns and the tiny hillside villages hidden in the jungle or on palm-fringed shores. 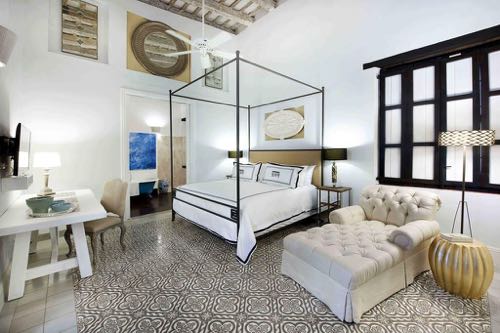 Where to Stay? Casas del XVI is a beautifully renovated collection of houses in the elegant, colonial heart of Santo Domingo. There are just seven bedrooms, with contemporary decor, carved wooden furniture and Dominican artefacts, plus several relaxed public spaces, including a tropical garden and courtyard with palm trees, spraying ferns and pool. There’s no restaurant but there are some excellent dining choices nearby. Rooms start from around $285 per night.

Practical Details: The Dominican Republic offers you a choice of airports, with BA and Thomas Cook flying into Punta Cana and Thomson Airways flying to Puerto Plata. The northern hemisphere’s winter is the most popular time to visit the Dominican Republic – and between January and March you’ve the chance to see humpback whales migrating off the north-east coast. The summer holidays are popular too, with plenty of resort, all-inclusive, or great value packaged holidays on offer to the Dominican Republic (but beware this is also hurricane and tropical storm season).

St Lucia is a great beauty, with lush green jungles, tall peaks and plenty of West Indian charm. Add to that perfect bays, private coves and bright blue seas and you have one of the world’s most idyllic tropical islands. The kind of island paradise place you might have imagined spending your honeymoon? Though you might want to remember that the beaches to the island’s north are mostly golden and the ones to the south mostly silvery.

St Lucia is a wonderful place for divers and snorkellers, but it also offers a bit in the way of adventure too, in the shape of the two Pitons: Gros Piton and Petit Piton. For most people climbing Gros Piton is an achievable goal. But you might also be tempted by the drive-in volcano, or the sulphur springs.

Where to Stay? Boucan by Hotel Chocolate is a small, stylish hotel in a perfect, chocolatey location: a lush, green 140 acre cocoa plantation – St. Lucia’s oldest. The hotel has 14 wood-clad lodges, beautifully camouflaged in their jungle-y surroundings, and decorated with dark wood furniture – including modern four-poster beds. Outside there are gardens, a spa and a beautiful infinity pool. There’s also a great bar and a restaurant with a coco-based menu. Rooms start from around $447 per night.

Practical Details: Hewanorra International Airport (UVF) offers direct connections to Gatwick, with a flight time of about nine hours. The airport is around an hour and a half from Castries, the capital city, and taxis aren’t metered, so you do need to think about pre-booking a shuttle or something similar beforehand.

The peak season for visiting St Lucia is between about mid-December and April, as everyone tries to escape the chill of a northern winter. This is when it’s finest in St Lucia, which does make a difference, as this island gets more rain than its less mountainous neighbours and it can be quite wet and sticky during the summer and autumn months. Hurricane season officially runs between June and November, but September and October are the months St Lucia is most likely to experience major storms.

Many more holiday ideas from Hotel Guru can be found here