Land of Plenty by Charlie Pye-Smith – A Journey through the Fields & Foods of Modern Britain.

When I was handed this book, Land of Plenty by Charlie Pye-Smith, to review my heart sank. Was I really interested in reading a book about the land and agriculture? Well I was riveted from start to finish. I have learnt so much. Farming has changed from being a prosperous way of life to being one of extreme hard work and struggle. 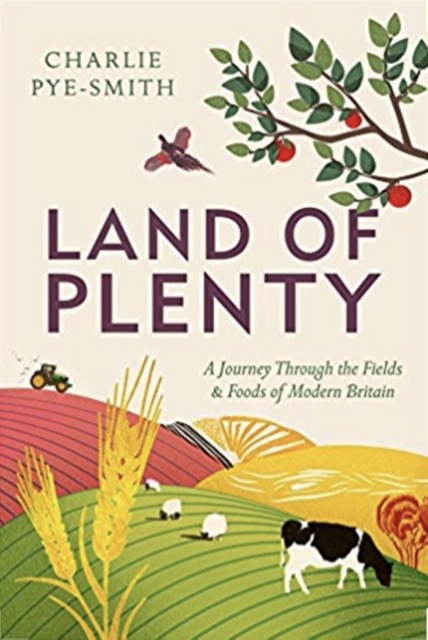 Farmers feel that people do not understand even the simplest things about farming. But Charlie Pye-Smith believes we are not as ignorant as we think. We just use different terms these days, such as conservation, nature writing and rural travelogue. You just have to look at the viewing figures of Countryfile, the Sunday night programme on BBC One, to see the fascination we have with the countryside.

In order to research this book Charlie travelled around the country in a motor home. He started in the Spring of one year and finished the following Spring. He visited large estates, hill farms, and fruit and vegetable farms. He looked at the pros and cons of indoor and outdoor animal keeping. These chapters challenged me.

Large subsidies from the EU have certainly contributed to the changes in the way the land has been farmed in the past few decades. The EU demanded the increase in dairy products. Farmers invested in dairy herds but this led to the butter mountain. There are other examples of similar over production. As a result, farmers sold their herds and took up arable farming and produced quantities of rape and wheat. This led to the soil being sapped of all its minerals and it becoming far less fertile. So now Farmers are returning to the old system of rotation mixed with the return of animals and the use of their manure.

The question of Brexit is an interesting one. I had presumed they would be against Brexit but most said they thought it would be a good thing and would focus many farmers to work harder and be more efficient. Having said that the British Government has promised to pay them public money for quite a few years to come. Tenant farmers sadly are on the decline. This is due to the unfair taxation systems. It seems that once more it is the large landowners who benefit the most.

Another positive is that the National Trust is encouraging a few farmers to trial an incentive scheme. They have been asked to set aside some land and return it back to an area encouraging wildlife such as butterflies and bees to return. They will be paid on results.

Charlie Pye-Smith is a broadcaster and writer on rural affairs. He has written a number of books on rural life. He has certainly enlightened me to farming especially animal husbandry and welfare. So much so that my shopping took me double the time as I read the labels checking that it was British, free range and how and where it was farmed. My eyes have certainly been opened by this book, Land of Plenty by Charlie Pye-Smith, and I recommend it highly.

For more book reviews from The Page Turner click HERE.