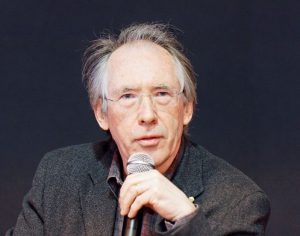 When my friend K came to see me the other day she pressed a paperback into my hand saying she thought I might like to read it. As it was a very thin paperback with only 213 pages and large type, I thanked her and took it.

I never read. I like books, don’t get me wrong, but I rarely seem to find an hour or so spare in which I can lose myself in the pages of a novel. I am not a pick up and put down type – I find it hard to concentrate. But this book – The Children Act by Ian McEwan (pictured right) – was an easy read. In fact, I managed it in two sittings – no doubt in great part due to the skill of the author. It also was a storyline that I found fascinating, not least because the main character is a woman aged sixty.

Fiona Maye is a High Court judge presiding over cases in family court. She is fiercely intelligent, well respected, and deeply immersed in the nuances of her particular field of law. Fiona is expert in considering the sensitivities of culture and religion when handing down her verdicts. But one ordinary day she comes home and her husband, Jack, asks her to consider an open marriage and, after an argument, moves out of their house. His departure leaves her adrift – was it love she had lost or her respectability? She throws herself into her work, in particular, a complex case involving a seventeen-year-old boy whose parents will not permit a lifesaving blood transfusion because it conflicts with their beliefs as Jehovah’s Witnesses. What happens between Fiona and the boy has momentous consequences for them both.