I found this recipe for Chilled Asparagus soup in the Daily Telegraph and the chef is Stephen Harris who is the chef-patron at The Sportsman in Seasalter, Kent (best restaurant and best gastro-pub at the National Restaurant Awards 2016). I served this Asparagus soup as a lunch-party starter – the flavour is very subtle and it got a lot of praise. 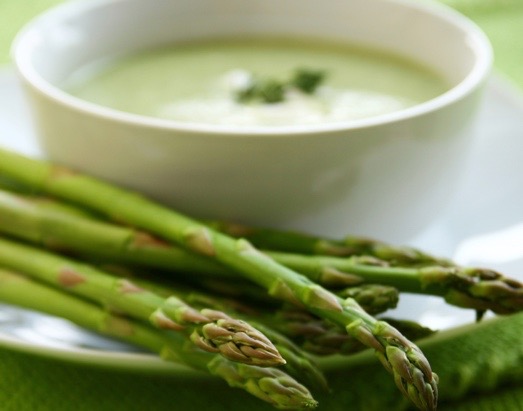 Aprrox 1kg asparagus stalks (just the middle bits between the tip and the woody root – you will need 1.8kg of whole stalks in total)

Slice the asparagus widthways very thinly (the thinner you slice them the quicker they will cook thus keeping the colour.)

Heat a large saucepan then add the oil. Throw in the asparagus trimmings and cook rapidly but without allowing them to brown – keep them moving. Add a couple of pinches of salt. Within a couple of minutes the asparagus will soften and go bright green.

Meanwhile bring the milk to the boil and then pour enough over the asparagus to just cover the veg. Cook for two minutes then check that the asparagus is soft enough to purée – press a piece between your fingers; it should give.

Put the cooked stalks in a blender and blitz until smooth, adding the cooking milk a little at a time to ensure the texture is right, like a thick purée.

Stir in the crème fraîche and pass the soup through a sieve. Adjust thickness if necessary with some more milk if too thick.

Now chill the soup as quickly as you can, to keep the colour as bright as possible – I put it in a large dish on a couple of ice blocks in the fridge.