Classic Colombia. Home To 10% Of The Amazon Rainforest - Annabel & Grace

For forever I thought of Colombia as too dangerous to research properly for my travel bucket list, but, largely unnoticed by me I’m sorry to say, that has been changing over the last decade. To the extent that one of my less-adventurous friends, has started talking about visiting! She’s having a significant birthday and wants to do something totally different, and, having watched a particularly enticing documentary on the Amazon, she’s set her sights right there. Colombia is home to ten percent of the Amazon Rainforest, and the least visited ten percent too, so suddenly she’s popped it right up there in the centre of my radar. And Columbia looks incredible! What an amazingly rich travel research project I have been missing out on! 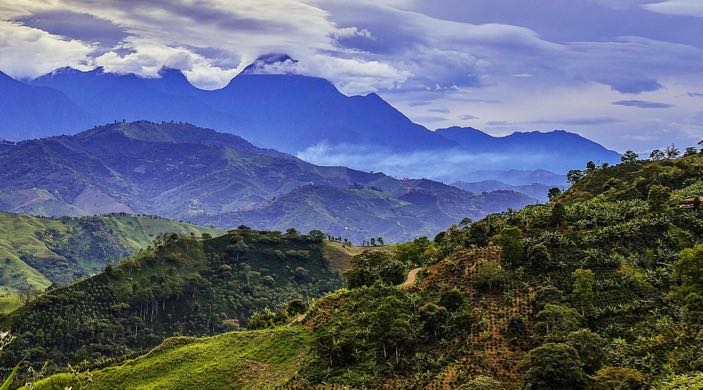 Colombia has a diversity of landscape, climate and cultures which should make it one of the world’s most popular travel destinations. The jungles – including swathes of the Amazon – rival the rawness of the world’s least explored, and hide ancient temples and astounding ruins. Colombia’s cities offer both the grace of their colonial heritage and the vibrancy of modern South America, rivalling the region’s most colourful and culturally varied. The mountains are high – perfect for both trekkers and skiers – the emerald hills lush, and the beaches wouldn’t seem out of place in a Caribbean travel brochure. Not forgetting the whale watching, diving and surfing opportunities just off the coast. Basically Colombia is paradise.

Here’s what my friend and I have been getting pretty enthused about, with hotel recommendations, and some direction on precise locations, from those helpful Hotel Gurus.

For the Beautiful Caribbean Coastline

Colombia’s coastline is tropical – you’re almost bang on the equator – and things are more languid and happen at their own pace. It’s also long and extremely varied, with something on offer for watersports-folk, adventurous souls, and those of us who just want to relax somewhere beautiful, sunny and reviving. And there’s plenty inbetween too.

Where to Stay? Get right up against the white-sand-fringed Caribbean Sea, by staying in the secluded, six room Gitana del Mar, in the sleepy coastal town of Buritaca, just north of the Tayrona National Park. This is the place for you if you’re looking for pristine beaches and photo-perfect scenery – care of the tall mountains which surround the town. These bamboo bungalows are simple, yet refined in their design, the restaurant is creative and they offer morning yoga classes. Double rooms start from around £210 per night, full board.

Practical Details: Buritaca is on the northernmost coast of Colombia, close to the Tayrona National Park. The closest airport is in Santa Marta, and you can fly there direct from Heathrow. From Santa Marta Airport you can arrange a transfer, or else catch an airport shuttle, then bus to the entrance to the National Park, and from there you’ll need a taxi. Alternatively you could fly in to Valledupar or Riohacha and catch a taxi, or fly to Cartagena or Barranquilla and catch a bus. Buritaca is hot all year round, but sometimes it’s hot and dry and sometimes hot and humid – with October being the wettest month, and December through April the driest. And when I say hot I mean 30°C+ every day!

Right up against a perfect Caribbean coastline, Cartagena has a fantastic history of wealth and piracy, and its heavy fortifications and extraordinarily preserved old colonial Spanish city are one of the reasons this is one of the most fantastic places in Colombia to visit. I’m by no means the first to say it, but it’s like something from a fairy tale, with its maze of cobbled alleys dripping in bright bougainvillea, and graceful colonial houses and impressive churches. And the heat and humidity just add to its feeling of sensuality and history. 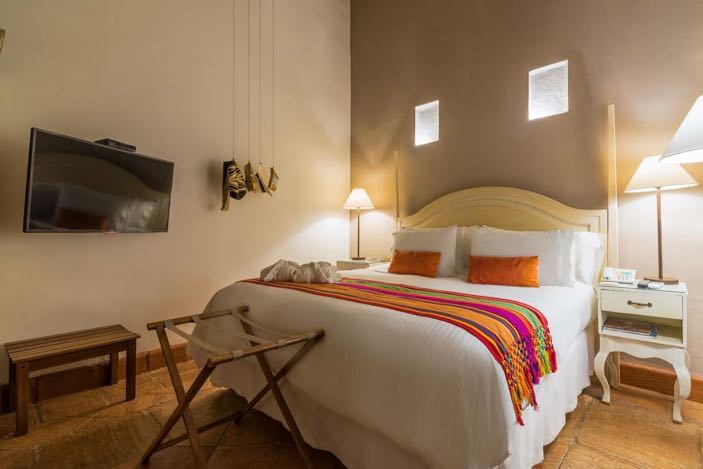 Where to Stay? The Bantu Boutique Hotel is an elegant five star hotel converted from a charming, 18th century building. There are 26 characterful rooms, decorated with traditional mosaics and exposed bricks – plus the bathrooms are marble. Outside there’s a beautiful roof terrace with swimming pool, a courtyard lush with plants, a solarium and a hot tub. There’s also a Caribbean/ Colombian restaurant… and it’s quite romantic. Doubles start from around £155 per night.

Practical Details: Rafael Nunez International Airport is only about 10kms out of town, and is connected directly to a few UK airports. Like Buritaca, Cartagena is probably best visited in the dry season between December and March.

Colombia for The Wild

Colombia’s position straddling the equator is responsible for the incredible diversity in landscape you can see within one country here. As well as experiencing the pleasure of a Caribbean beach, you can raft the Amazon River in Colombia, ski dramatic snow-capped peaks and visit the tranquil, high altitude lakes of the Andes, before you head back downwards for the lush, coffee-growing emerald hills and the strange tropical grasslands, and hit the sea again and some incredible offshore reefs.

There are lots of adventures to be had here, and most of them are based around a few hubs, and I quite fancy the look of Tobia. It’s close to Bogota, but still looks remote, traditional and eerily beautiful, and there’s some incredible canoeing and rafting on the Rio Negro, and some tamer options on the Rio Tobia, which is just next door. Or you could visit Colombia’s Amazon.

Where to Stay? The Casa de la Estacion is a really beautiful six room B&B in a stunning, riverside spot just outside Tobia in the Rio Negro Canyon Forest. The rooms are spacious, and simply, but chicly, decorated, and, as well as the restaurant, there’s a pool and a private cinema. And you can see the beautiful surrounding area on one of their complimentary guest bikes. Rooms start from under £100 per night B&B.

Practical Details: Quebradanegra is where to head for for the Casa de la Estacion, and the easiest route is probably via Bogota, though it’s the final stretch from the airport that’s going to be the challenge whichever airport you arrive via. If you don’t hire a car, catch a taxi or arrange a transfer, it’s going to be a bus journey of at least three hours followed by a taxi ride – but if you’re looking for remote, then it’s going to be difficult to get to…

For ‘Off the Beaten Track’ Colombia

Colombia is a great place for explorers. There are plenty of relatively unexplored areas, and relatively unvisited towns and villages, so if you’re looking to go somewhere under most travellers’ radars – including mine! – then Colombia has a lot to offer you. Here are just a couple of towns I like the look of, but there are plenty along the same lines. I like the sound of Valledupar’s colonial centre, scenic position, cowboy reputation and its history, and I like the sound of Nobsa’s proximity to Colombia’s wine regions and its reputation for handicrafts – especially weaving and furniture production. Both of these centres seem to promise a Colombia relatively unchanged by international influence.

Where to Stay? Valledupar’s Casa Rosalia is tranquil and leafy, yet in a fantastically central spot in the middle of lively Valledupar. There are just five chic, whitewashed rooms, with exposed beams and plenty of light – some even have hammocks strung up, which is perfect if you’re travelling with your family. There’s also a really beautiful outdoor pool. Doubles start from a very reasonable £67 per night including breakfast.

Practical Details: Valledupar’s Airport is called Alfonso López Pumarejo Airport, and is conveniently located about five minutes drive from the centre of town. If you can’t find a suitable flight then there are several other local airports worth considering, including Barranquilla, Santa Marta and Cartagena. Valledupar is also probably best visited between December and March. Temperatures are hot all year round, but there’s less rain during these months and it’s less humid. 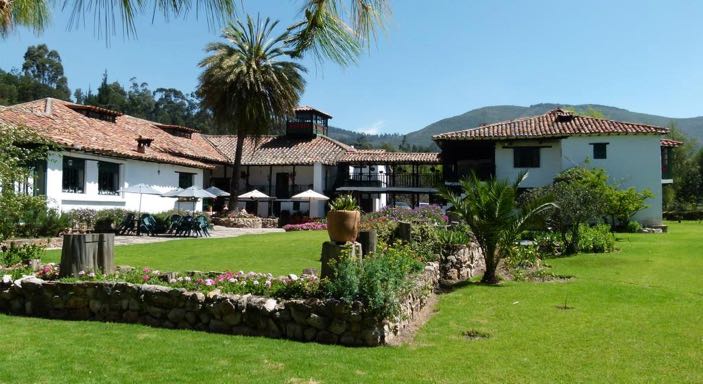 Where to Stay? The Hosteria San Luis de Uguenca is a smartly presented 12 room boutique-style hotel in historic Nobsa, which is around 125kms north of Bogota. The décor is traditional, featuring dark wood antiques and beamed ceilings, and there’s an atmospheric restaurant serving regional fare. The gardens and courtyards are lush and relaxing. Double rooms start from around £50 per night B&B.

Practical Details: Fly into Bogota, then you’ve a choice of travelling the last three or four hours by bus, taxi or hire car. Nobsa’s high altitude means an escape from the heat, with daily temperatures around 25C°, but you should also expect rain, and quite a bit of it. December and January tend to be the least rainy, but it comes with ‘the territory’ in this part of the country.