How to have a happy commuter train / CountryWives

I was on the Piccadilly line, travelling back from playing with my oldest unmarried grandchild. It was early evening. Our tube driver appeared to be an expansive, effusive, jovial chap and was amusing himself and us with his observations on each ‘pit stop’ over his tannoy.

“We are now coming into ‘PC’, Piccadilly Circus. Next stop will be ‘GP’, Green Park.”

I looked around at my fellow commuters to see if anyone else seemed to have picked up on the announcement being a trifle odd and may even have ventured towards unconventional. This ‘not sticking to the rule book’ is something that I fully approve of and anyone roaming ‘off piste’ has my immediate vote.

No-one seemed to have noticed anything untoward.

“We will be stopping briefly at ‘HP sauce’. Dr Jekyll and Hyde Park Corner.”

Ahh, now you have everyone’s attention. Heads jerked up and eyes were searching for confirmation that they hadn’t dreamt it. Yes, I confirm we are in the hands of an eccentric Englishman. That or someone hadn’t taken their ‘meds’ this evening. I assumed that he must have a CCTV camera in his driver’s cabin to watch the paying public’s reaction and assess the audience’s mood, otherwise he’s just talking to himself, and that’s bonkers.

The lady next door turned and stared at me in amazement. I was laughing at her confusion. “Yes, we seem to have a joker at the helm.” I reassured her. The whole carriage was giggling. What on earth would he say next?

“Next stop ‘K’. K is for Knightsbridge.” We all were disappointed. We expected more……..

“BP/Buckingham Palace is nearby, if you are interested? We have lots of palaces. That’s the best one though!”

“Knights in White Satin,” crooned our guy. “Never reaching the end.” Gosh, he can sing quite well too! That caught the remaining tourists’ attention. He now had a full bag! Marvellous! Two ladies who looked as if they would be getting off, decided to stay on for the ride and the comedian with his loudspeaker. 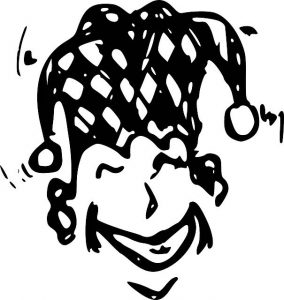 The next stop was to be South Kensington. The carriage was silently anticipating our rogue driver’s description of this venue. “South Kensington … Embassies galore and copious hospitals coming up on my left. You might be interested in the new edition of our free paper The Metro. It will inform you about ALL our line closures this weekend! Practically every line is up the creek without a paddle!”

I had the feeling that maybe our driver was on his way out of a job. He was having his last ‘Hurrah’. He probably wished he’d done it earlier. All that wasted silent air space when he could have been entertaining his fellow man?

“Dr Foster went to Gloucester, in a shower of rain … Gloucester Road! Please take all your accoutrements with you.”

Some woman was shushing her friend to stop laughing so she didn’t miss a single word being relayed over the loudspeaker. Everybody was rooted to their seats. Nobody wanted to leave in case they missed more pearls of wisdom. What on earth would he come up with next?

Sadly, I had to get off at this point but I was sorely tempted to stay on just to hear him summarise ‘Earl’s Court’ and ‘Barons Court’ in his unique, concise way.

I suggest that London Underground should demand this convivial approach from all their staff. The fact that most people wouldn’t ‘get it’ is beside the point. We had one happy train of commuters. Bravo!