Copenhagen: perfect for a mini-break / CountryWives

This last weekend OH and I, together with two good friends, went on a mini-break to Copenhagen, a first visit to this city for all of us.

Now Copenhagen may be known as one of the most bicycle-friendly capitals in the world and so it is. However you must remember, when getting out of your taxi or off the bus, that there is another lane between you and the pavement and that is the bicycle lane. This is a much used lane by most of the inhabitants of the city and one where, if you are not careful, you are likely to get mown down, often by bicycles pushing carts laden with children. It is this bicycle lane that, for us, seemed to inspire much of the mood of the city – no helmets or lycra, just upright bicycles being ridden at a sensible speed. The Danish are a very friendly and laid back race, reputedly the happiest race, willing and wanting you to enjoy their city. If they saw us studying a map they stopped to help guide and recommend, if we asked a bus driver where to get off then a Danish passenger would take over the role of telling us where our stop was. 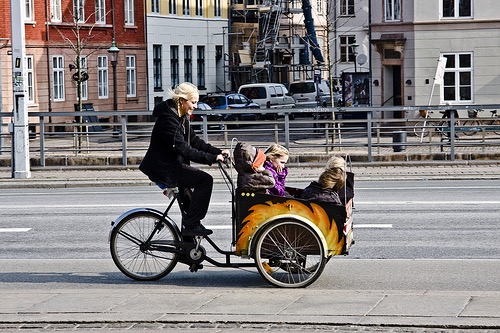 However let’s start at the beginning of our discovery of this beautiful city. We wanted to spend two nights and three full days in Copenhagen and the flights from Heathrow accommodated us perfectly. We found a fabulous hotel, Hotel Guldsmeden Bertrams, through the Hotel Guru website. It was described on their site as,

“Further from the city centre yet still within reach by foot or bus (outside the door) this is the intimate younger sister of the Guldsmeden Carlton, featuring similarly fresh, attractive bedrooms, many with balconies overlooking the garden, and the same organic breakfast in a delightful open plan kitchen/café where a buffet dinner is also served, plus a shop selling culinary treats.”

The breakfast was absolutely delicious which was a perfect send off for our days of discovering this fun and vibrant city. I particularly loved their method of making tea, using your own individual tea bag filled with the tea leaves of your choice and held together with a little bamboo stick which is then balanced across the top of the mug. So Hygge!! However no toaster but maybe that is because they feel there is no need as their bread is fresh and so delicious. Anyway we took the time spent at breakfast to leaf through our invaluable guide book, The 500 Hidden Secrets of Copenhagen, a must buy if you really want to find the hip and cool spots. Click HERE to buy.

When we arrived on Sunday we headed straight for the canal and took a tourist ride which gave us a good feel of the shape and flavour of the city. Lunch was at the Royal Smushi Cafe – a happy confusion of design, with a sense of humour and trend combined with aesthetic, authentic and traditional food in a new way.

“It all began back in the 15th century, or maybe before. A little girl from Amager went to the market where she sold open-faced sandwiches based on rye bread and called it ‘smørrebrød’. The king came by on his horse, looked at her, and said: “Since you are a virgin, you are allowed to be an independent business woman and sell smørrebrød, and your title will be ‘smørrebrødsjomfru’ (open-faced sandwich virgin). The king picked up the idea of smørrebrød, took it to the castle, and spread it all over the country. And this is a true legend. From that day on, smørrebrød became what rice is to the Japanese. But as the world kept changing, they changed too, and they turned smørrebrød upside down. They travelled to the other side of the world to get inspiration and found sushi; The way it is built up in layers, beautifully decorated and in small, delicate and tasteful pieces. So they turned smørrebrød into ‘smushi’.”

That evening we took the advice of the hotel receptionist and walked around the corner for a local feast, traditional food cooked superbly though perhaps we should have taken more notice of our neighbours who were sharing one course. I have never seen such large portions!

The next day we decided to take off to the village of Dragør to see the famous bridge which has its own drama series, aptly named The Bridge. No sign of the lead female character Saga, though she is more likely found on the other side of the bridge in her homeland of Sweden. Dragør has many well-preserved historical buildings. The old part of the town is a compact, picturesque maze of alleys with yellow-painted houses, red roofs, and cobblestone streets built in the traditional Danish style. Many of these buildings are hundreds of years old. It is only 12km from the centre of Copenhagen and you cannot quite believe that you are so close and yet in a remote-looking fishing village.With the aid of my CityMapper app and some helpful Danes we made our way back to the centre of Copenhagen on a bus, and went for lunch on Paper Island. The island is home to the grey industrial halls that served as paper storage for the Procurement Association of the Danish Press for many decades, hence the name Paper Island. When they terminated their contract, the halls were left empty – ready to be explored and experimented with. In the small food trucks you can get delicious sustainable street food from all corners of the world – and enjoy it indoors in the raw halls or in the sun overlooking the city’s waterfront.

There is something very Copenhagen-like and also something very foreign about Copenhagen Street Food. There are scents of Korean and Mexican as well as Italian and Danish food from the small colourful food trucks, but the place – the raw halls in the maritime setting – has a distinct Copenhagen feel to it, which also resembles that of Copenhagen’s Meatpacking District. The area has something raw, genuine and authentic.

Time for a walk across the canal and into Nyhavn. Nyhavn was originally a busy commercial port where ships from all over the world would dock. The area was packed with sailors, ladies of pleasure, pubs and alehouses.

Today the beautiful old houses have been renovated and classy restaurants dominate the old port. Nyhavn is filled with people enjoying the relaxed atmosphere by the canal, jazz music and great food.

No. 9, Nyhavn, is the oldest house in the area dating back to 1681. The design of the house has not been altered since that time. Many of the houses lining the quays of Nyhavn have been the homes of prominent artists. The famous Danish fairytale writer, Hans Christian Andersen, used to live in no. 20. This is where he wrote the fairy-tales ‘The Tinderbox’, ‘Little Claus and Big Claus’, and ‘The Princess and the Pea’. He also lived twenty years in no. 67 and two years in no. 18.

For the second evening in Copenhagen we discovered, with the aid of our guide book, Lidkoeb, a cocktail bar which is located in a beautiful three storey building in a courtyard just off Copenhagen’s famous Vesterbrogade (same street as our hotel). The house was built in 1886 by pharmacist HP Madsen, and for more than 100 years, it housed the production facility of Vesterbro Pharmacy. On a late night In 2010 Rasmus Shepherd-Lomborg was walking home, after visiting one of Vesterbro’s many bars and noticed the slightly worn, lonely building waiting to be put to good use. A voice said: Build it, build it and they will come … This was the beginning of two years of bartering, bargaining, planning and renovation, which finally resulted in LIDKOEB. Sadly the top floor, which is a whiskey bar, was closed however it gives us a good excuse to return. We all enjoyed a couple of cocktails in the unique ambience of this quirky cocktail bar. I am happy to report there was no sign of a cocktail umbrella in any drink!

Next stop was another recommendation from our guide book: Höst, a totally unique Nordic dining experience.The food was out of this world and so unusual, none of us had ever tasted anything like it. With its carved brick walls and wooden elements, Höst unites the simple and rustic décor with rural cosiness. This restaurant has won three international design prizes. The food should also win awards as it combines traditional cooking with local produce but producing a taste and perception of modern Nordic food. It was the most enjoyable evening both for our palates and for the service from the charming staff. Tip: book ahead online.

On our final day we walked and rode the buses around the city visiting The Round Tower which is the oldest operational observatory in Europe giving us a panoramic and bird’s eye view of the city.

OH had a slight altercation with a line of bikes outside the Tower as he knocked the stand of the first bicycle and a whole line fell like a house of cards. No damage was done and much laughter was had at OH’s expense. 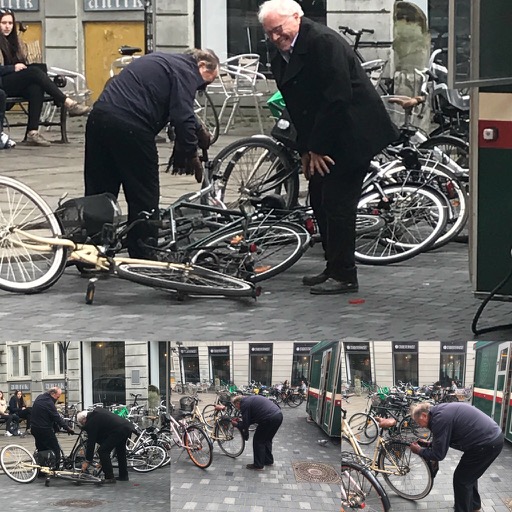 We then walked through the student area with quirky fashion shops with such ultra-cool clothing. We found a Vintage shop full of designer gems from more glamorous times. Finally onto the Meat Packing District – another area devoted to food, more restaurant style than Paper Island but a fun place to come and either cosy up inside or sit outside enjoying the sun with a warmed rug provided by any one of the restaurants. We wanted to eat at Kul, an international celebration of all things grilled, however it was closed for lunch. So we went opposite to Mother, a renowned restaurant often with queues around the block for some of their traditional pizza. Also famous for their Sunday brunch.

It was three days packed with good experiences and filled with charming people. We were envious of the Danes chilled city lifestyle but as the Tivoli Gardens were closed we will be back again to continue to find the best kept secrets of Copenhagen.