My Family: Not the sitcom / CountryWives

I saw My Family: Not The Sitcom last year and discover it is back by popular demand. I cannot say I am in the least surprised. David Baddiel’s show was a total delight. Lovingly disrespectful, beautifully crafted, and full of humour and poignancy. I laughed myself silly and I was moved to tears.

This one man show is a celebration of the lives of his late mother and dementia-ridden father. But not simply platitudes, extolling their admirable characters. This is refreshingly honest – it’s a warts and all expose of his parents.

The first half deals largely with his mother Sarah who, until she died a few years ago, was an incredible character. Some of the very funniest moments were down to her exploits – one even had me gasping in shock!  Post interval, he talks mostly about his father whose illness has turned him into a parody of his former self. If you want to get a flavour of how DB describes his father, watch his documentary, The Trouble With Dad, on Channel 4 on Monday 20 February at 9pm.

Side splittingly funny, searingly honest (and I mean that 100% especially when he talks about his mother’s hyperactive sex life), and fabulously loving. 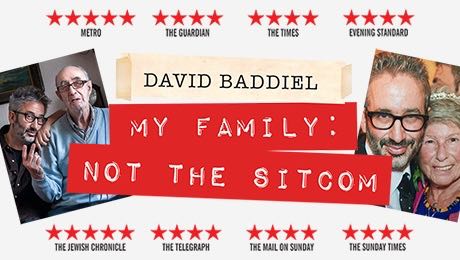 Obviously many country wives live in the country but if you get a chance to train or drive up to London, then I wholeheartedly suggest you do. It’s a riveting two hours of entertainment. Not for the easily offended or children under 16.