Death And Taxes Are The Only Two Certainties In Life

Benjamin Franklin once said, “There are only two things in life that are certain, death and taxes.”

I am not going to talk about taxes but I do want to talk about that taboo subject, death! Nobody that I know has died recently. Nevertheless it became a topic of conversation when we were staying with my brother and sister-in-law.

It all began when OH (my Other Half) and I were staying overnight in Dunster, Somerset, on our way to Devon.  Our visit happened to coincide with the Dunster show, an apparently famous event which attracts crowds from far and wide. We thought we would pay the show a visit even though a man in a local shop told us that he had lived in Dunster for 12 years and had been once which was enough! I think, with hindsight, we should have heeded his advice.

The entrance fee was £12 p.p. It seemed quite expensive for a local show. We were in holiday mood, so we paid and entered.

Now OH and I are open to shopping at stalls as, over the years, we have found many a stall that is selling something that we would like but at a heavily discounted ‘show price’. We call it Al Fresco Sale Shopping and OH and I cannot resist a bargain. We have made mistakes. Dare I mention the smoker which was meant to smoke all of our meat with a subtle flavouring that we never really got to grips with. The first time we used the ‘smoker’ we melted all the paint on its base and the lid. My OH’s eyebrows were singed and the meat was burnt to a cinder. It was due to our inability to control the temperature. This incident has not, however, put us off shopping at a county show.

Methodically we went up and down each aisle at the Dunster show without much success. There seemed a surfeit of waterproof clothing and flat caps. The local mortgage company was doing a big trade which surprised us greatly. There were couples of every age sitting at each of the tables whilst their offspring were being occupied by a thoughtfully provided face painter. It seemed an unlikely venue to organise one’s mortgage but clearly the locals thought it was the thing to do.

Then as we rounded a corner we saw a very busy stand. Encouraged by this enthusiasm we approached to find out what was so popular.

They were selling coffins made out of willow and other bio-degradeable materials. It shook us up quite a bit to be face to face with, potentially, our final resting place. It did not seem to perturb the locals who were trying the coffins out for size and comfort – it was like the bedding department in John Lewis. Orders were being taken with promises that the coffins would be delivered the following week to their houses – I am guessing that this would be in good enough time!! It took our breath away but thankfully only briefly, otherwise we might have had an immediate need for one.

Once in Devon we told the coffin story to my brother, his wife and their other house guests, all of whom were over 50 years. Of course this story became the catalyst for a conversation on what we all wanted as our final resting bed. I mean it is not like choosing paint colours for the sitting-room or even a new mattress. Seriously do we really care how we finally end up?  I mean we are not able to change our mind’s or exchange it for something more spacious.

In all likelihood it will come down to what our family can afford. Burial can be an expensive business if not planned carefully as those in the funeral business are dealing with a very emotive subject. When I was choosing the coffin for my mother I felt bad asking the funeral director how much the coffins cost and could we have something cheaper? Part of you wants to give them the best send off, a teak coffin with brass handles, however on the other hand maybe one should economise on the coffin and spend the money on a really good send-off party.

Death is a subject that none of us wants to face up to and yet, as you get older, I defy anyone not to have thought about it a few times even if in a humorous manner. We all joke with our friends and family to put us out of our misery when we start to fall apart. However this is a conversation that one has when we are healthy and 100% alive. Human instinct is to cling onto life. It is a rare and brave individual who says let me go now. I am not going to discuss the rights and wrongs of Dignitas as that is such a personal choice.

However I thought I would tell you a couple of death stories that came out of this post-dinner conversation.  A few glasses of vino encouraged this chat, as I am sure you can imagine.

One of our friends had recently cremated her brother-in-law. The cremation was to be held in a remote Scottish cemetery.  It was during this last, very cold winter. The coffin had been home-made, designed and made by his wife. The family, with the coffin, arrived at the cemetery after a treacherous two hour drive on icy roads. The man in charge informed the family that their home-made coffin could not be transported into the fire. The coffin did not have rollers on the base so it was immoveable. Meanwhile the funeral directors were apologising profusely for not telling the wife of the deceased about this requirement.

Our friend was despatched to purchase coffin rollers from the nearest hardware store; or something that would work in their place. She said that what had begun as a very sad day ended up with all of the family having a laugh knowing that their brother-in-law would have been looking down chuckling at their DIY inadequacies. 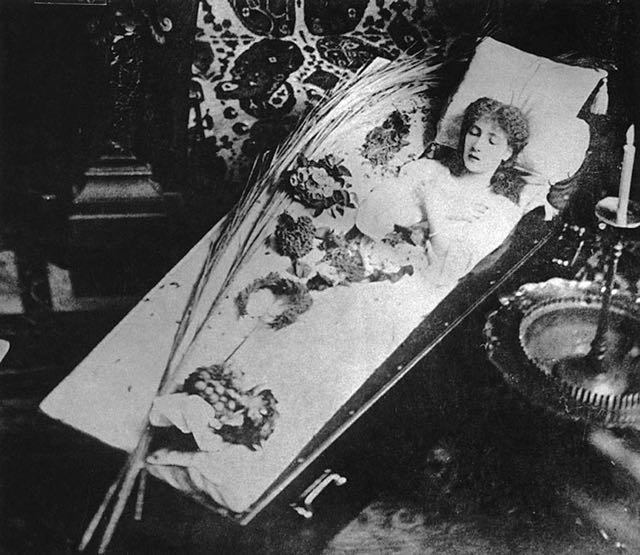 Sarah Bernhardt, the 19th century actress, had a list of alleged lovers which was both long and illustrious. Perhaps her most famous was the Prince of Wales, who later ascended to the throne as King Edward VII. Sarah used to travel everywhere with her own coffin. She slept in this coffin, so it was reported. She said she wanted to make sure it was comfortable as she would be spending some time in it when she fell into her final sleep.

The Victorian era was prime time for taphophobics; those people who are afflicted with a fear of being buried alive. At the time, medical technology had progressed far enough for doctors to realise that they may have been putting people in the ground prematurely. This act was known as vivisepulture. However medicine had not progressed far enough to definitively declare death.

This anxiety-riddled state of affairs is illustrated in this account from 1842. (This document was found in the book, ‘Premature Burial and How it may be Prevented’.)

“A man apparently died, and his death was certified to both by the attending physicians and the medical inspector; he was put into a coffin, and the religious ceremonies were performed in good style. At the end of the funeral service, and as he was about to be buried, he awoke from his trance. The clergy and the undertakers sent in their accounts for the funeral expenses; but he refused to pay them, giving as his reason that he had not ordered them; whereupon he was sued for the money.” 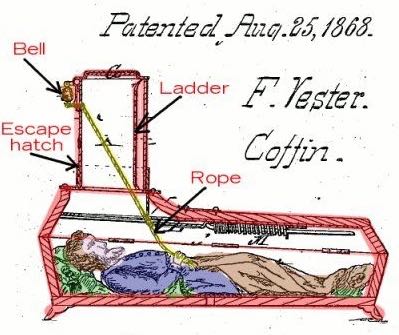 Where does the expression ‘dead ringer’ come from? In 1896 T.M. Montgomery, who was supervising the disinterment of remains at the Fort Randall Cemetery, reported that a little over 2% of those bodies exhumed were definitely victims of being accidentally buried alive. In other words, about 2% woke up, tried to claw their way out, and were unable to do so. Given the oxygen supply in a coffin doesn’t last that long, it is likely the actual percentage of people buried alive was higher; if you include the ones who didn’t wake, but were still technically alive when buried.

The person presumed dead would have a string attached to their finger which was, in turn, attached to a bell above ground. When the person moved, the bell would ring. And that was what you would call a “dead ringer.”

Thank goodness medicine has progressed. A person is now declared dead using something more reliable than the local doctor holding his ear to the chest of the deceased. It is not surprising that mistakes were made. When I eventually go, I hope that everyone will celebrate knowing me and not be sad that I have gone. My grandmother lived until she was 98 years. She used to agree with the saying, ‘Only the good die young’. She was eternally naughty and we all enjoyed our grandmother’s mischief for many years. I hope she is now entertaining everyone wherever she has gone!

As I write this it has been announced that some of Brucie’s (Forsyth) ashes are to be placed under the stage at the London Palladium – the theatre he loved most.

Death scares us and so it has become a taboo subject. It is the unknown that always worries us. We can control or avoid most things in our lives however death is inevitable. Isn’t it time we talked more openly about a subject that affects every single one of us?