Turns out it really is a dog eat dog world / CountryWives

DAY ONE My mobile rang its jolly tune just as I was about to order a much anticipated Rhum Baba from the rather handsome waiter. A stranger was on the other end of the phone telling me my little dog had been seriously injured. The chatter of the busy restaurant faded into the background as the caller, a vet, continued. Jack, our 14 year old Jack Russell, had been given pain relief and was about to into the operating theatre. 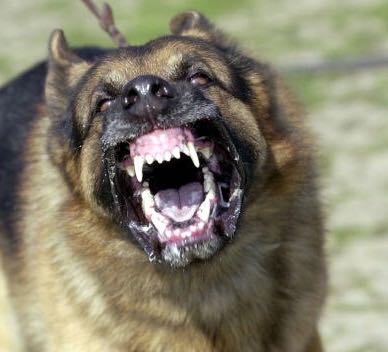 Back on the train to West Sussex, I tried to find out more but, frustratingly, could not get through to the Dog Walker immediately but, when I did, I was shocked to the core. There were five dogs on the walk and they all got along well. However, after 45 minutes, without warning or provocation, the largest dog a Japanese Okita, turned on Jack. Despite Dog Walker’s frantic attempts to get the Okita off my Jack, the vicious attack took at least a minute and she was bitten trying to unclamp the jaws. In shock and horrified at seeing Jack in such agony, she drove to the vet where he was injected with a strong painkiller. Shortly afterwards he had a long operation to repair the extensive damage to his stomach, neck and back. Apparently, he was nearly killed.

DAY TWO The vet allowed me to visit Jack the next day. He advised me to contact the Dog Warden at the local council to report the Okita. But it transpired that our council are only interested if a dog attacks a human. I was told it was a civil matter and that I should contact a solicitor. Jack, although extremely sore and sorry for himself and barely able to move, had good vital signs and the vet thought he would be happier at home. I will only say this – the stress and emotion of looking after much loved but severely injured pet is enormous. He would not eat or drink or pee. He just lay in his basket. 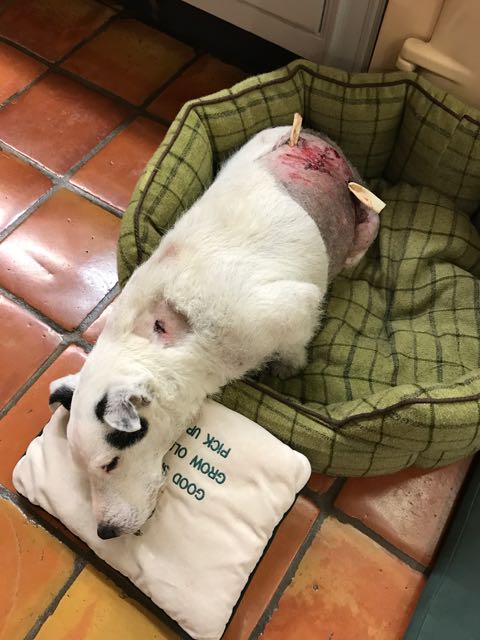 DAY THREE Up at 3.30am to check on Jack. He was sleeping peacefully but no inclination to pee or drink water. Attended second appointment at vets where the rubber drains were removed and he was given four more injections.  Around midday, I managed to hand feed Jack small chunks of freshly cooked chicken breast which Husband had kindly roasted for him.

DAY FOUR Woke up at 4.40am and went downstairs. I have never ever been so delighted to find a poo on the kitchen floor. I just hope it didn’t hurt him to pass it. He walked into the garden and did a pee and then, to my absolute joy, went to the water bowl and had a big long drink. I managed to get his four different pills down him, disguised in hand fed morsels of salmon and jellied meat.

DAY FIVE Jack is progressing slowly but is a little better each day. He is a tough little chap. However, I am getting more and more annoyed. The owner of the Akita has not had the decency to contact me to see how he is. I find this unforgiveable. For all I know, she is walking her dog without a muzzle and it could attack again – next time it might be a human. Dog Walker found out that she has no pet insurance. So on top of the terrible wounding of my gentle innocent dog, the emotional upheaval, and the disruption of our daily life, I now have to pay the vet £3000 (God knows when it will be reimbursed by our pet insurance – less, of course, the excess) and we’ll have higher insurance premiums to look forward to in the future. And the Akita’s owner? She gets off scot free.

Unfortunately it’s not just us who’ve had a stressful week with pets. Marvellous Mother In Law’s Dachshund has (as yet undiagnosed) weeping sores on her muzzle. Two of my friends have had to have their dogs put down. Another found her cat dead on her bed and then mislaid her new rescue kitten on the day the Cats Protection League lady was coming to ‘sign them off’. One has discovered her much adored terrier has a heart problem. Husband did make a wry comment about pet ownership ie was it worth all the trouble. Well of course it is I replied. They only have to look at you with those big limpid eyes and you’re suckered. Long live our pets!

A big thank you to all those lovely people who, having read this post, contacted me to see how Jack is getting on. The answer is that he is making steady progress and has had his stitches out. The vet has signed him off and tells me Jack is ‘incredible’ to have made such a good recovery. G x 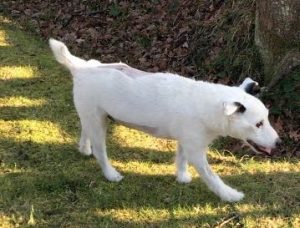