TIMES REVIEW: ‘C. J. Sansom takes a break from his Shardlake series to offer Dominion, an absorbing, thoughtful, spy-politico thriller set in the fog-ridden London of 1952. 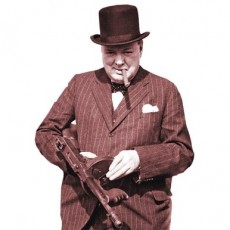 Not, however, the year as it is usually remembered. Sansom has attempted a difficult format — the “what if?” novel. What if, in 1940, Lord Halifax became prime minister instead of Churchill? Britain would have made peace with Hitler, Sansom answers, and by 1952 become a totalitarian state, with Germany, acting as puppet-master rather than invader, setting the scene. Churchill, in hiding, is leader of a resistance movement, to which the hero of Dominion, David Fitzgerald, a civil servant hiding his Jewishness, belongs. Part adventure, part espionage, all encompassed by terrific atmosphere and a well-argued “it might have been”’ Marcel Berlins, The Times

I loved the Shardlake series by C.J. Sansom so I was wary of this new genre but I was not disappointed – a ‘what if’ novel that gets you thinking. It is a spy thriller that keeps you engaged and wanting to know what happens next. All the characters are typically CJS i.e. slightly flawed and therefore very believable.

It is a huge book so I read it on Kindle Paperwhite, a good example of when Kindle comes into its own as this book is far too large to have in your handbag and would therefore have taken me months to read.

Ignore the 3.5 stars on Amazon as this is underrated, in my opinion, and should have been at least 4.5 stars!