Back to the beginning of the tale –

In  2010 the cracks were appearing – (handsome) executive husband (EH) wasn’t happy, in fact he was a miserable bastard – I put all this down to a Mid Life Crisis. His career had plateaued and he didn’t know whether to leave and try to find a new position, or whether he could find fulfilment if his role was changed blah blah blah – I was supportive I looked in the jobs section, we assessed his pension etc etc.

He was dead set against the whole idea of climbing Kilimanjaro from the outset, he told me it was selfish and self-indulgent. This was not helped when, the friend who had suggested the trip, injured herself during training, however I decided to go alone! (well not quite alone as I eventually had 20 new friends, 30 sherpas and a whole host of support crew! But until I got there I didn’t know a soul). I used some money left by my mother to fund my trip of a lifetime – I knew I would have her blessing even if I didn’t have my husband’s.

It was totally amazing, I did have the trip of a lifetime, it was hard going but the sense of achievement was phenomenal. I was the oldest in the group but was given ‘most inspirational member of the team’ award at the end of the trip! Tears all round!!! I came home on an incredible high quite literally feeling as though I had conquered the world!

And then my world fell apart.

The day I came home my husband was kind enough to say how quiet it was at home without me there, that he preferred it that way, oh and, by the way, I don’t think I love you anymore!!  Welcome home!!

Since then we have barely held it together – it wasn’t very long after that when I moved into the spare room as the atmosphere in our bedroom was chilly to say the least. To friends and family nothing had changed – we went to weddings parties and school functions, ever the happy couple, but by the end of 2011 I knew I couldn’t carry on living a lie. It’s amazing how you cover things up for appearances sake.

In January I asked him to leave but he stalled and stalled until I decided if you won’t go then I will and so I did! I am now ensconced in a pretty little flat and I often think of the compete turnaround of my life. Don’t get me wrong, I know, compared to many, my life is still pretty damn good but it’s not what I would have chosen and it’s lonely.

So what does a lonely woman do? Internet dating? Now there’s a minefield! OMG – seriously! Why do people do this????

My age bracket for potential “partners” is 45-55, which I thought fairly realistic? No! Most men in this bracket are looking for women 25 – 35!! Really? Honestly? Don’t kid yourself!

I am regularly winked at, flirted with and “poked” by men who are clearly young enough to be my sons and who are blatantly out for “fun”, read SEX! They obviously believe if you are online you are either desperate or totally up for it! Some much older men approach me who obviously want a nurse or a housemaid and preferably someone who can come with outfits for both roles! Although I was delighted and heartened to see an 82 year old on the site as he looked so spritely and he even had a twinkle in his eye, so I thought good for you.

Honestly some of the pictures?! Rab C Nesbitt or faces off Crimewatch!!! I am no supermodel but I look at these men and think OMG is this what I have left to look forward to? Where is George Clooney when you need him? A word to the wise men on dating sites – don’t have a picture with sunglasses on as you do not look cool, you look stupid and women want to see your eyes. (Note to EH – we got married in the Caribbean and in nearly ALL of our wedding photos he had shades on, it looked like I was marrying into the mob!)

Don’t put lots of topless shots on (this would apply to women as well), I do not want to see your moobs and shots of you topless in bed are quite 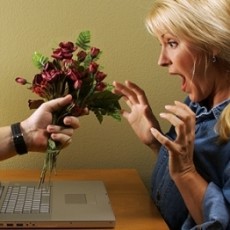 Don’t post pictures where you are clearly next to another woman you are trying to obscure.

I don’t want to see your children – I certainly wouldn’t post any pictures of mine.

I don’t want to see your Porsche, Mercedes, yacht or motorbike.

I don’t want to see your pets (although I was very tempted to reply to a guy last week as his dog looked very cute!) Didn’t fancy the owner though!

Don’t use ridiculous user names especially ones that are borderline rude with words like Knob or pussy! On the subject of Knobs I do not want to see this in anyone’s pictures!

Please don’t post 20 of your best holiday snaps circa 1990’s it is extremely boring.

If you don’t post a picture you are obviously MARRIED!

I am sure that one guy, who has been emailing me, is using a picture cut from a catalogue as if he looked that great he would not be on this site!!

And if anyone else mentions crisp country walks or quiet nights in with a DVD and a bottle of wine ………Aaarrgghhh!!! ENOUGH!

Generally life ticks on, we have good days (usually when the sun is still shining) and bad days when I miss my children (I do see them very regularly every week) and I wonder if I will ever have warm companionship again. I see couples holding hands in the street and it makes me sad… I miss hugs! I have hugs from my children and hugs from my girlfriends but it is not the same as a strong manly hug. It is all a huge adjustment but I keep going and above all else I try to keep smiling.