Celebrating the Emerald Isle / Annabel and Grace at CountryWives

In addition to the tiny men and the stones worth kissing, the Emerald Isle has a magic and a mystery not advertised with quite as much gusto, but felt keenly by anyone who has ever visited. The Irish landscape really is every shade of glorious green, the coastline is in places quite picturesque, and in places extremely dramatic, and there’s really something special about the Irish culture and traditions. There’s history to uncover – both recent and ancient – in even the least likely looking places, and friends to be made everywhere! There’s also plenty to eat, to drink and be musically merry about. So, it’s a great place for a celebration. And this year someone I know well is having a significant birthday worthy of a proper celebration.

I’ve been considering the options for an itinerary. The Ring of Kerry is an oldie but a goodie, just like my special someone. It’s a 179 km round trip past medieval ruins and beautifully beach-y stretches of coastline, up mountains and around lakes, and past incredible Atlantic views. It’s also known for its opportunities for stargazing… Or there’s Connemara – another spectacular Atlantic peninsula riddled with secret bays and coves and wild stretches of wind-whipped coast which will really make you feel alive. Not forgetting the cosy pubs you’ll need to sit in to recover from this feeling of being alive. There’s also quartz-tipped mountains here…

Brú na Bóinne in County Meath is supposed to be incredible as well. It’s an ancient necropolis a thousand years older than Stonehenge. Or the Dingle Peninsula and charming Dingle Town – one of the largest Galetacht regions in Ireland. Or the Burren, where you’ll see the sheer, 200m high Cliffs of Moher. Or the rocky Aran Islands in Galway Bay.

As you can see I’m not doing that well choosing the adventure element. Maybe the city stop will be easier to decide upon? Beautiful, friendly, arty, welcoming, atmospheric Dublin, or Cork, which I have oft heard referred to as ‘The People’s Republic of Cork’, and lauded for its rebellious past and vibrant live music scene? Galway is known for its tides and its summers, which are packed with over fifty festivals a year. Kilarney is the starting point for many trips along the Ring of Kerry. Kilkenny is a medieval beauty with an imposing Norman castle. Sligo has the mountains, the beaches and W.B. Yeats, and Limerick has more graceful architecture and a majestically dilapidated Norman castle.

Ok, so I need to refine my list quite a lot! Or else just convince my significant birthday-er to take about six weeks out of their life to really go on an adventure! I might also need to visit with one of those little men at the bottom of a rainbow to help me out with the cost. This is my shortlist of places we should be staying while enjoying this Irish odyssey. 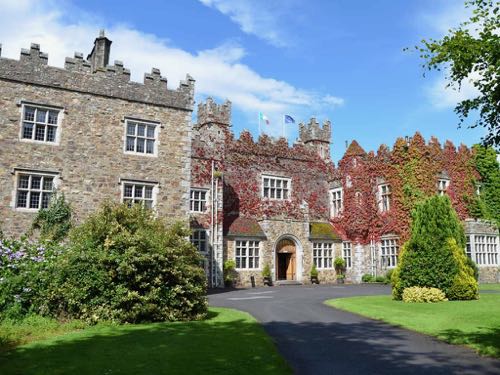 For a Romantic Weekend
Set on its own private island, Waterford Castle is romantic and atmospheric. Built 800 years ago, this Norman castle is awash with heritage and charm. Its 22 rooms are luxurious – some decorated with antiques and some more modern, the restaurant is excellent, and there’s an 18 hole golf course, tennis courts, clay pigeon shooting, and an archery range on site. Double rooms start from £125 per night.
Practical Details: The closest airports to Waterford, which is a ferry from Waterford Castle, are Dublin and Cork.

Where to Stay in Dublin
The Merrion Hotel has been converted from a graceful Georgian, Dublin mansion, and is indisputably one of the most luxurious addresses in town. It’s only ten years old but the decor is timeless and it has the elegant feel of a grand dame. The Michelin star given to the restaurant – which occupies an 18th century wine vault, helps with the overall feeling of timeless quality too, as does the very nice spa and charming garden. Plus, Oscar Wilde once lived a few doors down. There are 142 rooms with doubles starting from around £265 per night.
Practical Details: Dublin Airport is only five miles to the north of the city. Or, if you live in Liverpool, you can catch the ferry over.

Where to Stay for the Ring of Kerry
The Quinlan and Cooke Boutique Townhouse in Cahersiveen, County Kerry is a great base for exploring the Ring of Kerry, on Ireland’s dramatic west coast. It has just four spacious, and individually designed rooms with wooden floors, roll-top baths and Bose sound systems. The restaurant specialises in fish freshly caught from the owner’s boat. Double rooms start from around £105 per night, including breakfast.
Practical Details: The closest airport to the Quinlan and Cooke Boutique Townhouse is Kerry Airport, which is linked to London by Ryanair, but by Aer Lingus to many other destinations, including Dublin. 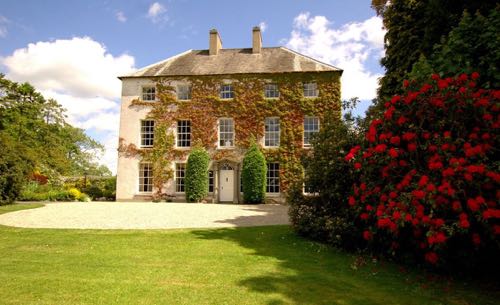 Where to Stay for a Country Escape
Newforge House in County Armagh is a sophisticated, family run country house hotel, converted from a beautiful Georgian mansion by the family who originally built the house. The original Georgian interiors have been updated with all the mod. cons. but they still retain the elegance of their past – plus the six charming guest rooms are decorated with the best of taste and there’s plenty of natural light. The current generation of the family includes an excellent, professional chef. Rooms start from around £130 per night.
Practical Details: Belfast International Airport is the closest airport, and Newforge House is about a half hour drive from there. 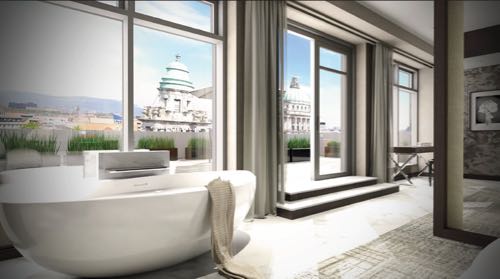 Where to Stay in Belfast
Ten Square is a buzzy, boutique hotel in a Grade I listed building in central Belfast https://www.thehotelguru.com/best-hotels-in/united-kingdom/belfast. There are 22 comfortable rooms, with doubles starting from under £100 per night, B&B. There’s also an excellent steakhouse and hip rooftop bar.
Practical Details: Belfast City Airport is just two miles from the centre of town, or you can travel by train to Great Victoria Street Station, which is right in the heart of town.

DID YOU KNOW?  If, for example, having a hot tub is important to you, you can search Hotel Guru’s hotel recommendations by that, likewise pet-friendly properties, or hotels with a great wine list. Click here to see more of their expert recommendations.