Some people really love the beach, which I understand. But, and don’t hate me for this beach-lovers, I do sometimes think the swell is a bit too aggressive, and the water is just so salty, for swimming, I mean. And, of course, sand is lovely and warm, and mostly soft, and great to dig your feet into… But when the wind gets up it can be pretty ‘whippy’ and stingy, don’t you think? Even if only a tiny part of you agrees with me then it might be worth reading on… about some of Europe’s most idyllic lakes and lakeside hotels, where you can spend all day right by, or in, the water and not come away covered in sand and salt…

As well as being idyllic, these lakes are also some of Europe’s most spectacular spots, surrounded by mountains and lined with extremely pretty ports and towns. And my friends and yours at the Hotel Guru have come up with hotel recommendations where you really don’t have to lose sight of the water for more than the few moments it takes you to go up to your room in the lift.

One of the great pleasures of travelling around Lake Lucerne is the way this long, curling lake offers so many opportunities for you to round a headland and be stunned by an incredible view. Expect glaciated mountains to rise suddenly above you, and dazzlingly pretty resorts to spring from nowhere. Lake Lucerne bursts with life, both when conditions are dramatic and when they’re serene. And there’s loads to do here. Of course you’re close to lovely Lucerne, but there are also peaks to climb, a beautiful coastline to tramp and an ever changing array of piers and promenades to relax with a beverage upon.

Where to Stay?
The Hotel Central am See looks a bit like a giant lakeside townhouse and enjoys an enviable position right on the lake at Weggis. There are 32 rooms, all individually styled, with parquet floors and french doors leading onto private balconies. There’s an elegant restaurant in a conservatory, and a pretty terrace with an infinity pool – right onto the lake. Rooms start from around €171 per night this summer.
Practical Details: There are plenty of ways you can travel between the UK and Weggis, including flying to Zurich or Basel and then getting the train and ferry, or you could take the train all the way, or travel on the Eurotunnel or the ferry. Opting to stay by a lake instead of by the beach often means cooler temperatures. Lake Lucerne is sunny and warm during summer, but even in in July and August, the hottest months, this area’s maximum daily average is 24°C. 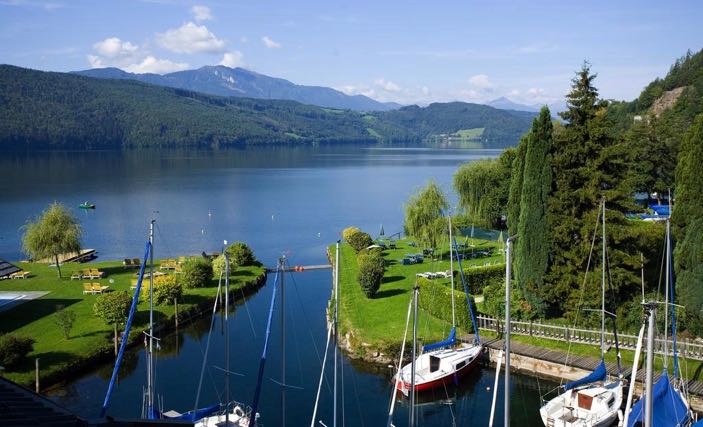 Lake Millstätt is a stunning lake in Carinthia, Austria, with water so clean you can drink it, and a charming story about the origin of the lake’s name. Briefly: the heathen Duke Domitian vowed to convert to Christianity if the Lord would help him to find the body of his son, who had drowned in the lake, and when he did find his son’s body he threw his idol statues, of which there were a thousand, into the lake, and there we have it, ‘mille statue’. The perfect spot for watersports, this area is also great for hikers and mountain bikers, and anyone who wants to treat themselves to warm, clear waters, warm sunshine and good food. 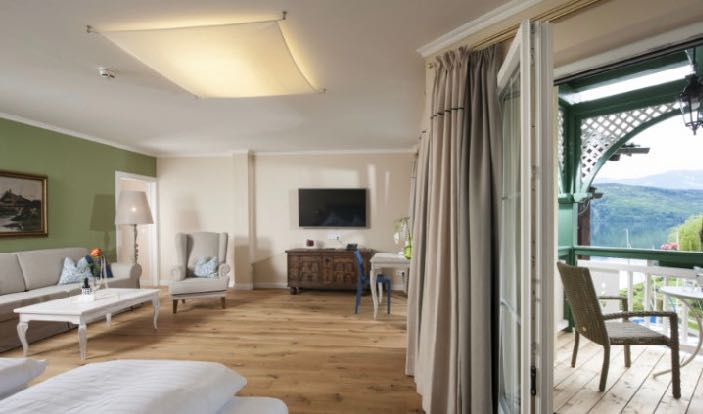 Where to Stay?
Seefischer is right on the shore of Lake Millstätt, a chalet-style hotel retreat with 40 cosy rooms, all with large private balconies. And an excellent spa. Seefischer’s décor is fairly traditional, with neutral colour schemes, parquet floor and the odd exposed beam. There’s also a charming restaurant serving international cuisine to a gourmet standard. Rooms start from around €300 per night B&B.
Practical Details: Seefischer is right on the lake in Dobriach. From the UK you can reach Dobriach via Salzburg, Munich or Ljublijana airports – and it’s a train journey from there. Or you can travel all the way by train. Like Lake Lucerne, you can expect daily maximum temperatures of around 24°C during the hottest months of the summer.

It’s certainly not the most familiar name in European lakes, but Constance is actually the third largest. And it sits neatly between three alpine beauties: Germany, Austria and Switzerland. There’s certainly a charm at being able to wake up in Germany, pop over to Switzerland for lunch on your bike, and fancy sacher torte for pudding, so head over to Austria. And it is really big, and long, and deep. As well as beautiful scenery and a picturesque, sometimes even sandy, shoreline, Lake Constance has ten islands. The largest, and most famous, is probably the island of Reichenau, known for its abbey, but Lindau and Mainau are also both charming places to visit. Lake Constance is known for its winds off the alps, which make for challenging water sports conditions. It’s also one of the few places in the world where you can ride in a Zeppelin, and in winter you can ski… 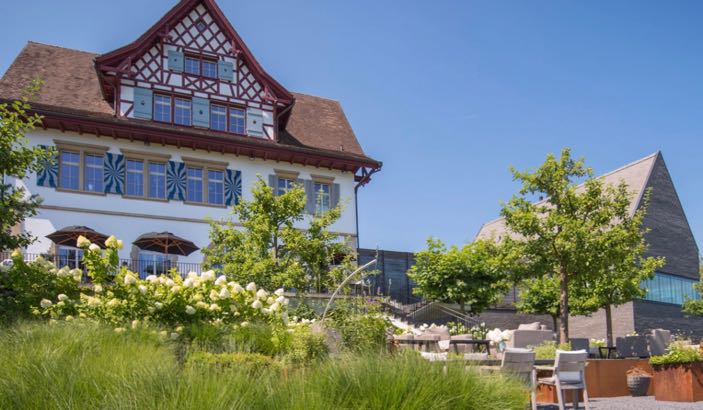 Where to Stay?
The hotel Mammertsberg near picturesque St Gallen, is a fantastic, traditional looking country house with views of the lake and the surrounding countryside. Despite the fantastically traditional facade, Mammertsberg’s interior is totally modern, with just six chic suites and rooms. There’s also an award-winning (it’s Michelin starred), and elegant, restaurant. Rooms start from around €312 per night including breakfast.
Practical Details: The closest airports to St Gallen are Zurich and Basel, both of which you would need to catch an onward train from. If you wanted to travel by train the whole way the best route is via Strasbourg. Lake Constance’s climate is somewhat regulated by the fact that it’s a vast body of water, so despite the sunshine, temperatures during summer don’t often get much higher than 25 or 26°C.

Lovers of these alpine hills and mountains, of Lake Annecy’s peace and stillness, and of this region’s rural charm and strong local identity argue that this is the most beautiful part of France. Certainly Annecy itself, with its little canals, graceful mansions and palaces, and stunning old town, built by the wealthy Dukes of Savoy who had their seat here, should appear on a list of France’s most charming cities. It’s got some great sites to see, but you won’t want to spend too much time indoors, even if you’re just strolling the shoreline or one of the pretty lakeside parks, or taking a spot of something in an outdoor café. For, as well as being known for being very clean (it’s the cleanest in Europe), and pretty (Cezanne painted it in 1896), Lake Annecy is also known for its cuisine, especially its fish, cheese and chocolate. 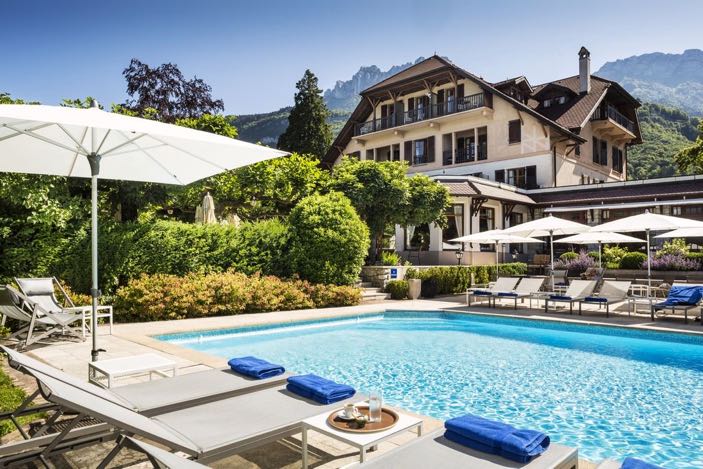 Where to Stay?
Le Cottage Bise is a lakeside oasis, with 35 comfortable, contemporary rooms, a great spa and beautiful lake view – especially from the verandah where you can sit sipping a cocktail. As well as the extensive spa menu, Le Cottage Bise also has a luxurious outdoor pool area. Rooms start from around €234 per night this summer.
Practical Details: Le Cottage Bise is in Talloires, which is closest to Geneva https://www.thehotelguru.com/best-hotels-in/switzerland/geneva or Lyon airports, if you’re flying. Or you can catch the train all the way – it only takes about eight and a half hours from London. As with all our lakeside destinations, Lake Annecy has its summers cooled by its waters, and in the hottest months, July and August, the maximum temperatures around Lake Annecy are 27 and 26°C.

Italy’s lakes Como, Garda and Maggiore are well-known postcard perfect glamour destinations, but who’s heard of Lake Iseo? Surprisingly, the answer is still not that many of us. Lake Iseo is the smallest of the major Lombardy lakes, but no less lovely. And it’s the lake local Italians have preferred, probably because it’s cheaper and less touristy. Its wooded shores have escaped the over-development of some stretches of the larger lakes, so it’s very green. And its three main towns and sprinkling of smaller ones feel very Italian. Ferries cruise all over the lake, heading to and around Monte Isola, the forested island in its centre. Iseo’s colourful towns all front on to the lake; you get the best view of them arriving by boat, so the ferries are one of the best ways to see the sights. Though there’s also a very pretty coastal road. 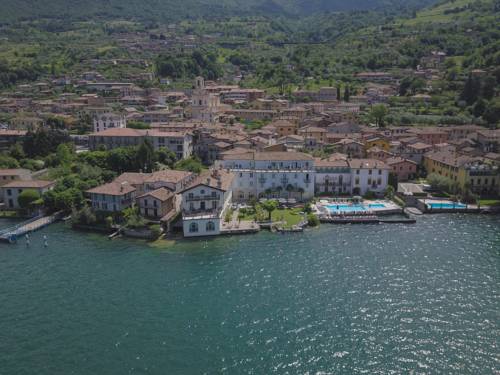 Where to Stay?
The Hotel RivaLago is in a peaceful, and beautiful, lakeside spot, with a private beach and a simple, yet elegant pool terrace. Its 32 rooms are comfortable and airy and decorated in an elegant colour palette, and some have private balconies overlooking the water. Doubles start from around €163 per night B&B.
Practical Details: The Hotel RivaLago is in Sulzano, which is best reached via Milan or Verona if you’re flying – it’s a train onwards from both airports. Alternatively you can travel all the way down by train. Lake Iseo is my warmest lake recommendation, with maximum averages in July and August of 29°C. But there’s still a nice breeze most afternoons.