10 things that get better with age. Yes, life can be fabulous after 50

At A&G, we take positivity seriously. Goodness knows we all need some after the year we’ve all had. Most of us dread getting older but there’s mounting evidence that old age brings happiness, intellect and even better sex. So let’s give ourselves a morale boost by reminding ourselves of all those things that after fabulous after 50…

We are no longer invisible Finally, mature women are becoming far more visible in all areas of life. About time I hear you say. Couldn’t agree more. If you want to expand your horizons, you can. Whether that means setting up a new business aged 65 like Tricia Cusden of Look Fabulous Forever, starting a blog like Hazell Jacobs at 87 or simply deciding to wear clashing colours because you damned well feel like it. Doesn’t have to be earth shattering, just mean something to you.

We are happier and more self confident 65 to 79 is the happiest age group for adults, according to Office for National Statistics research. Younger people have so much more on their mind – raising children, juggling their work/life balance, financial issues and so on. Plus, as we age, negative emotions like sadness, anger and fear become less pronounced and so we’re more able to enjoy the life we’ve made for ourselves. We become more self confident because we are more comfortable with who we are, rather than wishing we had someone else’s life.

Staying healthy Just because we are getting older does not automatically mean that our health is only going to go downhill. Far from it. Healthy eating, gentle exercise and a positive outlook can all help to reduce the risk of chronic disease or injuries as we age. A recent Swedish study found that exercise is the number one contributor to longevity, adding extra years to your life – even if you don’t start exercising until you are after 50.

We often have more time As they say, it’s not just about adding years to your life, it’s about adding life to your years. So whether that’s taking up or revisiting a hobby, pausing to listen to birdsong, learning a new skill or booking a flight to somewhere you’ve always longed to visit, you can do it.

We are wiser Wisdom is a precious commodity. When our offspring or friends come to us for advice, our personal life experiences help us to help them. We tend to make better decisions because we are emotionally stable and less impulsive than younger people.

We’ve still got it The Seattle Longitudinal Study has followed the mental abilities of 6,000 people since 1956. It’s the longest-running study of its kind, with the same volunteers tested every seven years. While older volunteers aren’t as good at maths and are slower to respond to commands, for vocabulary, spatial orientation, verbal memory, and problem solving abilities they are better in their late 40s and 50s than they were in their 20s.

Better sex Older women may have sex less often than when we were younger, but apparently we really make it count. Studies have shown that older people have more – and better – sex than you might think. One survey of people over the age of 60 found that 74% of men and 70% of women reported a greater sexual satisfaction than when they were in their 40s. Perhaps this is down to women over 50 having fewer insecurities. Annabel and I had a lighthearted chat about sex in this podcast that you might like to listen to.

You stop caring what others think  What were you like when you were younger? I know I was always concerned about what other people would think of me. Then something rather freeing happens as you get older – you simply don’t care so much anymore. Perhaps it’s because we now have a more positive view of who we are – and realise that everyone else has their faults despite putting on a good show.

We are more likely to do as we please Turning down a social engagement in favour of an early night with a fascinating book, or dressing for comfort (is there ANYONE who doesn’t adore wearing trainers?!)

There are some physical benefits too You can wave goodbye to PMS (although it’s good to note that quite a few of us sail through menopause). Our sweat glands shrink and become less numerous as we age. You may find that you have much less, if any, hair on your legs and underarms – no idea but I, and several friends, haven’t epilated for years. Over 50s average only one or two colds a year, as opposed to 20 year olds who can expect up to 3. The same applies to allergies – the older you get, the less severe the symptoms are likely to be. Migraines can become less of a headache as we age, too (again, I can attest to this).

Did you see Grace’s other article How Well Are You Ageing? 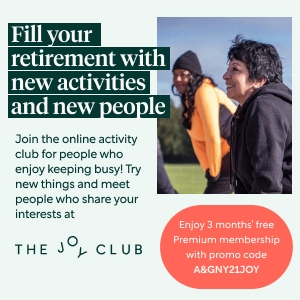