This is the fourth book in the Clara Vine series. I have reviewed two of the previous ones, The Winter Garden and A War of Flowers, in this series and each time I think I won’t enjoy it as much as the last one but I always do.

Jane writes on her Amazon page, “My latest novels feature Clara Vine, an Anglo-German actress and British spy in pre-war and wartime Berlin. My aim was to set thrillers around a character who mingles dangerously with the Nazi elite and to provide a glimpse of the private life of the Third Reich. I also wanted to take a look at the side of wartime Germany that gets so much less attention – the lives of the women. It’s been exciting to trace the development of Clara Vine from the moment she steps off a train at Friedrichstrasse station in 1933 at the age of 26, through the mounting tension of the pre-war years and right into Germany at war. Writing the series has been a revelation to me and I hope you’ll come with me on Clara’s journey.”

Berlin, on the eve of war. As soldiers muster on the streets, spies circle in the shadows and Lotti Franke, a young woman from the Faith and Beauty Society – the elite finishing school for Nazi girls – is found in a shallow grave. Clara Vine, Anglo-German actress and spy, has been offered the most ambitious part she has ever played. And in her more secret life, British Intelligence has recalled her to London to probe reports that the Nazis and the Soviet Union are planning to make a pact.

Then Clara hears of Lotti’s death, and is determined to discover what happened to her. But what she uncovers is something of infinite value to the Nazi regime – the object that led to Lotti’s murder – and now she herself is in danger.

In a drama which traverses Berlin, Paris, Vienna and London, Clara Vine tries to keep her friends close, but finds her enemies are even closer. 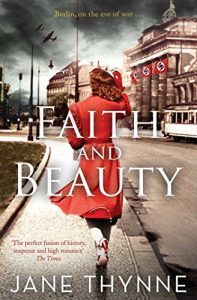 If you love spy thrillers then you will love this series of books. Each book is better than the last and by the time one reads this latest story each reader must definitely have  in their mind a visual of Clara Vine. There is so much truth within Jane Thynne’s story – her research is so thorough that you get a real feeling for that period of history particularly as from the perspective of a female living in Berlin. The suspicion and fear that all Berliners live under which, in Clara’s case, is even more so because she is half British and she has Jewish ancestry which so far she has managed to keep hidden with false papers.

As I finished the book I was distraught as we are left on a cliffhanger. However I have since discovered there is a fifth book in the series already published, Solitaire, which is such a thrill. But I am going to save it for my ‘over Christmas break book’. 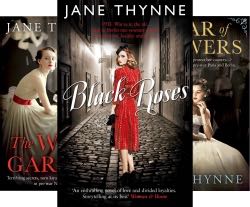 The whole series would make a great gift for anyone who loves this genre. Click here for details and/or to buy.