The fall comes before the pride / CountryWives

I have written lots of nice things about the Camino – the glorious views, closeness to nature, the friendliness of other pilgrims. But now comes the hard graft. 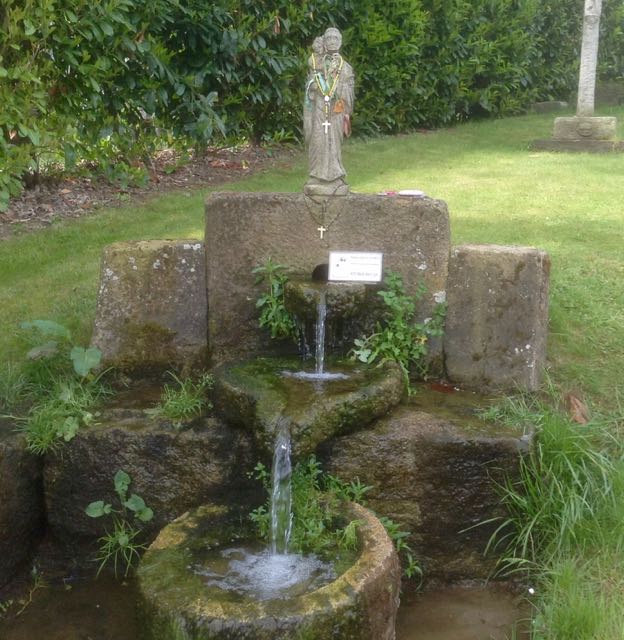 The final few days slog to Santiago takes in forests and very hilly countryside. No sooner have you plodded heavy-legged up a long gritty path (which seems never ending) and stumbled down the other side, than you find there is another ahead of you! It is at this moment that you think why on earth did I decide to do this? You’ve seen people with blisters hobbling round in the evening and others struggling to stretch tired backs from carrying heavy backpacks all day – yet somehow you think it won’t happen to you!

You look after your feet rather better than your face. Rubbing cream in each night. If you even have the hint of a bunion it will hurt and ache by the end of the day. Sometimes you try to keep an even pace up the hills, plod plod plod. Sometimes you stop half way up and pretend you are just looking at the view. Your heart will be thumping as you take another slug out of your now warm water bottle while you stop. Others – fitter and younger – walk past you. Let them go. This is not a race. And, as often as not, you pass them a little later as they have coffee. We are all tortoises and hares. We all have our own pace and style of walking. I like the one stick method. Some like two. We all find our own rhythm. My friend and I have chatted, laughed, reminisced and walked in silence. We have both carefully kept off the subject of Brexit as that is the only thing we really disagree on!

I did think I might see more men of the cloth doing this. And possibly sporty nuns. But of course no one wears the traditional vestments so it’s hard to tell. We did see one man who walked past us with a notice on his back saying FASTING (he did look very thin). I do hope he had a big meal when he reached Santiago.

One particular afternoon our legs were really flagging. You know that horrible feeling when they really ache and your feet are fiery hot. Every time we looked at our map there was another 2km to go. We always seemed to be wrong… it was always 5.  The kilometres seemed to be made of elastic. Finally we got to our destination and eureka, all the pilgrims who had passed us were sitting round a small pool dangling their sore feet in the water. The odd flesh coloured plasters were floating on top and Lord knows what was on the bottom. I hate to think. But we dipped our own tired feet in thankfully. Am sure it was totally unhygienic, but it felt marvellous .

The very last haul into Santiago itself is a a long steep, never ending climb and then a slow descent. But the end is in sight. You can see the spires of Santiago. As we were walking, we were discussing how lucky we had been not having any accidents or indeed a single blister!  And then bingo… I slipped.  I went crashing down sharp gritty steps and took all the force of my weight on one shin. Whether I tripped on my stick or I slipped I’ll never know. It was jolly sore. Two young male pilgrims who had just passed us came running back really concerned. “Was I alright? Did I need an ambulance? ” I struggled up from the unattractive yoga position I seemed to have found myself in and examined my leg. It looked horrible. “Are you sure you don’t want even to be taken to a pharmacy? ” “No no. I’m fine.” My companion, who could see more of my leg than I could said “Don’t worry we will get a taxi for the last bit.”

“ABSOLUTELY NOT” I said ” I haven’t walked this (expletive) far to do the last bit in a taxi!” 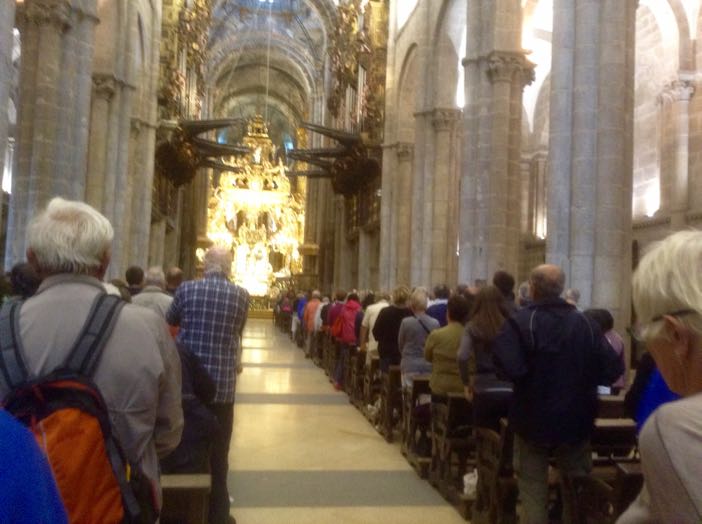 I poured water from my bottle onto my leg and and washed it with a wet wipe. Then put lip salve on it (the only thing we had) and we continued to walk. We were just coming to pavements so the walking was much easier. We had hoped to time our walk on this last day so we could have a coffee and tidy ourselves up a bit before going into the Pilgrims’ mass at noon. Despite my fall we managed to get to the mass with five minutes to spare. I entered the cathedral with a bleeding leg, untidy hair and backpack. Just as pilgrims have done before me for the last nine hundred years. I like to think my slip on the gritty step was just a little reminder to me from someone – I’m not sure who – not to get too pleased with myself!

The service was fantastic. Whatever religion you are, or whether you have no faith except in yourself. The beauty and the atmosphere was really special . Most people there were still dressed in their walking clothes and, like me, still had their stick and rucksack. An elderly nun with the voice of an angel sang each response before us so we knew what to sing. Afterwards we tumbled out to find the nearest bar and drink each others health. 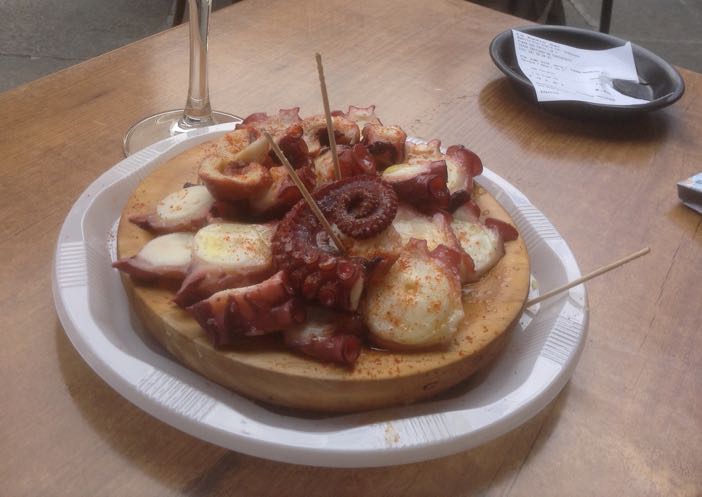 The streets were full of young and old. Babies and parents grandparents and hundreds of pilgrims. We found the open market and ordered pulpo (boiled octopus) and washed it down with copious glasses of white wine. Santiago is a university town so it is also bustling with students who incidentally had all just finished their exams, so there was a huge festive feeling. Indeed so festive that all the bars were full and noisy until 5am.

So there you have it. It was a very very Bien Camino and, if anybody is thinking of doing it, do get in touch if you want some help.