Far East Holidays. Take me to a REAL beach!

I promised you a more inventive opening so I hope I am bringing you something a bit different. An anecdote from a more glamorous circle than my own, and the wonderful, overheard words, “But I want you to take me to a REAL beach!”.

This week I attended an event to mark the opening of a fresh Quentin Blake exhibition at the Jerwood Gallery in Hastings. It was lots of fun, I highly recommend it. And it was there that I overheard this brilliant sentence, from a real cliche of a midlife-crisis asset, the younger-model-future-second-wife. Now, I knew nothing at all about this pretty slip of a thing, except that she was at the same event I was at, and there with an older man who wasn’t her father. So if I sound cruel it’s only elements of my imagination taking over. I’m sure she’s as charming as she was pretty. But the way she delivered her beach-desiring sentence had the kind of moan to it that I recognise from five and six year old children, so I took against her slightly. And then I felt really terrible about making assumptions about the kind of person she might be, based solely on the the limited things I had gleaned about her. So I thought I’d have a chat to her about beaches…

It turned out she wasn’t angling for a trip to St Tropez, she wanted to head east – Far East. I’ve done a few spins around Malaysia, Thailand and Vietnam, so I was able to speak with some authority. I could compare positively the charm of pebbly Hastings with the cool, powder white sands of Phuket. In the end I hope she saw the appeal of visiting both kinds of beach… 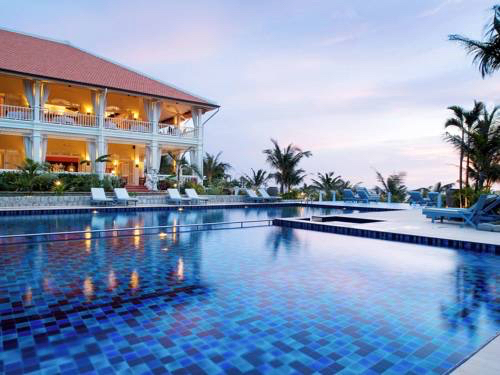 Once an elegant, colonial-era French mansion, La Veranda Resort is now a smart, 70 room boutique hotel. Surrounded by lush, tropical gardens, this is the sort of place honeymoon dreams are made of, where the sunset views are intoxicating, there’s plenty of time for cocktails by the pool and they do an elegant candlelit barbecue on the beach. You’re right on Duong Dong Beach in Phú Quốc. Rooms start from around $270 per night.

Fringed with white-sandy beaches and surrounded by crystal clear waters, it is hard to see why Vietnam’s Phú Quốc Island has taken quite so long to become the must-visit beach escape it now is. Perhaps because much of it is still cloaked in dense, tropical jungle and remains a heavily protected national park? Snorkelling and scuba diving are the most popular water sports here, though jet-skiing, sailing and squid fishing – yes, squid fishing – are other activities on hand, the beaches are exceptional and there’s a fantastic night market.

Practical Details: You can fly to Phú Quốc via Ho chi Minh City, Hanoi and Can Tho, and, in season, it’s possible to get charter flights from the UK. But whichever way you’re hoping to arrive it does pay to be organised as flights seem to be in high demand. From the airport you’ll need to arrange a transfer or catch a taxi to Duong Dong Beach.

Temperatures in Phú Quốc don’t fluctuate too much, with the maximum average temperature between 26°C and 30°C all year round. But there is very definitely a rainy season, between May and October, when you can expect it to rain at least 15 days out of the month. 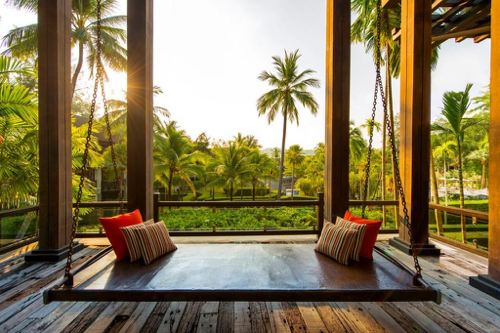 Phuket’s The Slate is five stars worth of stunning tropical landscaping. If you want a magical lagoon infinity pool and a truly luxurious spa then you’ll find The Slate divine. The 177 chic, contemporary, and rather masculine, rooms and suites are well spread out, and there’s a number of peaceful public spaces for relaxing around the resort. The decor features plenty of wood and stone, and the food, and other services, are excellent. Plus it smells lovely here… And you’re just across the road from the beach. Rooms start from around $179 per night including breakfast. 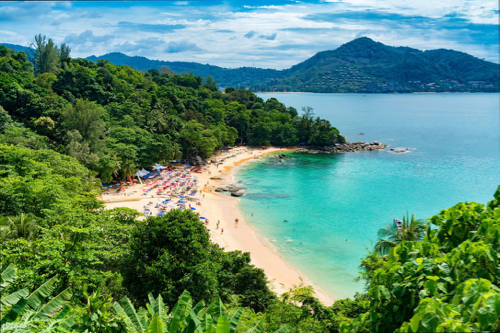 Phuket is one of those daydream destinations to transport yourself to on your daily commute; perfect white, sandy beaches which stretch on until you reach sharp limestone cliffs, and you’ve lush tropical jungle on one side and the famously bright turquoise waters of the Andaman Sea on the other side. Relax, dive, snorkel, explore the jungle, island hop, drink well, eat well and be well looked after. That’s Phuket Island for you.

Practical Details: Phuket International Airport is the second busiest in Thailand, and you can choose to fly direct from Gatwick, or change in Bangkok and fly from almost anywhere. There’s an hourly bus service between the airport and Phuket Town, but there are no buses to the west coast of the island, and so you’re probably going to be relying on taxis – which are more expensive than mainland Thailand – or you could hire a car.

The maximum daily average temperature in Phuket fluctuates even less than on Phú Quốc Island, with temperatures between 30°C and 34°C all year. Again, it’s the rainy season you might want to look out for, between June and October, with September being particularly wet.

For the Ultimate in Barefoot Luxury 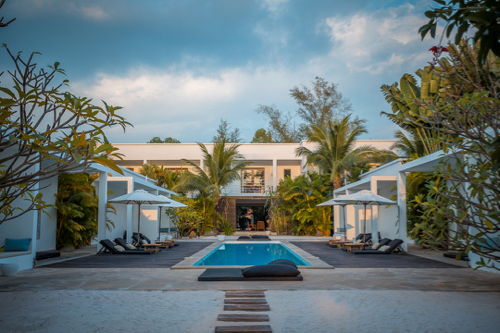 The Tamu Hotel in Sihanoukville, Cambodia has just 15 rooms, its own private beach and a great restaurant. The rooms are simple, with cool, polished concrete floors and retro furnishings, and all have their own private terrace. There’s plenty of space to relax, and maybe do a bit of beach yoga. And rooms start from only $95 per night.

Sihanoukville is a very recent development, built in the 1950s on a peninsula of jungle to the country’s south west, this is Cambodia’s first and only deep sea port. And it’s the port trade which has really created this city, bringing commerce and a cosmopolitan cultural mix to the uninterrupted beaches on its shoreline. Tourism is here, but is still in its infancy, and this is a great place to come for an adventure, or to relax. The seafood is outstanding and there’s plenty to do, and all against a traditional Khmer backdrop.

Practical Details: This might surprise you, but Sihanoukville, does have its own international airport, which is about 15kms east of town. The international connections are still quite limited, at the moment, you can fly to Ho Chi Minh City, Kuala Lumpur or Kunming, China, or you can arrive via other Cambodian hubs. Many people choose to get to Sihanoukville on land, most often via Phnom Penh, but travelling by water is another option.

Sihanoukville is similar to our other destinations this week: hot all year round, with maximum daily averages shifting between 26°C in December to 31°C in April. Here the worst of the monsoon can be expected between June and September.

For Villas on Stilts 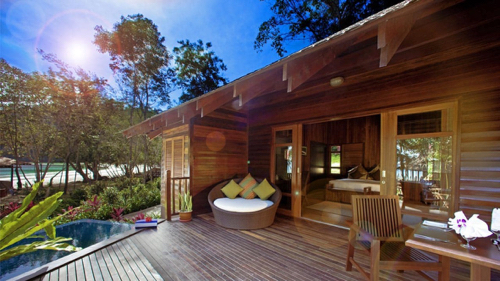 is a laid-back tropical paradise set in lush jungle and on top of beautiful clear waters teaming with marine life. Each villa has two or three suites, and there are 48 in the well spread out complex, so there is plenty of privacy. The beach is gorgeous, but there’s also a 25 metre infinity pool. The spa channels nearby Borneo, and there’s an excellent Malaysian restaurant. Rooms start from around $385 per night B&B.

Kota Kinabalu is thought of the gateway to the wonders of Sabah and Malaysian Borneo. It’s a balmy, tropical city which makes both a great hub for explorations into the jungle-covered hills and the reef-studded seas, and also a great backdrop against which to relax. There’s great access to some of Sabah’s legendary animal sanctuaries, to Mt. Kinabalu and to the spectacular islands of the Tunku Abdul Rahman Marine Park. The weather is perennially warm and humid and the beaches are white and pristine.

Practical Details: Kota Kinabalu Airport is Malaysia’s second busiest after Kuala Lumpur, but it’s a long haul flight from the UK, so most of us will arrive via Hong Kong, Singapore, Perth or Kuala Lumpur. Kota Kinabalu expects daily average temperatures of 28°C all year round, and is positioned to be fairly protected from the worst the annual monsoons bring, but there’s still plenty of rain, it just comes in downpours and clears quickly. Even if you travel during the wet season it’s still not going to put too much of a dampener on things, but it’s probably best to avoid travelling between August and December if you can.

For a Tropical Hideaway 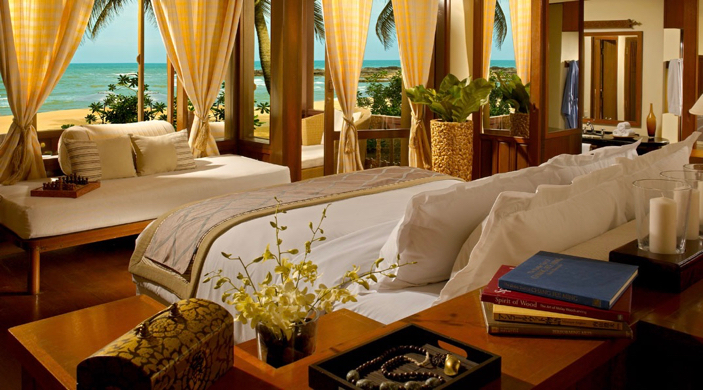 The Tanjong Jara Resort near Kuala Dungun is a classic tropical hideaway with 99 beautiful, creamy rooms and suites with postcard perfect views of a private beach. Palm trees sway, there’s plenty of light, a Malaysian spa, a choice of restaurants, tennis courts and lagoon style pools. Basically everything you dream of in a tropical hideaway daydream. Rooms start from around $175 per night B&B. 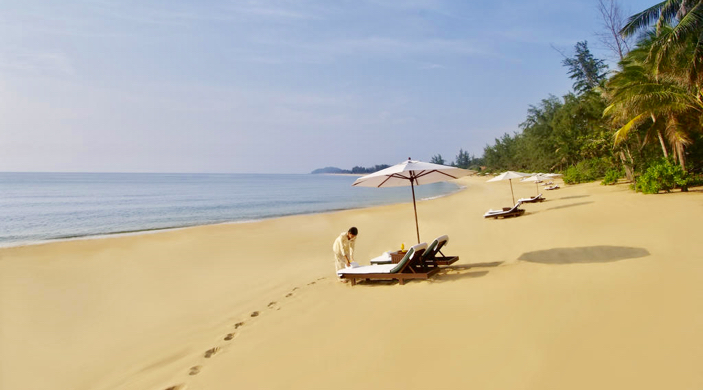 Dungun, and its capital Kuala Dungun, were once busy with iron production, and the graceful British colonial buildings and plantation estates have now been repurposed. But it’s still a beautiful, peaceful spot which only really comes to life on Thursday evenings when there’s a regular night market. But this peace, the beautiful stretch of beaches on the opposite side of the river mouth to Kuala Dungun, and the green interior makes it a fantastic spot for a resort.

Practical Details: Kuala Dungun is not the easiest place to get to. But then tropical hideaways probably shouldn’t be. The quickest way is probably to hire a car from Kuala Lumpur and then drive four hours across the country. You could also get a taxi to do the driving for you. The bus service takes about five and a half hours. It’s possible to get closer by air, to either Kerteh Airport or Kuala Trengganu Airport, but you still have to transfer by car, taxi or bus.

Kuala Dungun is warm all year, with the daily average maximums ranging between 29°C in January and 32°C during April, May and June. Here the real rain comes late in the year, between September and December.