Isn’t this the best time of year for films as the potential award winners all hit our screens? Of course we have all become armchair critics and are bound to disagree with one or two of the awards given. OH and I love to go to the cinema and are very spoilt as we have a Regal Picturehouse within walking distance and a Showcase Deluxe a 15 minute drive away. The latter has those wonderful reclining, leather chairs and a layout that means there are no bobbing heads between you and the screen. Anyway I am no film critic but I shall tell you all about the films that either I or other CWs have seen and can recommend. 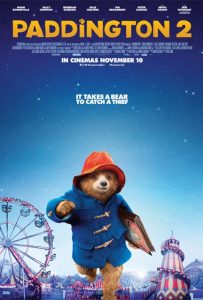 Paddington 2: No it is not just for children as it is wonderful entertainment for us adults too. Hugh Grant is at last showing his acting skills. Do not leave before the credits as there is a fabulous short piece as an epilogue to the film which showcases some of Hugh Grant’s dancing skills which were hinted at in Love Actually. 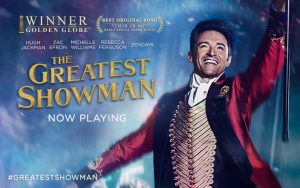 The Greatest Showman: Just a great feel-good and uplifting musical film. Every song is a winner and from the moment the first note is played you know that you are going to enjoy this one. Of course not for the fainthearted who don’t like musical films but a definite for those who loved Hugh Jackman in Les Miserables. 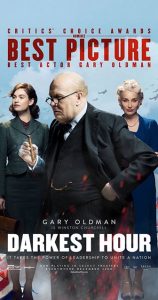 The Darkest Hour: this film has been given five stars by many film critics and deservedly so. There are outstanding performances, even possibly Oscar winning, from Gary Oldman as Churchill and Kristen Scott Thomas as his wife Clemmie. Gary Oldman has already won the Golden Globe for best actor. However the whole cast is consistently good with Lily James at last showing her gravitas as the long-suffering secretary, Elizabeth Layton, and Ben Mendelsohn was impressive as King George VI. It was great to see Stephane Dillane as the snake-in-the-grass Lord Halifax having so enjoyed him in the TV series The Tunnel. You may think you know all there is to know about this period of history but I had not grasped how very close we were to submitting to the rule of the Nazis rather than committing to fight them to the end. 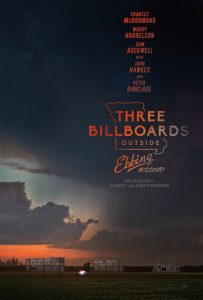 Three Billboards Outside Ebbing Missouri: this films stars Frances McDormand who has already won the Golden Globe for best actress. I have not seen this but I have friends who have and they say it is one to watch. After months have passed without a culprit in her daughter’s murder case, Mildred Hayes (Frances McDormand) makes a bold move, painting three signs leading into her town with a controversial message directed at William Willoughby, the town’s revered chief of police. I am looking forward to this as I love a feisty lady. 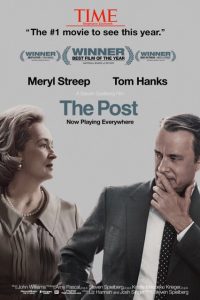 The Post: this must be the dream-team movie – Steven Spielberg, Tom Hanks and Meryl Streep. Katharine Graham (Meryl Streep) is the first female publisher of a major American newspaper — The Washington Post. With help from editor Ben Bradlee (Tom Hanks), Graham races to catch up with The New York Times to expose a massive cover-up of government secrets that spans three decades and four U.S. presidents. Together, they must overcome their differences as they risk their careers to help bring long-buried truths to light. Another feisty, strong lady!

So try and avoid the popcorn as this could be a good month for cinema lovers and is a good way to be entertained on a grey January day.