Lots of people visit Florida and love it. Really Big Love it. It’s one of the West’s biggest tourist hubs. What with all the fun of Disney World, Hemingway’s haunting Florida Keys, a seemingly endless stretch of beach-y-coastline, Miami’s Art Deco glamour and the unique habitat of the Everglades, and all that sunshine. Loads of people want to live in Florida, not just retirees and Cuban exiles. This state has become the home of people from all over the world, who enjoy the Latin American/Caribbean edge to the American dream.

I know two people in particular who wanted to live in Florida and now do. After years of visiting annually, about five years ago our friends Al and Jean made the move. Now they’re having a significant party and there’s much buzz about who will and who won’t be crossing the Atlantic to join in their celebrations. I thought I’d help out with the decision-making process by providing some more fuel for the pro side of the argument. So I tapped the knowledge of the Hotel Guru for recommendations on where we should go and where we might stay. I think you’ll find this a really varied itinerary from which everyone can pick some pleasures… 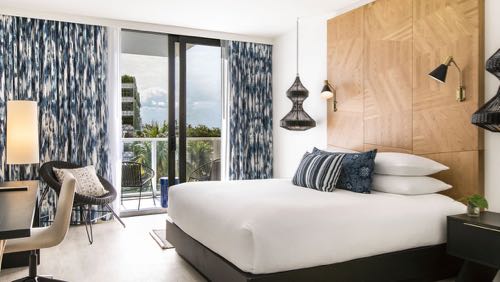 When most of us think of Miami, modern glamour in a sunny setting comes to mind. Here Art Deco beauties display their white, rounded edges with pride against a beautiful bright blue bay edged by another graceful sweep of white. But this time it’s sand. Miami is the beach-babe, unofficial gateway to the Caribbean and Latin America, with a booming business district and Little Havana. It’s where you’ll see people playing dominoes and chatting to each other in Spanish. It’s also close to the Everglades and the Florida Keys. And it has a couple of great art museums.
Where to Stay? In a building which is quintessentially old Miami, The Anglers is a discrete comfortable sanctuary just a few minutes from downtown South Beach. As well as 85 rooms decorated with light fabrics and natural woods, there’s a restaurant, spa and rooftop pool. Rooms start from $198 per night.
Practical Details: Miami International Airport is only a few kilometres northwest of the centre of town, and you can fly there direct from London with British Airways, Virgin Atlantic or American Airlines, with a flight time of around ten hours.
Florida is warm all year round, but it’s more humid in summer and autumn – which is also when you can expect rain showers – so it’s cheaper to visit then. Hurricane season is between June and November, and it’s busiest in winter…leaving spring as the best time of year to visit! 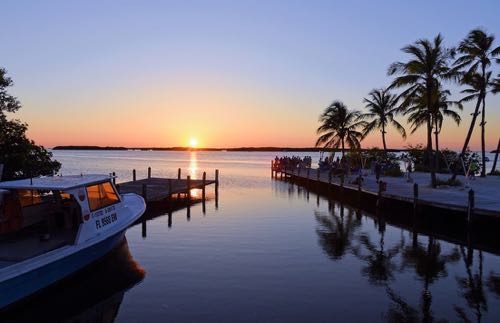 There are around 113 islands making up the famously flat, subtropical archipelago of the Florida Keys, some of them linked by the equally famous Overseas Highway. Eccentric and eclectic Key West, diving mecca Key Largo and Big Pine Key, which is where the Key Deer reside, are probably the best known, and nestled amidst a mangrove forest, Key Largo is the first key you meet as you leave mainland Florida. This isn’t the most spectacular key at first glance, but dive in – most of this island’s main attractions are below the surface of the water.

Where to Stay? The Coconut Palm Inn on Key Largo is a secluded seaside hotel with direct beach access, a private marina and a pool. There are just 19 elegant rooms decorated with light colours and dark wood furniture, and art inspired by nature. Use of bikes, kayaks, paddle boards and fishing kit is included and you can even grill your own supper on the fire pit barbecue if you fancy it. Rooms start from $189 per night.
Practical Details: Both Miami International Airport and the Fort Lauderdale-Hollywood International Airports are about an hour’s drive from the gateway to the keys. Though Miami International looks to have the greatest number of direct flights at the moment. If you’re not trying to fly direct you can hop to Key West International Airport, which is the area’s closest domestic hub.
The best time to visit the Florida keys is between March and May, while June through November in the Florida Keys is humid and hurricane season. 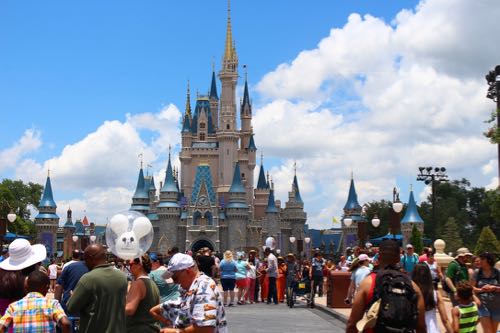 Miami might make us think of sunshine and Art Deco glamour, but Orlando is Disney World, SeaWorld and Universal Studios. However, while you might be here to lose yourself in these magical worlds, don’t forget real life downtown Orlando, which is quite lovely. Tree lined, with beautiful gardens and museums a-plenty, and a very rich cultural calendar, Orlando is a gentle, charming city, often forgotten in amongst all the excitement of the theme parks. It’s also known for its varied cuisine and foodie credentials. 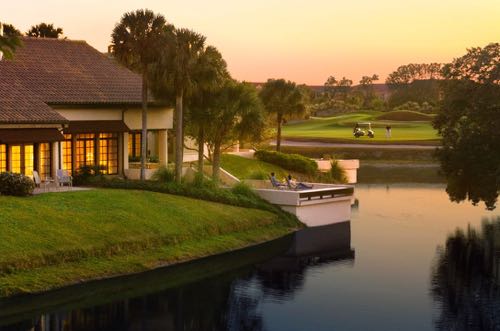 Where to Stay? The Villas of Grand Cypress is a suite-only hotel close to all the theme parks. Activities on offer here include golf, sailing, swimming, cycling and fishing, and there’s plenty of choice when it comes to meal-times. Rooms start from $349 per night.
Practical Details: It is possible to fly direct between Orlando International Airport and Heathrow, Gatwick, Manchester and Glasgow airports, or you can fly to Orlando Sanford International Airport from Gatwick, Manchester, Newcastle, Birmingham, Bristol, Cardiff, Glasgow and Edinburgh airports.
Orlando is famous for year-round sunshine, but the weather is probably at its most perfect between March and May. 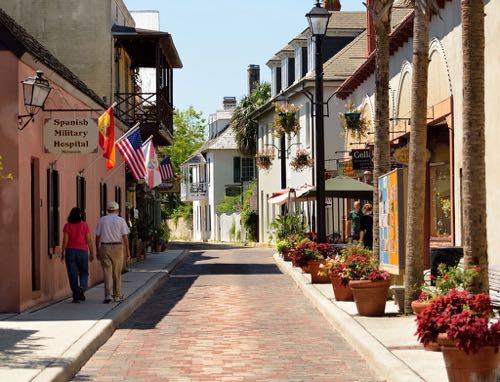 Having been founded by the Spanish in 1565, St Augustine is now known for having the longest continuous European presence in the US. They liked it so they stayed…And what’s not to like? The location is beautiful, sunny and verdant. Since 1565 it has been looted, sacked and occupied by the British, South Carolinian and Spanish forces – as well as by pirates. Today the town has been largely overrun by its National Landmark District Status, which spreads a full 144 blocks of horse-drawn carriages and townsfolk dressed in period costume. But its colourful past, together with the cobbled streets and pretty architecture, lend it an enchanting flavour. And there’s certainly a lot of interest in the numerous museums and historic buildings – which includes a Pirate and Treasure Museum with animatronic pirates, and a 17th century Spanish citadel and Spanish Military Hospital Museum. St Augustine also has about seven miles of beautiful beach and some impressive golf courses. And a number of haunted pubs and inns… 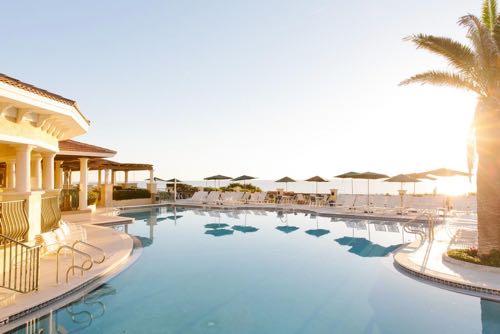 Where to Stay? Casa Monica is a luxurious, opulent and beautifully detailed hotel in the Moorish-revival style – both inside and out. It has 138 rooms and suites, plus a pool, gym, a spa with hot tubs, and a restaurant with a Mediterranean slant. Rooms start from $219 per night.
Practical Details: Jacksonville International Airport is the closest major hub to St Augustine, but you can’t fly there direct from the UK, so you have to change, or fly into another hub and travel cross country.
St Augustine is very popular during the holiday season, so unless you’re coming for the Festival of Lights, the two best times of year to visit tend to be between March and May or September through November.

Amelia Island is just 13 miles from the border between Florida and Georgia, and you can really feel its proximity to the Deep South. It might be its mossy greenness, or the salt marshes, or the look of the island’s main town, Fernandina Beach, which was built as a vacation spot for wealthy folks in the 1890s. These fifty or so blocks of Victorian B&Bs, converted fishing cottages and rather grand historic landmarks, have plenty of stories to tell, and the island has been occupied by the French, the English, the Spanish, the Patriots, Mexican Rebels, the Confederates and the US – and some of them twice over. Beyond town the island is lush and green with miles of shoreline and miles of fairway. 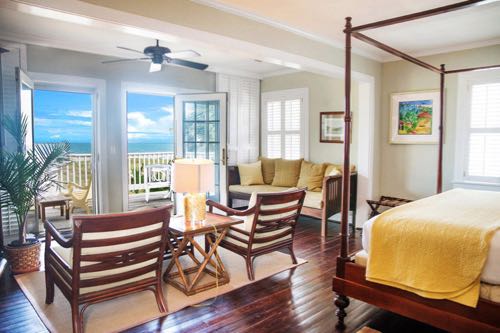 Where to Stay? Elizabeth Pointe Lodge is a romantic hotel right on the beach. The hotel looks old-fashioned, with its charming shingles, wood cladding and wide porch overlooking the sea. There are just 25 rooms and suites, decorated in colours and materials inspired by nature. Every evening they offer complimentary wine and nibbles on the porch, and they’ll also hire you a bike. Rooms start from $249 per night.
Practical Details: Jacksonville International Airport is the closest major hub to Amelia Island, but you can’t fly there direct from the UK, so you’ll have to change, or fly into another hub and travel cross country.
Amelia Island has pleasant weather between February and May and October through December. Summer is very hot, but it’s still the most popular time to visit.

Still not sure where to holiday?  Have a look at our comprehensive travel section