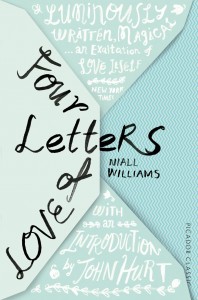 I was spirited away by this story of love that was so pure and strong much like the Ireland that it was set in.

I understand that Niall Williams, the author, with his wife Chris, gave up good jobs and lives in New York to return to the house that Chris’s grandfather had left to go to America eighty years earlier. They both wanted to write and Chris wanted to paint as well.

This novel, Four Letters of Love, took 10 years to complete and it is Niall’s determination and belief that this story would eventually come to him that is expressed so strongly in this book of passion and belief in self and in a love that would conquer all. Niall himself admits that “it was a reckless choice to abandon jobs” but then it is these plunges into the unknown that often result in greatness and this brilliant book is the result of Niall’s personal plunge.

Nothing prepared me for this love story and its prose which was more like poetry it was so lyrically written. Two lives that are separate but destined to be together, a mother’s love that forces her to make choices to keep the order of her family’s life and all against the background of an Ireland that is so pure and simple. It is human life at its rawest written with an unbelievable insight into Love – was the author drawing on his own experiences or does he just have the ability to delve into the deepest of human emotions and express it so beautifully in words.

The story is simple and slow but totally engaging and the book has rightfully earned it place among the classics of Irish literature. I would recommend this book to anyone as Niall William’s beautiful writing deserves to be experienced by everyone.