For Fox Sake - Where Was Tonto? - Annabel & Grace

My ‘Oldest Married’ and her hubby were rudely woken by a loud crashing coming from their kitchen. It was about three in the morning – far too early for horrid noise. Naturally it was assumed to be a burglar, so the son-in-law jumped out of his bed and, armed with a handy broom (?), sprinted out to confront the thief. This was extremely surprising behaviour in itself. Extraordinary! The fact he happened to be very naked didn’t put him off issuing a terrifying Braveheart roar as he ran into the kitchen (from whence the noise was coming from) brandishing his weapon. He screeched to a halt as the sight that met him made him wish he’d stopped to put on some clothes (certainly pyjama bottoms).

An adult, healthy-looking fox was so nonplussed by Braveheart, that he momentarily forgot his paw was in the toaster. He waited patiently whilst he posed for a photo taken for future exposure on Facebook and then re-adjusted his stance to contemplate his predicament. This wasn’t looking good. 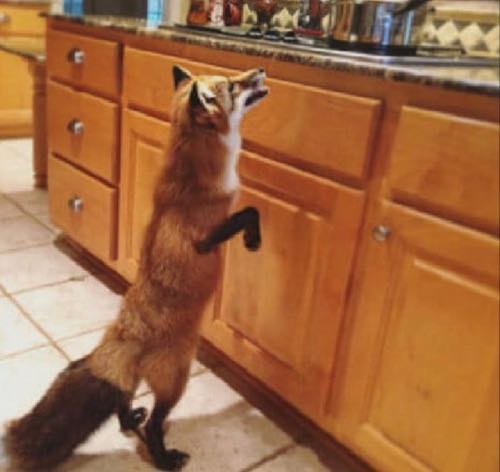 The roaring had stopped thank goodness, but the naked man remained. The naked man was even attempting to stroke the fox’s neck with the broom. The son-in-law said that it may have looked like stroking but in reality it was more persuasive pushes! They could have gone on like this all night. The fox rather enjoyed the tickling.

Once the pregnant Oldest Married arrived on the scene, she suggested a cheese trail to tempt the fox away from toasting anything else. The cheese was placed in a haphazard line towards the now open door. The cat flap had been the intruder’s entry point earlier. They then made a makeshift barrier against the fox having free rein to any other part of the room. It was a pop-up border control.

The fox didn’t think much of the cheese or the trail and sauntered past it to make a dignified exit away from naked man and the woman who was wishing that she hadn’t wasted all that cheese on such an ungrateful recipient (this frantic activity had made her rather peckish).

Now that the garden door was firmly shut against further invading wildlife, they looked about to view the carnage left in the fox’s wake. Muddy footprints all over the white floorboards showed that the fox had sauntered right up to Tonto’s bed. Tonto is the huge Northern Inuit dog that would guard (with his life) my daughter and her family from anything that could be deemed a threat. Apparently not foxes though.

When naked man ran past waving a broom and issuing his war-like blood-curdling screams, Tonto was heading the other way. This intrepid, courageous guard dog ran to his own safe haven, behind his mistress’s bed! “Nice and safe … here! Phew .. That was most unpleasant! Maybe, whilst I am here I could get a bit more shut eye? Madness not to!”