I had mixed emotions about seeing this film as I thought it was going to be a war movie with Brad Pitt thrown in for a bit of sex appeal. I knew a lot of the outdoor scenes had been filmed locally as the lovely 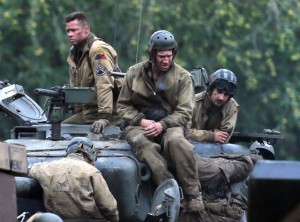 Brad was seen in Henley on quite a few occasions. However I had no idea how good this film was going to be. Set over 24 hours in April 1945, Fury follows the fortunes of a Sherman tank commander called Don “Wardaddy” Collier (Brad Pitt) and his crew as they find themselves behind enemy lines, outgunned and outnumbered, in a desperate last pitched battle to the death. Much of the movie tracks the evolving relationship between Wardaddy and Norman “Cobb” Ellison (Logan Lerman), a fresh recruit shocked by the reality of war. The detail is graphic and whilst I am sure not all the details are totally accurate I thought it portrayed the complete exhaustion and dirt of war fuelled sporadically by great rushes of adrenalin as they engaged in combat.

As they march further into Germany the sheer senselessness of these final months are portrayed through the eyes of the new recruit Norman. The sense of patriotism of the Germans to fight until the last drop of blood had been shed comes across as in one scene the Fury soldiers see they are fighting young boys.

It is definitely a film worth watching and is not just for the men!