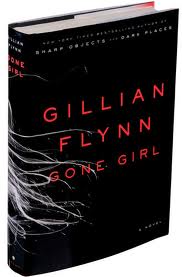 I was told that this book was the big sensational blockbuster sweeping America and more recently the UK since it was published over here in January 2013. However I have never been someone who reads blockbusters (never even turned a page of Fifty Shades of Grey) and I have never been very keen on American literature. I think it is something to do with liking books that relate to my life (probably very narrow minded of me I Know) so this book was never going to be for me or so I thought…..
AMAZON DESCRIPTION:
‘What are you thinking, Amy?’ The question I’ve asked most often during our marriage, if not out loud, if not to the person who could answer. I suppose these questions stormcloud over every marriage: ‘What are you thinking? How are you feeling? Who are you? What have we done to each other? What will we do?’ Just how well can you ever know the person you love? This is the question that Nick Dunne must ask himself on the morning of his fifth wedding anniversary when his wife Amy suddenly disappears. The police immediately suspect Nick. Amy’s friends reveal that she was afraid of him, that she kept secrets from him. He swears it isn’t true. A police examination of his computer shows strange searches. He says they aren’t his. And then there are the persistent calls on his mobile phone. So what really did happen to Nick’s beautiful wife? And what was in that half-wrapped box left so casually on their marital bed? In this novel, marriage truly is the art of war…
But I was drawn into this book and could not wait to get back to it, even resented having to cook a meal for the family it so gripped me. On reflection I realise that I did not like either of the main characters, Nick and Amy, particularly Amy who is a she-devil. Yet there was this a fatality about this book that made you want to make sure that justice was achieved even if you did not really care what happened to either of them as they sort of deserved each other!
I enjoyed the way it was written in the form of the story being told from two perspectives, Amy and Nick, in alternating chapters and right until the last page it keeps you hanging on a precipice….overall a great read though I am not sure why it is becoming the ‘must read book of 2013′ but then I never read that ‘must read of 2012’!!