GRACE: Annabel and I hopped on trains and zoomed in from our respective parts of the English countryside into the heart of London this week. Passing the shiny glass building that is the new home of BBC TV, we walked, shivering in the greenhouse gas spring weather, into the warmth of Amanda Wakeley’s London showroom.

We were welcomed with a glass of pink champagne, offered baby cupcakes and invited to look, touch, take photographs – even try on, any item we liked from the selection of glamorous garments that were hanging on rails on three sides of the room. We looked, we touched, we took pix but – try on? Were the PR people having a laugh? Everything was size 8. As I am almost twice that size, I busied myself looking at the scarves which are, thankfully, one size fit all.

There were two roaming six foot something beanpole beauties who were there to model any of the clothes we wanted to put them in – great fun, rather like dressing real live Barbie dolls!  Not sure who the other invitees were but we were about twenty years older than most of them. Most of them looked like they were taking time out from revising for their AS Levels and were much more casually dressed than us – we had agonised over what to wear – well you would wouldn’t you – and had both turned up looking rather smart (we thought).

“Do tweet and FB any of the pieces you like” requested one of the PR team, so we took these sneak preview pix for your delectation. More of the new collection next month – it actually is much more wearable than you would imagine from Ms Wakeley (who, unfortunately, did not grace us with her presence).

We may have been rather rural/mature for this haute couture event but I think AW’s team may just remember us…I knocked a champagne glass over which someone had thoughtfully left on the edge of a table of accessories and which then smashed into a thousand loud pieces onto the floor. And when Annabel owned up to wearing an Amanda Wakeley coat she had bought many years ago, she was practically mobbed by a flurry of PRs in their eagerness to snap her vintage outerwear. Soooooo gloriously last decade darlink. 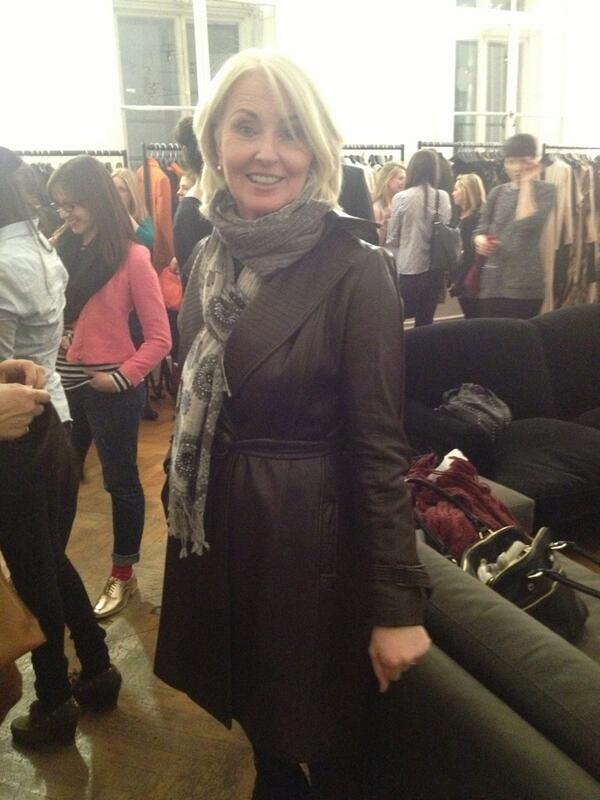 ANNABEL: Vintage coat, vintage wearer and surrounded by the Amanda Wakeley fashionistas I still felt we cut quite a dash. Having said that I don’t think the party really began until the first cupcake had been eaten. I’m not sure that either of the models had ever allowed a cupcake to pass their lips in case it settled on their hips! However this vintage CW was not going to miss out on a sugar rush and washed down with a glass of pink bubbles we two country girls were off, chatting to anyone who cared to listen to some old time opinions!

The recently appointed CEO told us that AW is now being described as “Clean Glam” which I guess describes the clean lines and the inevitable glamour associated with an Amanda Wakeley piece. Grace and I espied a classic wool boucle collarless coat with leather lining (so soft it must have had some alpaca or cashmere in the mix) which we both felt would fit nicely into our wardrobes so, vowing not to eat a creme egg over this weekend and with a casual remark of “It will last us a lifetime” to our OH’s and a generous spirited bank manager when we tell him this is an ‘investment piece’, we departed the showroom with a spring in our step!