Sensational Summer Days in Greece and Cyprus / The CountryWives

It’s sunny in my garden, and sunny weather makes me dream of more sunny weather in a slightly warped way. So I’m focused on sunny destinations, dreaming of the sunshine-washed shores of Greece and Cyprus, of white villas, stone-clad farmhouses surrounded by olive groves and welcoming hotel pools in the brightest of blues. To match the clear, sunny skies. And to help capture the daydream fully, and to put it within our sights, I have a few recommendations for places to stay… 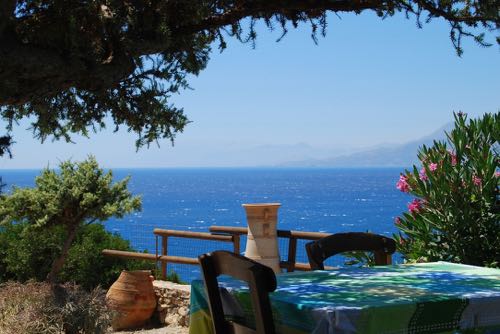 Crete
Crete is the largest of the Greek islands and a naturally diverse beauty. But, as well as her rugged mountain ranges, slicing gorges, fertile plains and beautiful, sandy beaches, she’s also wealthy in both archaeological and mythological treasures. Crete is perfect for an affordable, sunny escape, or for a walking holiday, a luxurious beach break or a cultural odyssey. Whatever reason for your visit you shouldn’t miss the Minoan palace at Knossos – home of the minotaur and his labyrinth, or Heraklion and its incredible archaeological museum. Polyrinia was one of ancient Greece’s most fortified towns, so it’s a pretty fascinating place to see too, and Chania’s harbour is magnificent. While Rethymno has the Venetian and Ottoman treasures. 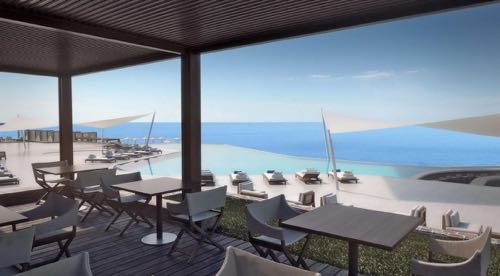 Nana Princess in Hersonissos, does not look like it sounds. This 112 room hotel is extremely contemporary and extremely luxurious. There are suites and villas as well as rooms – the villas and the suites have private heated pools and stunning views of the hotel’s private, sandy beach. There are three fine dining restaurants and a state-of-the-art spa too. Rooms start from around €477 per night B&B, but they’re offering up to 35% discount if you book your summer stay before 18 June 2018.
Practical Details: Crete’s main airport is the Nikos Kazantzakis International Airport, which is about five kilometres outside Heraklion, and welcomes direct flights from Gatwick, Stansted, Luton, Edinburgh, Bristol, Glasgow, Leeds Bradford and Manchester. During the summer you can also find direct flights to Chania Airport. Crete’s sunshine and warmth really kicks in from May, when you can expect average maximum temperatures close to 25°C. By July and August the maximum daily average is almost 30°C. 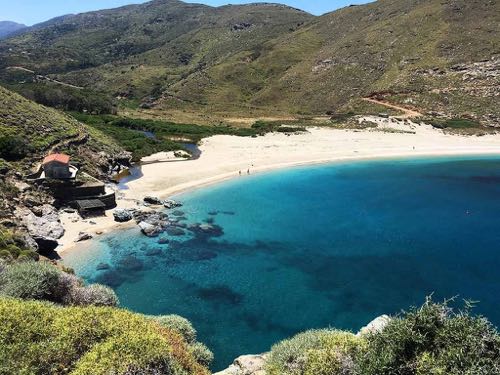 Cyclades
For the classic Greek island experience of sunshine on rugged rocks rising out of bright azure seas, peppered liberally with towns like stacked sugar cubes, you’ll be wanting to visit the Cyclades. There are spectacular cliffs and coves, but there are also near perfect beaches. And impressive archaeological sites. There’s also fantastic food and drink and plenty of fun to be had of an evening. There’s plenty of diversity in the group, too though, and you can easily ferry hop between islands if you want to hike on Andros, admire the beauty of Santorini, relax on the beach on Paros and party with the ‘cool kids’ on Mykonos.
Where to Stay?

Onar is a collection of ten traditional cottages on a secluded, sandy cove on the east coast of Andros, where the waters are crystal clear. Each cottage has spectacular views, stone walls and white washed interiors, and sleeps between three and seven. Plus there’s a restaurant serving delicious traditional cuisine with many ingredients grown on site. The villas start from around €190 per night including breakfast.
Practical Details: Andros is green and mountainous, with a spring to rival Evian and golden beaches. The best way to get to here is via ferry from Rafina. So you may as well fly into Athens airport, which is only about half an hour away. The ferry trip between Rafina and Andros takes about two hours. Andros is mild all year round, with maximum average temperatures around 16°C even in December, but it’s nicest during the summer months, and during July and August the average daily maximum temperature is 32°C. 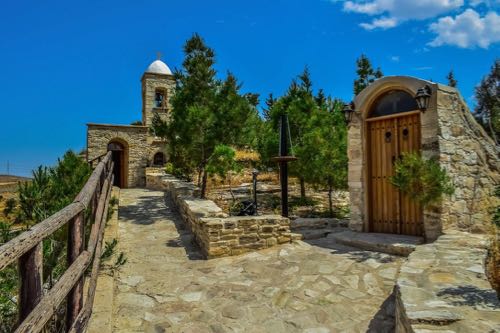 Cyprus
Cyprus is the birthplace of some of the greatest travel-writing clichés of all time, but they’re hard to avoid: it really is a country of contrasts, where old meets new, where the mountains meet the sea, where east meets west and where you can ski and swim in the same day (at least at certain times of year). Cyprus also boasts a number of world-class ancient relics – notably, the Hellenistic mosaics of ancient Paphos; the huge Roman theatre at Kourion; the medieval castles at Colossi, Limassol and Larnaka; and the wonderful frescoed Byzantine churches of the Troodos. 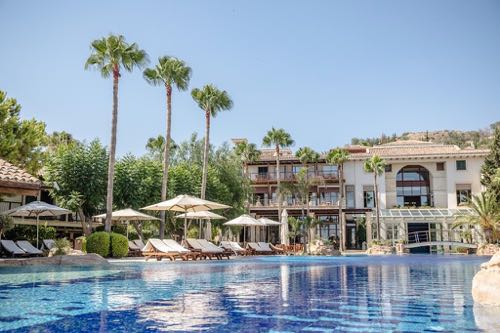 Where to Stay?
The Columbia Beach Resort on Pissouri Bay, is in a beautiful spot right next to a private beach. There are 95 suites, many perfect for families. The resort has all the ingredients you need for a romantic break, but it’s also very family friendly, with a kid’s club and a great kid’s menu. The pool is enormous, the spa is spoiling and the décor is all stone floors, wooden furniture and sea views – sometimes from private balconies. Rooms start from around €340 per night B&B this summer.
Practical Details: You can fly direct to Cyrpus’ Lamaka Airport from Heathrow, Gatwick, Stansted, East-Midlands, Newcastle, Manchester and Glasgow. Or you can fly direct to Paphos Airport from Heathrow, Edinburgh, Bristol, Manchester, Luton and Gatwick.
During July and August Cyprus’s average daily maximum temperature is 26°C. But Cyprus is a sunny destination, and visiting any time between May and October will probably see you enjoying great weather. 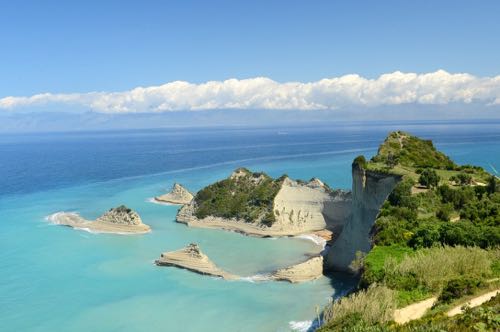 Corfu
Greenest of the Ionian islands, Corfu has long been a favourite of people who enjoy their beach break with a side of culture. Corfu has been welcoming tourists for 130 years at least, since the concept was born, but even before that Corfu’s landscape was inspiring Homer, who called it a ‘beautiful and rich land’. Mountainous in the north, with steep, dramatic cliffs and pebbly coves, it flattens off below Corfu Town and the beaches become sandier and longer. Corfu Town is the island’s capital and home to many of the best museums and most beautiful architecture. The Spinanada, the esplanade between the Old Fortress and the Old Town, is where you’ll find many of its highlights. 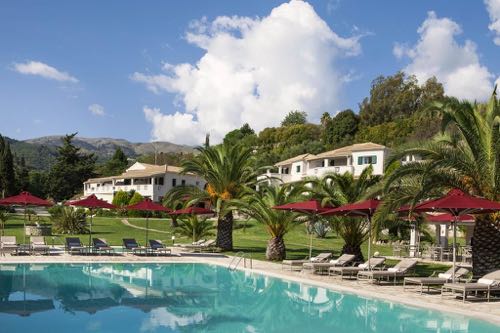 Where to Stay?
Corfu’s Bella Mare Hotel is a peaceful, relaxing spot, with 21 sea-facing studios and apartments. The décor is chic, but it’s very family friendly, and there are lovely gardens and a pool. It’s also great value, with rooms starting from €135 per night B&B.
Practical Details: You can get find direct flights to Corfu International Airport from Heathrow, Gatwick, Luton, Stansted, Birmingham, Bristol, Manchester, Newcastle and Edinburgh – at least. During July and August temperatures can soar up to the mid-30s, but Between May and June and September and October maximum daily average temperatures are mid-20s to 30ish, with a pleasant breeze.

Peloponnese
Backdrop to many of the highlights of Greek mythology, the beauty of the Peloponnese region has not been spoilt by the years. For many visitors the construction of now ruined Mycenaean palaces, Roman theatres, Venetian fortresses and Byzantine churches has added to the region’s natural attractions: beautiful beaches, mountains high enough to get snow in season, dramatic gorges and lush soil perfect for vineyards and citrus groves.
This peninsula has wild places and perfectly ordered places, and there’s plenty of beauty at both ends of the scale. This isn’t an unknown destination, but there are still plenty of out of the way towns and villages where you can find peace amongst the beauty and the slower pace of life. 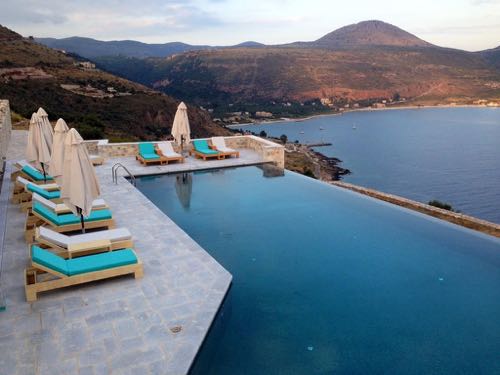 Where to Stay?
The Petra & Fos Boutique Hotel & Spa is a traditional, 23 room hotel constructed from stone on the dramatic southern cliff of Mt. Taigetos. As well as spectacular views of the peninsula, this hotel has elegant décor, with exposed stone walls and wood-beamed ceilings. There’s also a beautiful infinity pool. Rooms start from only €132 per night B&B.
Practical Details: The Peloponnese peninsula has no major airport, you have to fly in via Athens, and then drive, or catch the bus or train. This region enjoys a Mediterranean climate with temperatures ranging between 13°C in winter and about 30°C during mid-summer. It’s sunny and dry during summer, so if you don’t like things too hot it’s better to wait until September.

About Us
The Hotel Guru has done your hotel research for you. We’ve commissioned a collection of leading travel writers and journalists to offer their recommendations on where to stay, found out all the important, and minute, details about each property, and then cross referenced that with guides we respect. So if having a hot tub is important to you you can search by that, likewise pet-friendly properties and hotels with a great wine list. For more destinations, click here