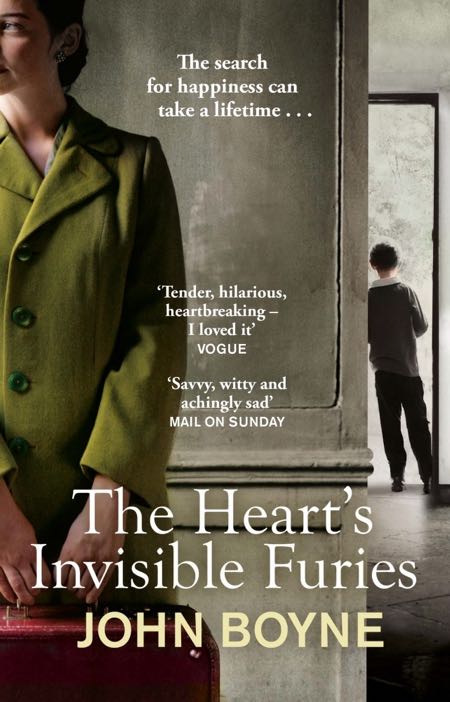 A few weeks ago, my son in law lent me The Heart’s Invisible Furies by John Boyne. He said it had had a profound effect on him. After I had read it I could see why. My son in law was adopted in England in the 1970s. His mother was an Irish girl who came to England to give birth and have her baby adopted. This was to avoid the shame it would bring on her family back home in Catholic southern Ireland. He has never met his birth mother.

John Boyne grew up in Dublin during the 70s and 80s. He has been asked many times why his novels are not set in Ireland. Originally he said he would write a book when he had a story to tell. Well he did have a story to tell but it has only been in the past few years that he has been recalling events he would rather forget.

He was brought up in a strong Catholic household where the Church meant everything. Boyne was subject to horrific abuse by the Catholic priests he was an altar boy for. He was fed stories of terrifying punishments, both here in this world and then in the world to come, if he told anyone of the abuse. He was beaten with a heavy weighted stick and sexually abused. Lay teachers would collude too. They knew full well what was going on.

When he was 13 he realised he was gay. He was told he was sick and needed electric shock treatment. This upbringing has since blighted most of his adult relationships and led to repeated bouts of depression.

It is against this backdrop that John Boyne has written The Heart’s Invisible Furies.

The story’s main character is Cyril Avery. His sixteen-year-old Mother Catherine Goggin was chucked out of her church and village. She was humiliated publicly by a sadistic priest and after great hardship Catherine takes the heart-breaking decision to have Cyril adopted.

He is adopted into the Avery family. The family always insisted he was not a true Avery and he was to think of his upbringing as a “tenancy” which lasts for 18 years. This concept took Cyril years to overcome.

In 1952 Cyril is 7 yrs old and “Even at that tender age I knew there was something about me that was different and that would be impossible to put right.” His sexuality leads him into a life of fear, secrecy, shame and guilt. These feelings lead him into many disastrous and destructive relationships. He marries for social acceptance but that does not last. He has a close relationship with a childhood friend and a very close and finally loving relationship with a Dutch doctor.

Boyne argues passionately that self-transformation is not only possible but it is essential.

It is a compelling novel of post war Ireland ending in the present day with the knowledge that Ireland voted for Gay Marriage in a referendum. Of course, there are still those who carry on the old Catholic beliefs.

This is a novel that contains all emotions and it is not without its comic side and I thoroughly enjoyed it.

If you think you would enjoy this book click here