A few days ago a friend of mine sent me an emergency email, with “Whoops! I’ve Forgotten to Book!” in the subject line. She then went on to say: “It’s a significant birthday for Mr. this August and I promised to book something around the middle of the month… and ARGH! I haven’t! Where should I being trying to go?” If you want to hear a great gush about how wonderful a certain place is then I’m a good person to ask travel questions. However on the practical front: where might there still be holiday availability for this Summer at the moment?  I need to get help myself. So I got recommendations for my friend from some of the Hotel Gurus, who offered me a surprisingly rich range, considering she’s only given us about six weeks before she wants to get on a plane… 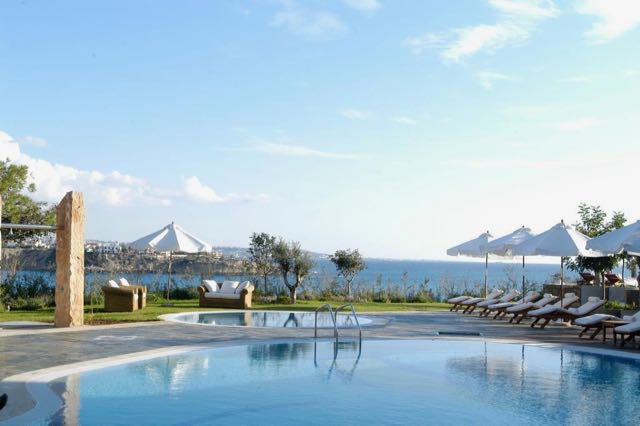 Why not relax in Cyprus?
The Thalassa Hotel is a sophisticated adults only beachfront property with 60 rooms, two excellent restaurants and a fabulous sea view. Prices start from around £179 per night, though if you want to push the boat out book a suite – they come complete with a private butler. There’s a fancy spa with a comprehensive list of treatments, including detox and weight loss packages, and two restaurants. And it only opened in 2004, so it’s all quite new still. Most of the rooms have beautiful views over Coral Bay and around the coastline to Paphos – which is the nearest town and about 15minutes away.

Cyprus has ancient relics: medieval, Byzantine, Roman and Hellenistic; mountains which run right down to the beautiful coastline in places – so at some times of the year you can ski and swim all in one day; a wild interior and a collection of characterful beach resorts – and some more touristy ones. There are two international airports, Larnaka and Paphos and there are fairly frequent direct flights to both airports from Heathrow, Gatwick, Luton, Stansted, Manchester, Bristol, Edinburgh, Glasgow, Leeds Bradford and other UK airports. Cyprus has a Mediterranean climate, but being close to southwest Asia, it’s actually one of the hottest spots in the Med. Temperatures start to warm up in April and peak in July, and in Paphos the average maximum temperature for July is 30°C. 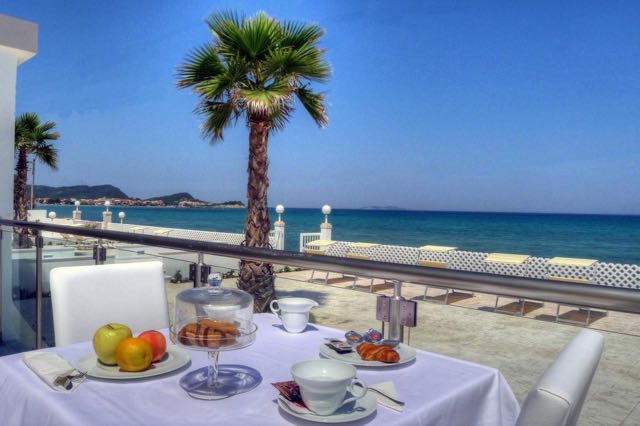 What about a beach break on Corfu?
Sidari Beach Hotel is a stone’s throw from the beach and the village centre, and has 30 elegant contemporary rooms with fantastic ocean views. Recently (and stylishly by the looks of it) renovated, this hotel is in a great spot for both a beautiful sandy beach with clear, shallow waters, and the wilder side of Corfu’s landscape – which is to the back of the hotel, past the inviting looking pool and snack bar. There are 29 rooms and three suites, many with private terraces, and a lovely garden, separate pools for kids and adults and a Greek/ Italian restaurant. Rooms start from around £125 per night.

Corfu is a longtime favourite of beach breakers who like their sand and sea with a side of culture. It’s the greenest of the Ionian islands and has some fantastic museums and beautiful architecture, and some perfectly picturesque towns and villages, both on the coastline and in the cypress-forested interior. Corfu’s greenness is due to the extra rainfall it receives, though it’s still generally dry and sunny during the summer months. Cooler than many of its neighbours, a regular wind solves the problem of summer afternoons starting to broil. Even in July and August the maximum average temperatures hold around 30°C. During summer you can fly to Corfu with BA from Heathrow four days a week, but you can also fly from Gatwick, Luton, Bristol, Manchester, Stanstead, Birmingham, Newcastle and more. 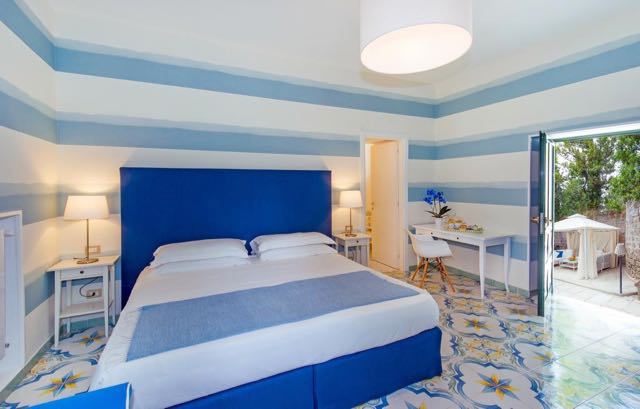 How about a sophisticated break in Sorrento?
The Relais Correale Rooms & Garden are just six rooms in an elegantly renovated farmhouse, surrounded by a beautiful garden of olive, orange and lemon trees. For around £245 per night, this rather beautiful B&B close to the centre of Sorrento looks like a sophisticated stay. The decor is chic and airy, with ornate blue and white tiles and traditional fabrics. Plus the outdoor space is a real value add if you want to relax any time of day and the breakfasts are, we hear, excellent. Plus the junior suite, pictured, has its own jacuzzi…

Sorrento in my opinion, is one of the most beautiful places in the world. It’s frequently described as ‘a jewel of the Amalfi Coast’ and I think that’s fair. Perched on the edge of the cliff overlooking the Bay of Naples and Vesuvius, this is an historic resort town par excellence. The range of local eateries is extensive, there are some charming local industries offering rather beautiful souvenirs, and there are blissful markets. The climate is Mediterranean, with hot, dry, sunny summers. Expect 13 hours of sunshine a day with maximum averages hitting 29°C in midsummer. Naples’s Capodichino Airport is served by BA and Easyjet from Gatwick, but you can also get flights from smaller, regional airports and cruise in via Naples.

Or a romantic finca in Mallorca?
Cases de Ca’s Garriguer is a gorgeous, boutique-y, 12 room finca just outside Valldemosa, and close to some beautiful bays and beaches. Traditional farms, with their outbuildings and land, have been converted into beautiful mini-resorts with lovely pool areas, gardens and spacious accommodation. And the Cases de Ca’s Garriguer looks like a great example. There’s a lot of bougainvillea, some spectacular views, lots of space and individually decorated rooms.

Largest of the Balearics, Mallorca is blessed with the three ’s’s in spades, but it also has some of the Mediterranean’s most beautiful natural scenery. And fincas are a great option if you’re interested in seeing this side of the island too. The coastline is really something as well. Plus the food is great. Weather-wise the summers are hot and dry. August is the hottest month, and it’s not until then that maximum average temperatures hit 30°C. During summer, Palma airport claims it’s one of the world’s busiest, and airlines fly from most UK airports. Alternatively you could cruise there? Or drive in about 24 hours? 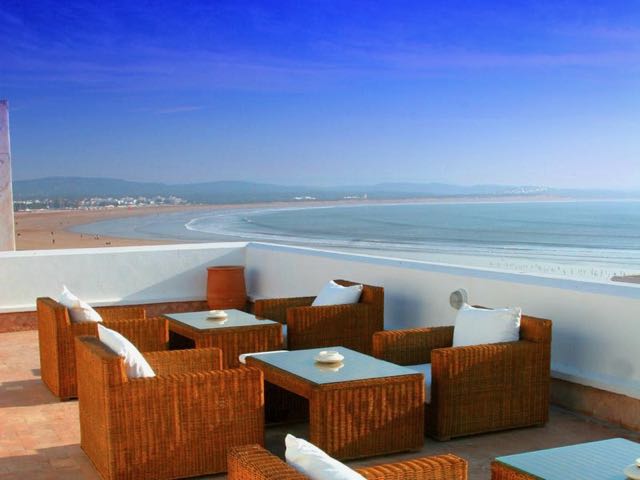 What about affordable luxury in Essaouria?
Madada Mogador offers the kind of luxury foodies and style lovers are looking for. Everything smells good and looks amazing, uniting for an exotic sensory experience – and it’s friendly too. Apparently this is the place to come if you want to go to cookery school or eat really well, and enjoy beautiful surroundings and ocean views. There are just seven rooms, so it’s quite intimate, and there are huge baths, which they say are great for a soak after the souks. Prices start from as little as £105 per night including breakfast.

If you enjoy that moment when Peter O’Toole rides in off the desert in Lawrence of Arabia, then Essaouira is for you. It’s definitely Moroccan, but there’s also a European familiarity to it – having been designed by a Frenchman. The beach is long, curving, and windy – windsurfers love it – and the port isn’t just a pretty museum to its past, it’s still very much working. And the souks are less of a hassle than those of Marrakech. Temperatures in Essaouria peak in July, and during August the maximum averages sit between 20 and 25°C. At the moment Easyjet is the only airline that flies to Essaouria from the UK, all other carriers require you change in Marrakech, or you can go via France.