Great Escapes (AKA GET ME OUT OF HERE!) - Annabel & Grace

There are some days when sitting down somewhere peaceful with a hot cup of something isn’t enough of an escape. And even a brisk walk or locking yourself in the loo isn’t going to do it. On those days I stick a pin in my map and start planning a proper holiday escape. Sometimes a geographically remote hideaway is what’s required – Easter Island anyone? What about a volcano in Ecuador?  But sometimes just getting back to nature in a relaxing setting would be enough. So, whether you’re seriously looking for an escape, or you just need to have a proper escapist fantasy, here are some fabulous places to think about: 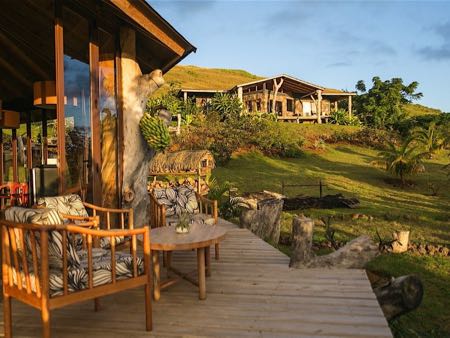 Get Away to Somewhere Geographically Remote
Hare Noi on Easter Island is a nine room hotel a few miles outside the island’s only town, Hanga Roa. There’s a very tropical feel to the place, with plenty of wood and stone, and fabric design inspired by the art of the island’s first inhabitants, but in chic, almost mid-century style. There’s also a spa and a restaurant, so this is a comfortable and relaxing escape. Rooms start from around £251 per night.
Practical Details
Easter Island is subtropical, so it’s the ocean currents which have most affect on the weather. January and February are the hottest months and July and August the coolest. Most travellers fly to Easter Island with LanChile from Santiago de Chile, or from Tahiti. You’ll probably get the cheapest deal if you book the rest of your flights using LanChile too, and they’re partnered with Air France and Air NewZealand for the flights to Tahiti, and a range of other airlines to Chile.

Get Away From It All and Relax 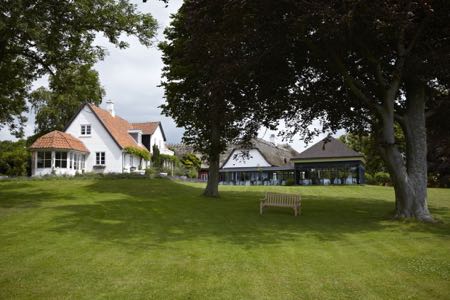 Falsled Kro is a beautiful, thatched-roofed, old inn set amongst the superb scenery of historic Faaborg on Denmark’s Funen Island. There are 19 good sized rooms with peaceful views and minimalist decor, plus a Michelin starred restaurant – Denmark’s first – which spills out into the garden when weather permits. And a garden which leads all the way down to its own sandy beach. The hotel also has access to the nearby Faaborg golf course and there’s tennis courts too. If you need to you can arrive by yacht or by helicopter. And some guests do…  Rooms start from around £300 per night.
Practical Details
From London it takes about 14 hours to drive to Faaborg. Or you can fly to Copenhagen Airport and then drive about two hours, or catch a train and then a bus which will take about two and three quarters hours. Faaborg has what many of us would consider ‘pleasant weather’, meaning lots of sunny days with maybe a smattering of cloud and maximum summer temperatures around the low 20s.

Getting Back to Nature 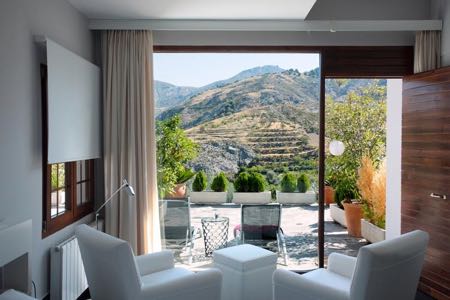 La Almunia del Valle is a fantastic, 11 room guesthouse in the hills just below the Sierra Nevada National Park. The traditional stone building has been beautifully modernised so that many of the original features survive. The views from the terrace and the pool are amazing. Inside the furnishings are creamy and there are fireplaces and exposed beams in beautiful wood to add charm. Rooms start from less than £100 per night.
Practical Details
The closest airport to the Sierra Nevada is Malaga, which is well served by UK airlines (the closest airport to the property is Granada which is not quite as well served by low cost airlines). Or you can take a train from St. Pancras, Ashford or Ebbsfleet to Granada via Paris and Madrid. During the summer months the maximum average temperatures in the Sierra Nevada go above 30°C, but during the winter months they’re around 12°C, and this region becomes a ski resort. 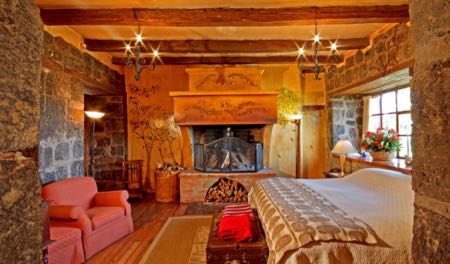 Getting Away From It All Adventure!
The Hacienda San Agustin de Callo is a charming, eight room hacienda sitting right in the shadow of the Cotopaxi Volcano, on the edge of an Ecuadorian national park. This is a fairly luxurious hacienda with its own horses, which are a great way to explore this unique landscape. And inside there are fireplaces, traditional murals, exposed stone and individually styled rooms. Rustic yet luxurious. Rooms start from around £300 per night.

Practical Details
Most people travel to this region vie Quito’s Aeropuerto Internacional Mariscal Sucre then catch a bus or drive down the impressive Pan-American Highway. You can’t fly direct to Quito from the UK, you’ll have to change somewhere, but KLM, Delta, United, American Airlines and Iberia all fly to Quito, so you could arrange flights leaving from any UK airport. The weather in this region is pretty consistent, with maximum averages at around 18°C all year round. It’s sunnier in the summer months and rainier in winter, though. 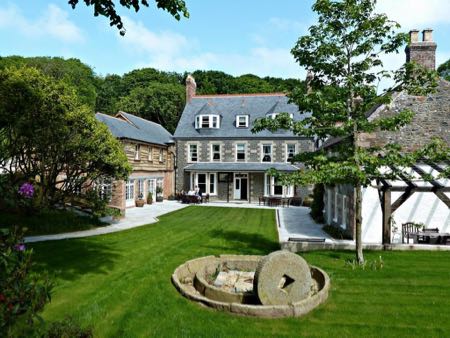 Getting Away From It All Without Leaving the UK?
Stocks Hotel is one of only two hotels that Hotel Guru recommends on the Channel Island of Sark which has a population of 600 and can only be reached by boat or helicopter. Once you’ve arrived on the island the only way to get around is by horse and cart or tractor. Stocks is Sark’s most luxurious hotel, which sounds like it’s not saying much, but it actually is. The 23 rooms and suites are spacious and there’s an outdoor pool – with a separate splash pool for children and an adult’s only jacuzzi – and plenty of homemade food to sustain you. And they’ll pick you up in the hotel’s horse and carriage. Rooms start from around £215 per night.
Practical Details:
Unless you charter a boat or sail yourself you can’t travel directly to Sark from the UK, you have to catch the ferry over from Guernsey. You can also catch the ferry to Guernsey from Poole or Portsmouth, or fly from a large selection of UK airports. Despite being closer to the equator than most of the UK, Sark’s climate is fairly mild, with top summer temperatures in the high 20s and winter maximums around 10°C.

About Us
The Hotel Guru has done your research for you. We’ve commissioned a collection of leading travel writers and journalists to offer their recommendations on where to stay, found out all the important, and minute, details about each property, and then cross referenced that with guides we respect. So if having a hot tub is important to you you can search by that, likewise pet-friendly properties or hotels with a great wine list.