How About A Holiday In Sunny Portugal. We've got 5 top notch destinations for you

I hadn’t intended to but I realise over the last couple of weeks I have been working my way around what I think of as some of Europe’s most summery destinations. It’s in the air: warm breezes always have me harking back to summer holidays past. But this year I seem to be receiving visits from the spirits of future summer holidays as well, as I dream about places I’ve always wanted to summer in. Anyway, this week I’ve been entertaining dreams of a holiday in sunny Portugal. And, seeing as I have the resource of the clever Hotel Gurus at my disposal, I’m letting my dreams run away with me. To the verdant Costa Verde, elegant Cascais, Peniche with its sparkling port and beautiful views, rural and wide-horizoned Alentejo, or the glorious Algarve.

As soon you see the Costa Verde you can tell where the name comes from – this stretch along Portugal’s sandy northwest Atlantic coast is emerald green. Come harvest time this lushness equates to a bounty of delicious riches to add to the rich history and cultural treasures the Costa Verde has to offer. Farmers have grown wealthy off this land and built some beautiful palaces and grand civic buildings – even in some of the smaller towns. Oh yes, this part of Portugal is very much more than just a very pretty beach. If you’re looking for a beach break the Costa Verda can oblige, but there are also vineyards – many producing the slightly raw tasting Vinho Verde, and the incredible Peneda-Gerês National Park to explore too. 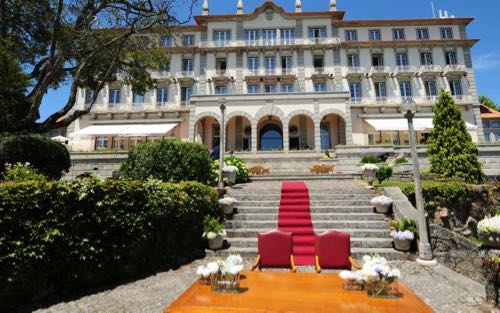 Where to Stay? The Pousada de Viana do Castelo is a beautiful hilltop hotel built in the 19th century, and its views over the Atlantic coast, and the port and beaches below the hotel, are amazing. The Pousada has 51 rooms, carefully and tastefully decorated in neutral tones, with their own private balconies. Prices start from around €127 per night including breakfast this summer, so it’s great value too.

Practical Details: The closest town to the Pousada de Viana do Castelo is Viana do Castelo, which is about an hours drive from Porto or four hours from Lisbon. You can also travel by train or coach from those cities, and both of them have airports with good direct links to the UK.

The Costa Verde is known for its mild weather, with warm, sunny summers and cool, wet winters. This is a great place to summer if you like warmth and sunshine, but not too much heat. During June the maximum daily average is 22°C, and during July, August and September it’s 24°C. 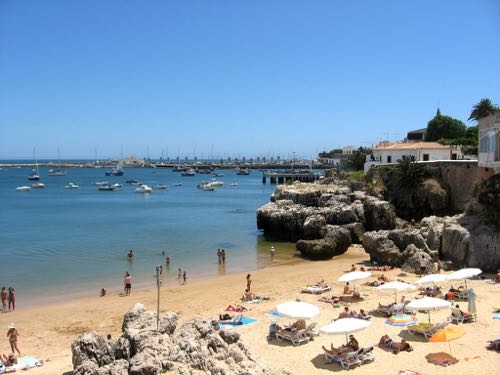 Just outside Lisbon, Cascais is one of Portugal’s first holiday destinations. King Luis was one of the town’s earliest tourists, circa 1870, coming from Lisbon to this, at the time, fishing village for sunshine and the sea. The Atlantic may be bracing but the fresh seafood is always excellent, the sunshine generous and there is plenty of beauty to appreciate after you’ve taken your dip. What has changed since Luis’ patronage in the 1870s is that this village has chi-chi-ed up into a sophisticated little town with more than enough hotels, a number of museums and some excellent restaurants. 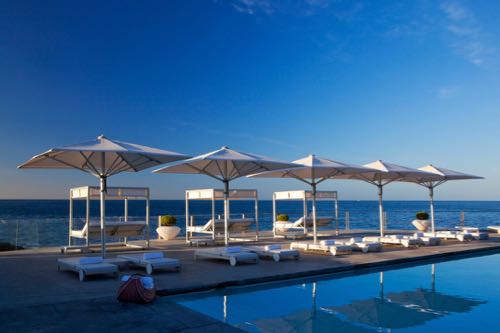 Where to Stay? The Farol Design Hotel is a trendy spot with clean lines, white everything and a stunning infinity pool which almost touches the sea. There are just 33 rooms, complete with balconies and sea views, and a room rate that starts from around €378 per night in high season. There’s also an excellent Mediterranean restaurant.

Practical Details: Lisbon airport is just 35kms from Cascais, and there are numerous direct flights from the UK. From the airport, either take the Metro or the Aerobus to Cais do Sodre station and then hop on the train towards Cascais. The total journey time is just under an hour.

Cascais is loved for its warm sunshine – the maximum daily average for June is 25°C, for July and August it’s 28°C, and for September it’s 27°C.

Peniche has a truly spectacular headland setting, surrounded by its fabulous beach and then the sparkling sea. So it’s no surprise that this working port is popular with beach lovers, but its precise conditions mean that it’s extremely popular with surfers too – as well as with anyone who fancies an historic walled centre packed with galleries and boutiques. 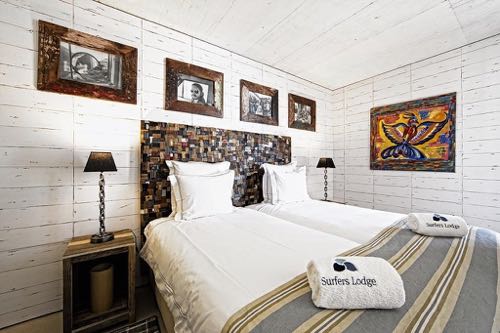 Where to Stay? The Surfers Lodge is a chic and trendy hotel close to the beach. There are just 17 rooms, all light and fairly spacious, with quirky art on the walls and some fantastic design touches made from reclaimed wood. There’s an outdoor hot tub, a fantastic roof terrace and a funky bar and restaurant. The lodge also has its own surfing academy. Rooms start from around €136 per night during the peak summer months.

Practical Details: Lisbon airport is closest again, about 60 miles or an hour’s drive away. But you could arrive via Porto too if that’s more convenient: it’s about two and a half hours away. From Lisbon airport you can get to Peniche by train, bus, taxi or hire car.

Peniche is warm, dry and sunny during summer, with June’s maximum daily average a reasonable 23°C. July’s is 24°C, August’s 26°C, and September’s is 25°C.

The Alentejo’s beautiful, rural scenery, which is warm and wide-horizoned and changes dramatically with the light, is one of the reasons this vast region offers the feeling of freedom. It’s a bit like Tuscany before everyone started visiting, but on a vaster scale. It reels you into the relaxed pace of life here amongst the vineyards and white towns and megalithic monuments. But, as well as the sense of space and freedom, Alentejo’s beaches beckon, with white cliffs and virginal sands. This is the kind of place which can give you the feeling of being the only souls on earth… 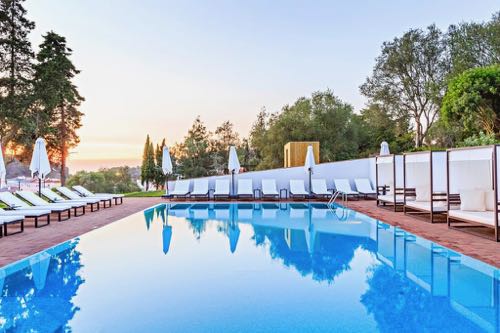 Where to Stay? Overlooking Santiago do Cacém, the Santiago Hotel is a stunningly angular contemporary property with 32 rooms. The white facade matches the whitewashed interiors, and the big windows make it all the easier to be transfixed by the wonderful view. The restaurant is a real draw, when it’s warm you can eat outside on a beautiful terrace, and if you enjoy your meal you might want to consider joining in the hotel’s cooking school? Rooms start from around €123 per night including breakfast.

Practical Details: The Guru’s recommendation is in Santiago do Cacém, which is equidistant between Lisbon and Faro – about two and a half hours’ drive from either. Both airports offer good direct links to multiple UK airports with multiple carriers.

The heat in the Alentejo during summer can be ferocious – especially in the interior – so if you’re planning to do a lot inland then visit during spring or September.

As Europe’s sunniest region – they say it’s official, and statistically it is sunnier than California – with a seemingly perpetual cloudless blue sky, the Algarve offers lovers of the outdoors not only numerous golf courses, but also superb diving, surfing, a rich diversity of bird life, and mile upon mile of golden sands, framed by the characteristic limestone rocks which stand guard out in the Atlantic. The August heat might encourage laziness and an addiction to cool waters, but at other times of the year visit the old Moorish castles and forts, walk up in the hills, fragrant with the smell of delicate almond blossom or sample the freshest of fish from the day’s catch at one of the rustic beach restaurants right at the sea’s edge. 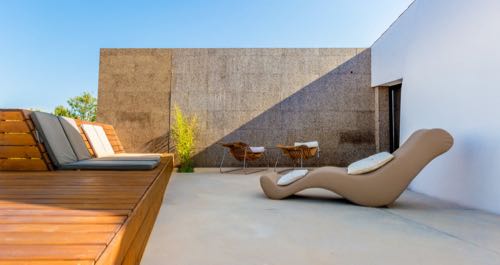 Where to Stay? Companhia das Culturas is a rustic hotel on a 40 hectare working farm.  Expect plenty of charm in the eight rooms and communal areas, plus yoga, Tai-chi and Qi-gong classes. The whitewashed rooms are furnished with antiques, and all have French doors leading out into the garden. There’s also a Turkish hammam and an outdoor, saltwater pool. Rooms start from around €120 per night B&B this summer.

Practical Details: Faro airport is the main airport in the Algarve, and B.A., Easyjet, Ryanair, Jet2, Thomas Cook and Tui all operate flights between the UK and Faro.

It has been mentioned before but the Algarve is known for its sunshine – about 300 days a year to be more specific, and about 12 hours a day during summer, with almost no rain. The eastern resorts are generally hotter than the western ones, but the difference is fairly minimal, and you can still expect maximum daily averages of 33°C in July and 32°C in August. June and September are slightly cooler, with a daily maximum average of 29°C.