I don’t know if it’s the change in temperature, but something has driven me to our house’s least visited places for a clear out. People talk about spring cleaning, but in our house we’ve always done the big ‘rationalisation’, as my husband calls it, in autumn. And this week I discovered a wonderful treasure! A photo album which had become uncoupled from its compadres, which transported me back to a holiday we took the children on when they were small.

I remember the rationale behind our choice of destination very clearly. One of our children was a very fussy eater and we based our decision entirely on cuisine. What food was said child willing to eat without too much of a scene? The top answers were sausage, bread and cheese. So we went to Bavaria. Land of fairytale castles and medieval hamlets, of Wagner and magnificent flower-filled alpine meadows, of lederhosen and beer gardens. And it was a fantastic choice. We drove and walked and saw and ate. It was a magical place. And so of course I now simply must go back. So where to go and where to stay? Here are the Hotel Guru’s recommendations for holidays in Bavaria – and the last one is quite magical…

Why don’t you stay along the romantic ‘Romantic Road’?

Converted from an 11th century castle, the Hotel Herrnschlossen is an eight room charmer in Rothenburg ob der Tauber. This historic hotel has country-style decor with original brickwork and original generous proportions, but all the mod. cons. are present and correct too, including a cellar sauna conversion and a Gothic style restaurant with an impressive menu. There’s also a charming garden. Rooms start from around €195 per night B&B.

Practical Details: Rothenburg ob der Tauber is a Bavarian medieval gem right on the ‘Romantic Road’, and overlooking the lush Tauber valley. Is it old world or fairytale? Along these narrow, cobbled streets you can’t always tell! If you’re not travelling the Romantic Road and you want to fly in, Nuremberg Airport is closest, although Frankfurt or Munich have the better international services. You can also travel to Rothenburg ob der Tauber by train. The Romantic Road is beautiful all year round, drenched in sunshine or in snow.

The Chalet Hotel am Kiental is in the centre of pretty Herrsching, which is right on the shore of even prettier Lake Ammersee, in the very heart of the picturesque Bavarian Lake District. With nine spacious rooms arranged in a collection of old buildings, and an award winning restaurant with a good wine list, this is a great base for exploring the region, or a bolthole escape from Munich, which is only about 30 minutes away. Rooms start from around €145 per night.

Practical Details: Munich Airport is about 30kms northeast of Munich, and it’s definitely the easiest major centre from which to start your Bavarian lake odyssey. It’s obvious to say, but the summer months are the most popular time to visit the lakes, however this region is most pleasant during spring and early autumn too.

What about an atmospheric stay in the heart of medieval Regensburg, on the Danube?

The most memorable thing about the Hotel Orphee, which occupies an original Baroque building in the heart of Regensburg’s pedestrianised Old Town, is probably its restaurant. And though it has 25 charming rooms, its restaurant is so good that for many it’s more of a restaurant with rooms than a hotel. When it’s busy the restaurant spills out into a covered courtyard at the back. The rooms are highly individual and very eclectic – so have a good look at the photos and request your favourite. They all have generous proportions and spacious, old fashioned bathrooms, and they start from around €150 per night B&B.

Practical Details: Regensburg has been an important trading centre on the Danube for millennia, and its architecture is testament to the town’s wealth and importance. Most of the really exceptional buildings went up between the 11th and 13th Centuries. This is the fourth largest city in Bavaria after Munich, Nuremberg and Augsburg, but it doesn’t have its own airport. If you want to drive by plane you need to travel to Munich and then take to the roads or the rails after that.

Or how about a Bavarian Hamlet with picturesque beer gardens and mountain views?

Try the Brauereigasthof Hotel Aying in Aying, a 100 year old hotel with 48 spacious rooms and suites furnished in an elegant and traditional style. The restaurant is superb and there’s a spa as well – both perfect if you’re using the hotel as it was designed to be used, as a base for exploring the region on foot or using pedal power. Rooms start from around €169 per night B&B.

Practical Details: Aying is a small, pretty village surrounded by stunning countryside and probably best known for its brewery, the Ayinger Brewery. Being home to a brewery means the beer gardens are particularly well stocked and Aying looks like the Bavaria you might imagine. As far as arriving in Aying, Munich is the closest hub again, from there you’ll need to catch a train or drive.

Or why not luxuriate in a Fairytale Schloss? 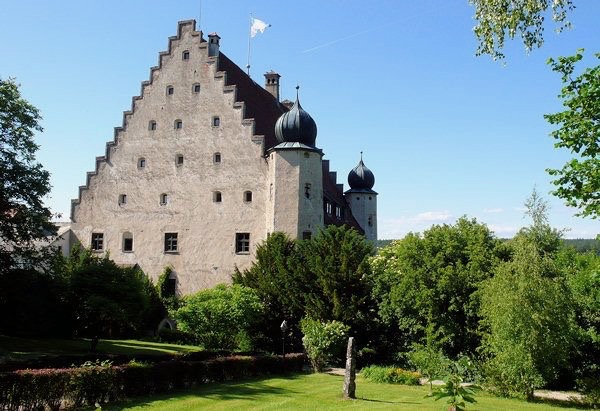 Schloss Eggersberg is the kind of castle you get when you take the Bavarian fairytale template and give it to an architect with an eye for the practical as well as the beautiful. There are 15 rooms, all individually decorated and all charming – expect antique furnishings, ornate beds and classical decor. The gardens are beautiful, the suppers romantic and the location, in the tiny village of Eggersberg, feels quintessentially Bavarian. Surprisingly, because this is a castle, rooms start from around €120 per night including breakfast.

Practical Details: Overlooking the picturesque Altmühl Valley, Eggersberg is a small hamlet within the valley’s nature reserve. Riedenburg is the closest town, and has three castles, one of which is known for its falconry displays. But again, Munich is the closest major transport hub, and from there you’ll need to catch a train or drive.

Hotel Guru has done your hotel research for you.  We’ve commissioned a collection of leading travel writers and journalists to offer their recommendations on where to stay, found out all the important, and minute, details about each property, and then cross referenced that with guides we respect.  So if having a hot tub is important to you you can search by that, likewise pet-friendly properties and hotels with a great wine list.

Did you miss last week’s recommendations for idyllic lakes and lakeside hotels in Europe? Click here to find out what they are…