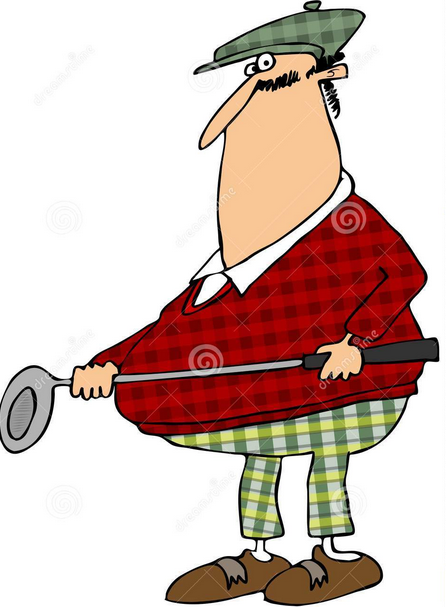 A few years ago, our local golf club transformed itself, at vast expense, into a country club. It now boasts a large well equipped gym, pool, spinning room and exercise studio, as well as a creche, beauty treatment rooms and a lot of disgruntled golfers. The restaurant menu manager ditched the once-beloved calorific dishes that were relished after an appetite-inducing 18 holes, in favour of ‘homemade fat-free soup’, ‘freshly squeezed papaya juice’ and 9 varieties of sparkling and still water. The sartorially-misguided amateur golfers rarely have a smile for the gym goers, preferring instead to act as if we weren’t actually there. The braver ones cancelled their membership, but most put up with the lycra-clad invasion.

Anyhow, I joined so that I could do some Pilates and yoga – I leap out of bed each morning if I exercise, or creak out if I don’t. And becoming a member gave me an excuse to leave the ironing pile untackled. At first, despite what I’d been told, I didn’t find it at all sociable. Yes, I smiled at other people in my classes and occasionally chatted inanely about whether the air conditioning needed turning up or down. But mostly I stood on my blue exercise mat looking rather uncomfortable, especially  if I accidentally caught a glance of my disappointedly lumpy body in the mirrored wall. Everyone else seemed to be in a highly amusing conversation with someone. Then the class would begin and, paradoxically, I could start to relax. The hour always seemed to whizz by and then I’d escape to my car as quickly as I could. Weirdly, I am quite a sociable person and have several really good friends but, come to think of it, hardly any of them belong to a health club. And, to be fair, I didn’t actually go to the classes to make new friends. I just assumed it would be a side effect of mucking about in lycra with other like minded women (and the occasional man). 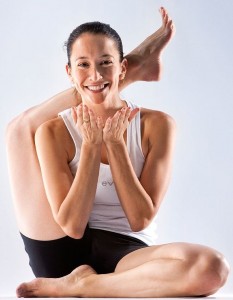 These days I don’t feel so awkward – well, I’ve been a member there since 2008, so you won’t be surprised to hear me say that. Obviously over the weeks and months, assessing stares turned into fleeting smiles and then the odd conversation started up. So it may have taken me longer than most, but I finally got to make some gym buddies. I’ve even been on a couple of retreats with some of them. What I haven’t managed to do though is achieve my secret (and probably pointless) ambition to get my leg around my neck again, like I used to be able to do when I was eight.

annabelandgracecw
•
Follow
Four Henley Blondes - from left to right, The Page Turner, Backpacking Granny, @janegordon5100, Annabel and 4 Doodles doing our daily walk. We are determined to keep moving and fit. One of us turns 80 next birthday, and she turned up in gold leggings, leopard print gloves, a stylish hat and excellent makeup. She put the rest of us to shame!! . #henleyblondes #womenover70 #womenover60 #womenintheir60s #womenintheir70s #keepmoving #gettingfit #10000steps #dailywalk #doodlesofinstagram #dogwalking @grannygoldie @janetrotman1
View on Instagram |
2/9

annabelandgracecw
•
Follow
Grace working with her trusted @officialfilofax Read why she loves it in her latest Lifestyle Essentials post which also includes many other products eg @viviscal.uk for thinning hair and a bobble remover for knitwear. It’s all in our latest edition of the Annabel & Grace online magazine for #womenover50 . #annabelandgrace #annabelandgracemagazine #timeofourlives #womenintheir60s #womenover60 #womenover70 #lifestyleessentials
View on Instagram |
3/9

annabelandgracecw
•
Follow
Who would you rather not be without apart from family and friends? For Grace it’s Janice who has been keeping her house spotless for over a decade and she’s a dab hand at sewing too. “Thank you J - you truly are my treasure!” . #housekeeper #houseproud #lifesaver #couldntdowithout #personaltreasure #bestkeptsecret #annabelandgrace #annabelandgracemagazine #womensupportingwomen
View on Instagram |
5/9

annabelandgracecw
•
Follow
I found these pics of Grace which were taken a few years ago by a wonderful photojournalist and friend Clive Limpkin, who sadly moved on in 2020 to that great photo studio in the sky. He worked for the @dailymail for 20 years. He was award-winning for his iconic images of Derry (the Battle of Bogside) in the late 1960s and early 1970s and they came to define the NI Troubles. I love these photos of Grace as Clive has managed to capture her fun-loving spirit and ‘joie de vivre’. Nothing beats a smile and even better laughter! We miss Clive but he is never forgotten. . @alexlimpkin . #grace #annabelandgrace #womenintheir60s #womenover60 #photoimage #laughter #greatsmile #timeofourlives #naturalbeauty
View on Instagram |
6/9

annabelandgracecw
•
Follow
There is a house in Henley-on-Thames that is for sale. It is called Bird Place - grade 2 listed with wonderful river frontage. One of the current owners is an artist and she regularly paints the hoarding that is roadside reflecting the seasons. This one was last winter’s mural but it seems perfect for the cold spell🥶 that we are all experiencing so I thought I would share the pics. Such a great way to cheer up what would have been a dull wooden fence. . #henleyonthames #birdplace #mural #coldspell #winterweather #annabelandgrace #annabelandgracemagazine #lovewherewelive #riverthames #riverside #riversideliving #wrapupwarm #frost #snowscene #wallart
View on Instagram |
7/9

annabelandgracecw
•
Follow
Last night I had a supper party - it was a hangover from Christmas ie friends who we had had to postpone for one reason or another. We celebrated Chinese New Year - the year of the rabbit. So we all dressed up a bit (sparkly boots and a few seasons ago skirt from @hopefashion) Dressing up a little made it all feel a bit more special. What to cook? No not Chinese as I am not very good at that! But no problem as Grace had just done a fabulous post - ‘Tastebud Pleasers: Grace’s favourite recipes of 2022’ and so I made Roasted Chicken Orzotto Milanese-Style (@janelovettcookery ) followed by a Plum and Apple Galette (@riverford ) We started the evening with a @pinkstergin G&T! . #supperparty #saturdayevening #supperwithfriends #dressingup #sparkle #recipes #tastebudpleaser #cookinginspiration #annabelandgracemagazine #annabelandgrace #womenover50 #womenover60
View on Instagram |
8/9

annabelandgracecw
•
Follow
End of another week and the next edition of A&G complete. Newsletter gone out to our subscribers. Time for a coffee and even though it is really cold there is nothing better than a quick bout of fresh air. We have both been trying to keep up our daily walk and exercise even just a quick 10 minute stretch in the morning is better than nothing. I have started doing some breath exercises too as I suffer from sinusitis so I think it may help. Grace is kept busy looking after her nonagenarian mother and stepfather. I spoke to her during the week and she was pushing her mother in a wheelchair around Waitrose. I think she can count that as exercise! Mobility is so important and so we need to keep fit and strong for as long as we can. Having said all of that both of us have had niggles with our hips recently. I am taking Strong Bones from @futureyoucambridge and doing lots of yoga with @yogawithmaddy.co Maddy has taught me some great stretches for my hips and my lower back which I try to do daily. Wasn’t it Mae West who said, “Getting old is not for the faint of heart.” Youth and adulthood are also not without their challenges but if you can keep a smile on your face and all body parts moving you are doing well!! Have a great weekend, A&G xx . #womenover50 #womenover60 #womenover70 #annabelandgracemagazine #annabelandgrace #onlinemagazineforwomen #weekend #coffeebreak #womenintheir60s #womenintheir50s #keepingmoving #keepingfit #smile
View on Instagram |
9/9
View on Instagram
Tweets by @Countrywives